The global power liftgate market was valued at ~$4 billion in 2020. These liftgates use a powerful hydraulic system to decrease the human effort in lifting heavy objects into vehicles, thus shortening the process. Hands-free power liftgates have a precise switch locking mechanism and capacitive motion sensors integrated into the vehicles bumper, for smart access; as a result, the adoption of hands-free power liftgates is predicted to grow in demand significantly over the forecast period.

The COVID-19 pandemic has significantly disrupted the automotive industry by leading to a downfall in the demand for vehicles. The major hindrances for the market currently are non-operational factories and lower manufacturing and sales of equipment as a result. However, the rising demand for commercial vehicles with power liftgates in the logistics and transportation sector is expected to support the market growth with conditions returning to normal and the resumption of operations in different industries. 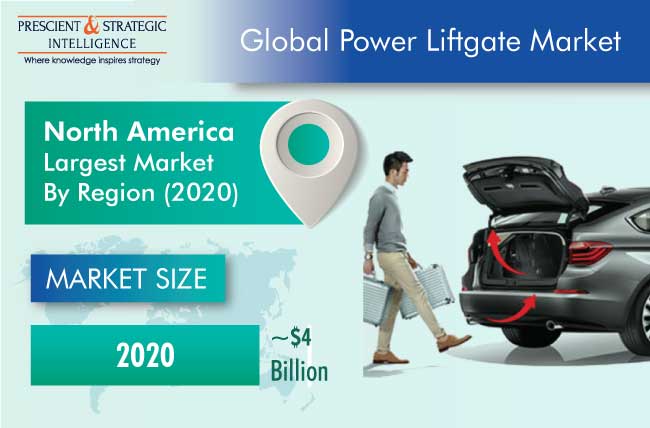 The hands-free category is expected to witness the faster growth in the market for power liftgate during the forecast period, on the basis of system type. Automakers all over the world are incorporating modern features in their vehicles to provide customers with greater convenience.

Geographically, APAC is expected to witness the fastest growth during the forecast period due to the rising disposable income of its middle-class and its high living standards and rising car sales. Other factors driving the market include the need to increase customer comfort and convenience, increasing sales of electric vehicles due to the strict emission regulations, increasing demand for autonomous vehicles, introduction of the hands-free power liftgate technology, and increasing demand for sensors and a range of other electronic devices/components in automobiles. 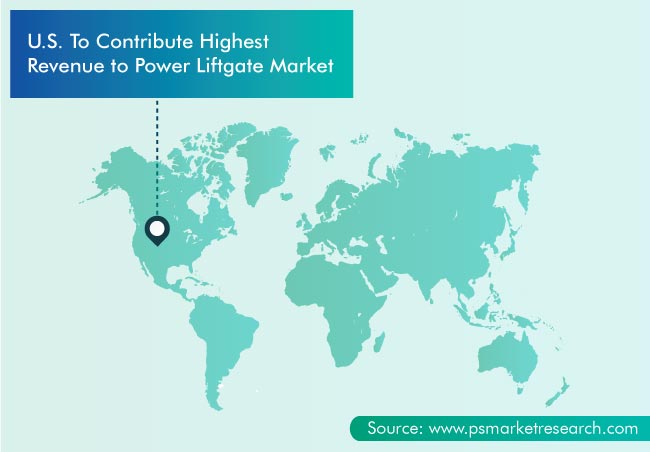 Advanced technologies are being extensively used by manufacturers to offer safety, security, and comfort in their premium vehicles. These include a variety of services for customers, such as navigation, remote access, and security. Original equipment manufacturers (OEMs) are now looking at power liftgates as a way to add value to vehicles. Since this technology helps improve passenger comfort, all major car manufactures are incorporating this technology in their newer models. A power liftgate motor, deck lid cable drive, capacitive sensor system for hands-free door opening and closing, and a lift gate lock with a power cinching unit make up the power liftgate system. Thus, the continuous expansion of the automotive industry is set to boost the power liftgate market growth over the forecast period. 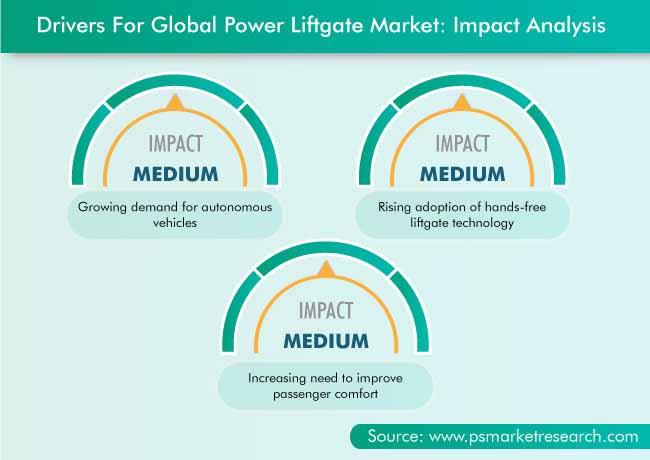 The key factors driving the development of the power liftgate market are the surging need for the ease of driving and growing concern for vehicle and passenger safety. As a result, automakers are developing advanced technology to improve road safety and create intelligent transportation systems, such as the advanced driver-assistance system (ADAS) and self-driving. Since autonomous vehicles use the power liftgate technology, the market is set to grow with the adoption of such vehicles.

Major players in the power liftgate industry have been focusing on product launches and facility expansion in order to gain momentum and increase their market share during the forecast period.

Frequently Asked Questions About This Report
How much revenue did the global power liftgate market generate in 2020?+

The global power liftgate market reached revenue of ~$4 billion in 2020.

What are the major vehicle type categories in the power liftgate market?+

How has the market for power liftgates been segmented?+

The market for power liftgates has been segmented on the basis of vehicle type, system type, and region.

What is the biggest trend in the market for power liftgates?+

The incorporation of advanced connected features in automobiles by manufacturers is the major trend currently being witnessed in the power liftgate industry.

Why is the power liftgate industry booming?+

The power liftgate industry is booming due to the burgeoning demand for autonomous vehicles.