The global power electronics market size was $38,522 million in 2021, and this number is expected to increase to $56,269 million by 2030, advancing at a CAGR of 4.3% during the forecast period. This can be ascribed to the rising infrastructure development activities, increasing consumer spending, high R&D expenditure, mounting need for energy-efficient products in automobiles, data centers, 5G devices, and other pieces of telecom infrastructure, rising number of vendors, and growing electricity generation industry. 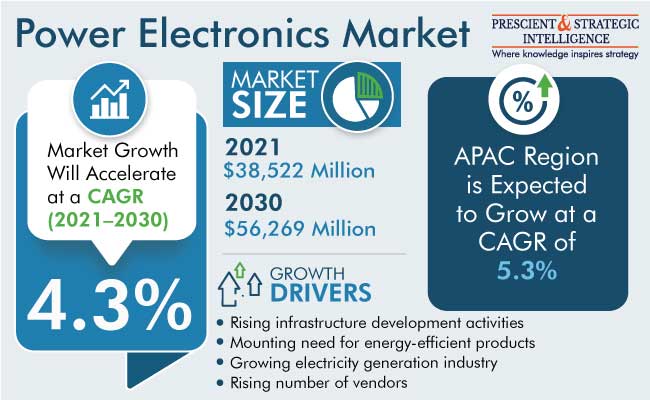 The silicon category accounted for the largest revenue share in 2021, and it is expected to grow with a substantial CAGR during the forecast period. This can be ascribed to the high usage of these variants in multiple verticals, such as consumer electronics and ICT, which are themselves advancing; the surging demand for them from emerging economies, including China and India, and their high cost-effectiveness. Furthermore, the product demand is driven by their growing use as a substrate in the majority of the semiconductor wafers, as well as in low-power applications.

Additionally, the gallium nitride (GaN) category will witness the highest growth rate over this decade. This will be due to the several advantages of GaN-based semiconductor devices, such as higher energy efficiency, faster device speed, and cost-efficiency, which make them ideal for computers, smartphones, TVs, and cameras. Moreover, the increasing demand for energy-efficient GaN components and power semiconductors in wired communications will drive the market advance. 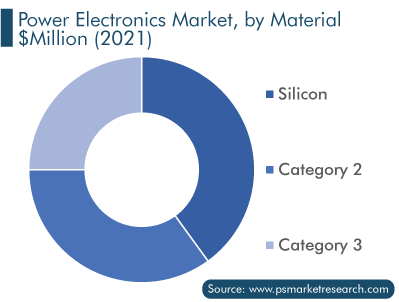 The modules category will witness the fastest growth during this decade, with a CAGR of 5.2%. This can be ascribed to the widespread usage of these components in wind turbine inverters, micro-inverters, and photovoltaic inverters, where these modules are critical components of the power architecture. In this regard, the market growth is influenced by the increasing need for renewable resources, which require converters to change DC to AC and vice versa.

Furthermore, the discrete category accounted for the largest revenue share in 2021, and it is further expected to maintain its dominance during the forecast period. This is because industrial appliances’ electricity consumption and noise can be reduced with power discrete devices, including IGBTs, BJTs, and MOSFETs. Thus, the need for these products will increase as they are increasingly being used in electrical power grids, industrial motor drives, inverters, and DC–DC converters.

The low-voltage category will witness the highest growth during the projection period, with a CAGR of 4.9%. This is due to such products’ extensive deployment in consumer electronics and the advancement in energy harvesting techniques. Moreover, the high usage of power electronics in automobiles to provide standardized output, thermal control, and control interfaces, with the help of converters, is the prime factor contributing to the industry advance.

The key vendors in the power electronics market are focusing on energy conservation, to remain competitive. Several vendors are working to increase the power density of their electricity-driven products, thereby raising their energy efficiency and helping end users conserve resources over a long period. The depletion and rising cost of fossil fuels make energy conservation a mandatory requirement and a trend that could trigger revenue growth for the players over the next few years.

Currently, a number of nations are switching from fossil fuels, such as coal and gas, to renewable sources. As a result, the number and total capacity of renewable installations have been growing steadily, while non-renewable source share in the power mix has been declining at the same time. Power electronics are crucial in the transition to more-efficient renewable sources. As wind and solar energy systems are the most-potential renewable sources, power-electronics-based AC–DC converters are frequently used in solar panels, wind turbines, fuel cells, batteries, and capacitors.

To handle the varying electricity requirements, these systems can be integrated with different kinds of power electronics. When sunlight falls directly on the PV panels, for instance, they may convert solar energy into electrical energy with the highest efficiency. A power electronics converter transforms the direct current produced by the solar cells and the alternating current produced by wind farms into alternating current, for use in common applications. Furthermore, power electronics can be used to store the energy produced by these devices in batteries, converting the output first to DC.

Consumer electronics accounted for the largest revenue share in 2021, and they are further expected to dominate the vertical segment during this decade. This can be ascribed to the increasing number of consumer electronics manufacturers, expansive consumer base for these gadgets due to the rising income and improving standards of living, and the high rate of adoption of advanced-technology-based products.

The integrated power electronics technology is central to the functioning of consumer products, such as televisions, laptops, smartphones, computers, LCDs, and DVD players. The swift adoption of advanced technologies, at the same time maintaining a supply of electricity in these devices, drives the incorporation of power electronics.

APAC accounted for the largest revenue share in 2021, and it is further expected to maintain its position during the forecast period with a CAGR of 5.3%. This is due to the increasing population, rapid industrialization, surging demand for renewable energy, improving consumer spending, growing trend of EVs and HEVs, availability of skilled and cheap labor, large consumer base for end products, rising adoption rate of advanced technologies, and favorable government initiatives supporting the renewable energy industry.

North America also contributed significant revenue in 2021. This can be attributed to the increase in the pace of technological advancement in the end-user industries, rise in the internet penetration, massive adoption of smartphones, and surge in the sale of EVs, owing to the need for carbon emission reduction.

In recent years, the players have spent a considerable amount on R&D to stay ahead of their competitors and gain a larger share. In addition, a key buying criterion for customers for a wide range of products is energy efficiency, which can be achieved and improved through R&D. 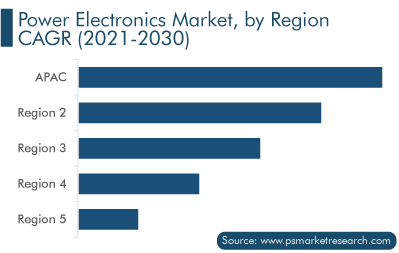 The report analyzes the impact of the major driers and restraints on the market, to offer accurate market estimations for 2017-2030.

Frequently Asked Questions About This Report
How much is the power electronics market worth?+

What is the forecast CAGR of the power electronics industry?+

What are the key trends in the power electronics market?+

Technological advancements and energy efficiency are the major trends in the market for power electronics.

What is the leading vertical in the power electronics industry?+

Which region is the most lucrative for power electronics market growth?+

APAC will be the most lucrative in the market for power electronics.