Ultrasound waves travel with different speed in different medium. The medical ultrasound system operates at higher frequencies, typically 1-10 MHz. The ultrasound machine calculates the distance from the probe to the tissue or organ, using the speed of the sound in the tissue and the time of the each echo returns. 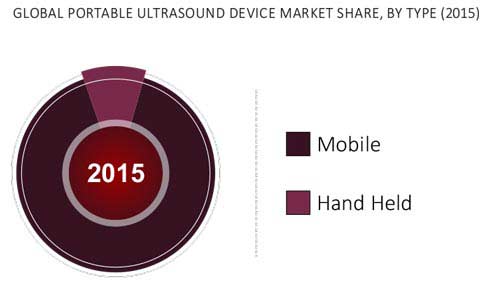 Ultrasound is used in both diagnosis and therapeutics purpose. Ultrasound imaging is a medical imaging technique, which uses high frequency sound waves and their echoes to produce cross-sectional images of the body. It is easy to operate, easy to move in remote areas, and does not use ionizing radiation. Portable ultrasound device is mainly used at point-of-care, as they are convenient to carry and they are lighter and smaller.

Geographically, Europe is expected to maintain its dominance in the global market of portable ultrasound device during 2016-2022. This is due to increasing healthcare expenditure, growing geriatric population, and growing prevalence of chronic diseases in the region. In addition, the improved healthcare infrastructure is also driving the growth of the European market.

The North American portable ultrasound device market is growing, mainly due to growing aging population, increasing prevalence of chronic diseases, and increasing healthcare cost. However, the Asia-Pacific market of portable ultrasound device is expected to witness the highest growth globally, during the forecast period. This is due to the growing geriatric population and surge in the occurrence rate of different chronic diseases. Additionally, the large population pool and improving healthcare infrastructure are driving the growth of the market in the region.