The global polyurea coatings market sales revenue crossed $995.2 million in 2021, and it is expected to advance at a CAGR of 11.0% during 2021–2030. Due to the rising environmental concerns and need for sustainable development, polyurea technology holds a major place in the coatings industry, garnering high investment in research and development.

The building and construction, automotive and transportation, and industrial sectors are among the key end users of these materials. Furthermore, the demand from the defense and marine industries for polyurea coatings has increased, as they protect military and marine equipment against chemical reactions and environmental damage. 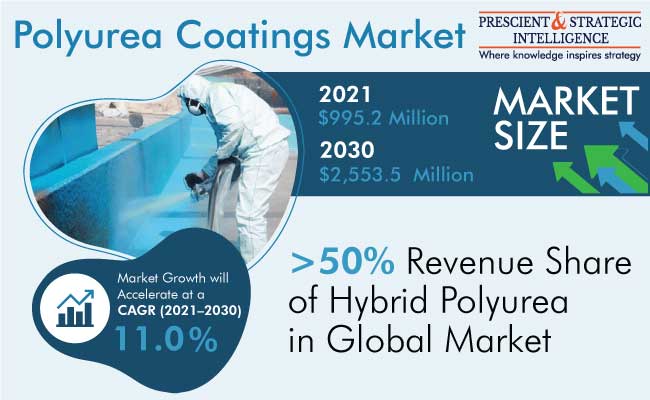 To make matters worse, buyers have a lot of negotiating power in the market. Several well-known manufacturers offer the same product at varying prices and levels of quality. Because switching costs are minimal, buyers can more easily choose one product over another. Most clients are price-sensitive and may choose less expensive-products.

The demand for polyurea coating will increase in the APAC region with a CAGR of 11.9% during the forecast period. The high-pace economic growth and significant investment by government and private companies in various sectors, including maritime, automotive, manufacturing, and building and construction, are driving the region's demand for industrial coatings.

The U.S. and Europe have been at the forefront of the Industrial Revolutions over the last two-and-a-half centuries, but Asian countries have made a significant progress in the past few decades. A huge investment in infrastructure and a growing manufacturing base, because of the lower labor cost, are being seen in developing Asian countries, including China, South Korea, Singapore, Hong Kong, Taiwan, India, Indonesia, and Malaysia. Moreover, the demand for high-quality items is surging in the region as the middle-class population's disposable income rises, all of which is leading to a surge in the demand for polyurea coatings.

The Chinese polyurea coatings market share was 25.4% in 2021 in the region due to the growth of the construction, automotive, and manufacturing industries.

Construction is India's second-largest industry; thus, it has a huge impact on the country's economy. Central government programs, such as the Pradhan Mantri Awas Yojana, are the key drivers of growth. The Indian government is investing in infrastructure development to cater to the demands of an ever-burgeoning population, which will boost the usage of polyurea coatings in the infrastructure sector.

Similarly, in Japan, the automobile industry, which is home to strong domestic manufacturers, such as Honda, Toyota, Nissan, Mazda, Mitsubishi & Subaru, Kawasaki, and Yamaha, has a significant economic influence. The growing Japanese vehicle sector is likely to expand the demand for polyurea coatings in the country. 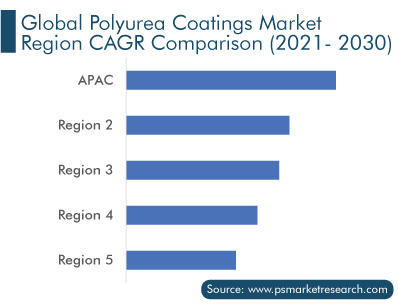 In 2021, the automotive and transportation industry had the second-largest market share, of 25.7%. Polyurea coatings are utilized on the exteriors of automobiles, including trucks and two-wheelers. They are commonly seen on the chassis, transmissions, gearboxes, driveshafts, and engines, as they offer good resistance to the external physical and thermal pressure.

As a result, polyurea coatings are becoming a popular choice among automakers. Germany, China, and Japan are the top three passenger automobile producers. As a result, polyurea coatings’ applications have developed greatly in these nations. Volkswagen, Audi, Mercedes, Opel, Porsche, and BMW are all part of Germany's highly competitive automobile sector. This industry generates around $468.5 billion, which accounts to approximately 20% of the total German industrial revenue.

Most truck manufacturers now use spray-on protective coatings that are not only attractive but also provide long-term protection. Polyurea coatings offer resistance to dynamic and static impact, corrosion, UV rays, and abrasion. These materials improve the appearance of substrates, while also keeping equipment safe for a long time with few resources. Polyurea coatings are commonly utilized as a primer alternative on vehicle chassis and as topcoats on vehicle bodywork. Hence, the increasing production of heavy-duty vehicles is predicted to significantly drive the market growth. 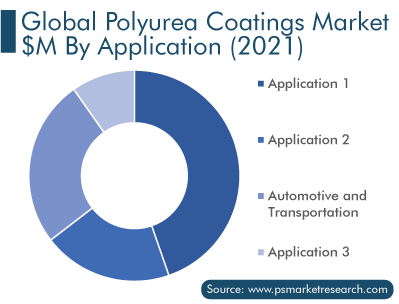 The weather in North America and Europe favors the use of aromatic polyurea coatings, which are often less expensive than aliphatic alternatives. Aromatic isocyanates are employed as a basecoat, which means they are the first layer applied to any surface. As a result, they are widely utilized in automobiles, which is why the aromatic polyurea coatings market size is predicted to grow rapidly.

The worries about the safety of medical institutions will provide chances of growth for polyurea coating manufacturers. These products are used to waterproof hospital floors and other infrastructure. Some medical buildings include extensive flooring or long pavements. Coatings are used in great quantities in these buildings, as a result of which polyurea coatings manufacturers are projected to see an increasing demand.

Polyurea coatings are widely employed in the construction of buildings and public structures; therefore, the market growth is likely to accelerate in the next few years. However, it is critical that they do not leak any harmful gases. The increasing knowledge, growing environmental concerns, and tougher government laws on VOCs have generated a business opportunity. VOC emissions are strictly regulated by coating producers due to their negative impact on health and the environment. As a result of these requirements, manufacturers are focusing on green coatings or eco-friendly coatings, by increasing R&D spending substantially.

Smart coating technologies have a lot of potential in terms of the corrosion resistance, durability, and conductivity. In the automotive and transportation business, smart coatings are used to coat automobile surfaces. They provide corrosion protection as well as aesthetic qualities to substrates. Smart coatings are one of the most-significant advancements in the automobile coatings business, as they give greatly enhanced surface durability, while also introducing extra functionality or features such as self-healing, super hydrophobicity, soundproofing, self-sensing, and vibration reduction.

The aerospace, defense, medical, marine, and oil industries are being encouraged to incorporate multi-functional coatings in their products due to the significant benefits smart coatings offer.

To Increase Market Share, Companies Involved in Mergers and Acquisitions

Players in the market have been involved in mergers and acquisitions to remain competitive. For instance,

The research offers the market size of the global polyurea coatings market for the period 2017–2030.

Based on Raw Material

Frequently Asked Questions About This Report
What is the key driving factor for the polyurea coatings market?+

The market for polyurea coatings is majorly driven by the growth in the construction and automotive sectors.

What is the forecast growth in the polyurea coatings industry?+

What will be the polyurea coatings market value in the future?+

What is the competitive scenario of the polyurea coatings industry?+

Currently, established players dominate the polyurea coatings industry owing to the similarity of the products, which makes it difficult for new companies to enter it.

Why does North America dominate the polyurea coatings market?+

North America is the largest market for polyurea coatings because of the surging environmental concerns and the weather of the region, which supports these coatings over those with an aliphatic base.