The global polyethylene glycol (PEG) market was valued around $4.5 billion in 2020 from 2019, and it is expected to witness substantial growth during the forecast period (2021–2030). The major factors responsible for the growth of the market include the rising demand for PEG as a surface-active agent and specialty solvent in toothpastes, creams and lotions, shampoos, conditioners, deodorants, lipsticks, soaps, bath oils, and detergents. In addition, PEG is rather important in various other industries, such as medical, paint and coating, paper and ceramics, automobile, and construction.

During the COVID-19 pandemic, the operations of the manufacturing sector were disrupted due to the stringent lockdowns that were implemented in most of the countries. Moreover, the closing of international borders severely affected the economy. PEG is widely used in drugs as a carrier molecule, and further, two of the U.S. Food and Drug Administration (FDA)-approved vaccines, of Pfizer and Moderna, have it. Thus, there has been an overall positive influence on the polyethylene glycol market. 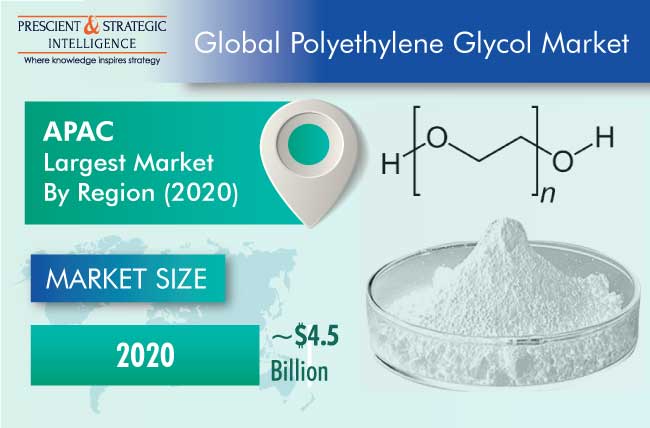 The opaque liquid category held the largest share in the polyethylene glycol market in 2020, based on form. This was mainly due to the high usage of this form of PEG in the pharmaceutical industry as a release agent and excipient for capsules.

The PEG 400 category held the largest share in the polyethylene glycol market over the past few years, and it would continue to grow at a significant rate in the coming years, based on grade. This will mainly be due to the fact that PEG 400 is a low-molecular-weight grade with low toxicity. Additionally, it is hydrophilic in nature, which renders it a useful ingredient in drug formulations to augment the solubility and bioavailability of weakly water-soluble drugs. It is also used in ophthalmic solutions for relief from burning, irritation and/or discomfort that follows the drying of the eyes.

The medical category held the largest share in the polyethylene glycol market, both in terms of volume and revenue, in 2020, based on application. This is attributed to the increasing application of PEG in the medical sector, in part due to the rising healthcare expenditure around the world.

Geographically, the APAC region held the dominating share in the polyethylene glycol market over the past few years, and it would continue to dominate it in the forecast period. This is mainly attributed to the rising usage of PEG in the growing medical and pharmaceutical, automotive, and building and construction sectors. In this regard, the increasing use of water-based coatings, paints, and inks in the construction industry is likely to boost the market. 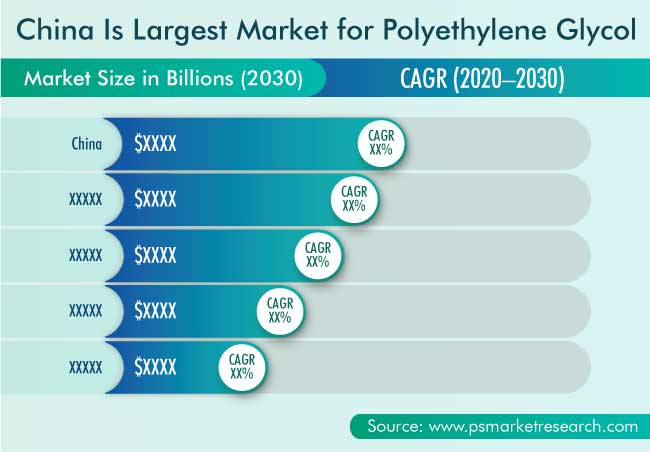 Technological Advancements in PEG Manufacturing Process is a Key Trend

Polyethylene oxide, or high-molecular-weight polyethylene glycol, is synthesized by suspension polymerization. It is necessary to hold the growing polymer chain in the solution during the polycondensation process. The reaction is catalyzed by magnesium-, aluminum-, or calcium-organoelement compounds. To prevent the coagulation of polymer chains from the solution, chelating additives, such as dimethylglyoxime, are used. Nowadays, various research and development (R&D) activities are underway to find new ways to produce PEG that can be eco-friendly, cheap, and energy-efficient. Hence, technological advancements in the manufacturing process are a key trend in the market for polyethylene glycol.

The pharmaceutical industry’s growth in emerging economies, including China, India, and Brazil, coupled with the increasing expenditure on technological advancements, is expected to drive the market for polyethylene glycol. It is used as an inactive ingredient in the pharmaceutical industry, as a solvent, surfactant, plasticizer, ointment, and suppository base for tablets and capsules. Furthermore, the outbreak of new diseases and surging cases of obesity, skeletal problems, cardiovascular diseases, and hypertension will contribute to the increasing healthcare expenditure across the globe, which, in turn, will propel the demand for PEG.

In recent years, players in the polyethylene glycol industry have been involved in expanding their production capacities to gain a significant edge, globally.

Frequently Asked Questions About This Report
How big is the polyethylene glycol market?+

The market for polyethylene glycol valued about $4.5 billion in 2020.

Which grade is the most popular among polyethylene glycol industry end users?+

Most end users in the polyethylene glycol industry prefer the PEG 400 grade.

China is the largest market for polyethylene glycol.

What is the biggest reason for the polyethylene glycol industry’s growth?+

The polyethylene glycol industry is majorly being driven by the expanding pharmaceutical industry.

What is the strongest growth strategy in the polyethylene glycol market?+

To grow in the market for polyethylene glycol, the players are augmenting their production capacity.