The photonics market revenue stood at $576.8 billion in 2019, and it is expected to rise to $1,214.5 billion by 2030, while demonstrating a CAGR of 6.9% during 2020–2030. Globally, the Asia-Pacific (APAC) region held the major share in 2019, and it is expected to retain its dominance in the coming years as well. This is attributed to the constant technological advancements in the emerging economies of APAC such as India, South Korea, China, and Japan.

Besides the aforementioned factor, the expanding consumer electronics industry and the burgeoning demand for electronic products such as wearable devices, laptops, tablets, and smartphones, are also supporting the market growth in this region. 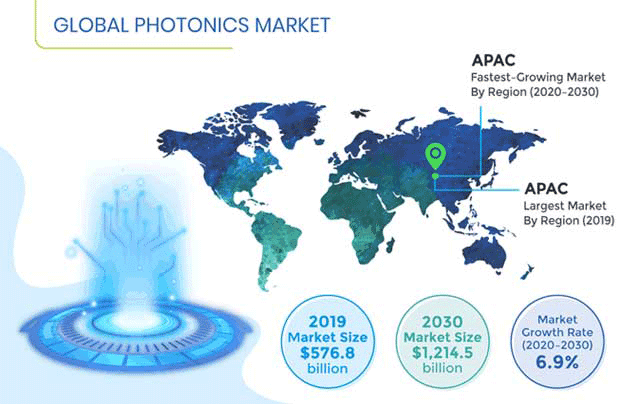 Additionally, the usage of traditional copper cables causes a sharp reduction in the volume of data transmission, as the data transmitted using these cables have bandwidth limitations. This is positively impacting the growth of the photonics market. Thus, the integration of silicon photonics with Complementary Metal-Oxide Semiconductor (CMOS) solutions offers a high-speed interconnect, which, in turn, allows the data centers to attain next-generation performance.

The market is being driven by the surging demand for energy-efficient products. Energy efficiency has become a key parameter in the development of high-performance computing systems because energy-efficient products reduce the consumption of fossil fuels at power plants and operate efficiently for long hours at low maintenance costs. Several governments across the world are initiating renewable energy programs for reducing greenhouse gas (GHG) emissions from the industrial, buildings, and transport sectors.

To adhere to the government norms, numerous companies are developing energy-efficient products, such as lasers, light-emitting diode (LED), organic light-emitting diode (OLED), and displays, that consume less energy for their operations. Companies such as NeoPhotonics Corporation, Hamamatsu Photonics KK, and Osram Licht AG are developing such products for complying with the government standards. Thus, the increasing support of the government to produce environment-friendly products will add to the revenue of the market for photonics, in the coming years. 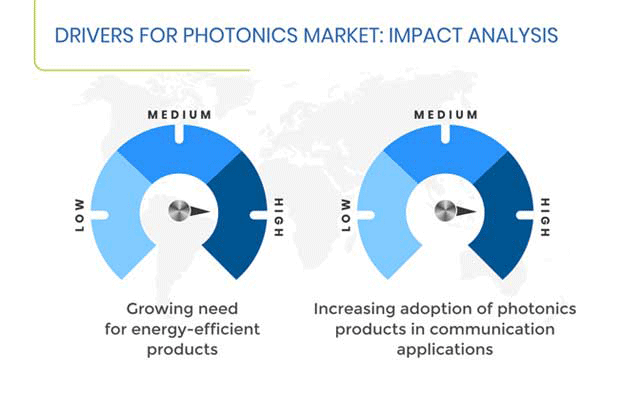 The lighting category, under the application segment, will exhibit the fastest growth in the photonics market in the coming years. This will be due to the escalating requirement for lighting solutions in various general lighting applications, such as agricultural lighting, retail lighting, and entertainment lighting. Besides, the flourishing construction sector around the world is also propelling the growth of the category globally.

The industrial category, within the end user segment of the market for photonics, generated the highest revenue in the past, and it is expected to retain its dominance in the future as well. This is ascribed to the large-scale usage of photonics products, such as lasers, in various industries such as oil & gas and automobile. Manufacturing plants use lasers for cutting, welding, drilling, laser marketing, and various other application purposes.

Globally, the Asia-Pacific (APAC) region generated the highest revenue in the market during 2014–2019, and it is predicted to be the fastest-growing regional market between 2020 and 2030. This region is the world’s largest market for consumer electronics in the world, with demand emerging mainly from countries such as India, China, Thailand, Japan, Indonesia, and South Korea.

Among the APAC nations, the photonics market is predicted to demonstrate the fastest growth in India in the coming years. This will be on account of ‘Make in India’, a flagship program of the government of India. This initiative is attracting numerous foreign automakers and consumer electronic companies to establish their manufacturing units in the country. Moreover, the growing photovoltaic (PV) industry is also fueling the market growth in the country.

Photonics technology is extensively used in the production of solar cells and solar modules, which are equipped with an entire solar panel. The dipping costs of PV panels and the increasing enactment of government initiatives are supporting PV industry growth in the country. For instance, the Government of India allows 100% foreign direct investment (FDI) under the automatic route for non-conventional power generation. 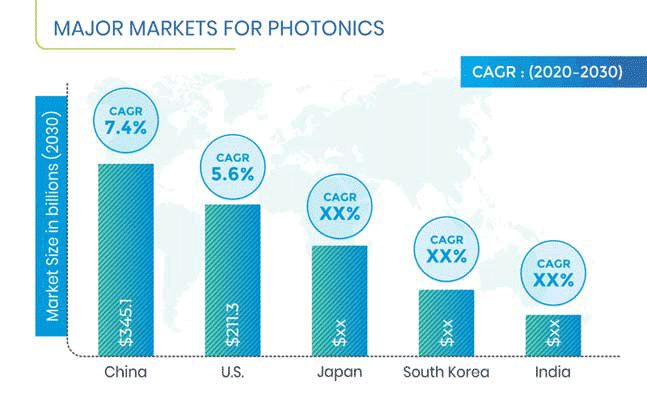 The photonics market is highly fragmented in nature, characterized by the presence of a large number of global and regional players. Major players in the market include Coherent Inc., IPG Photonics Corporation, Hamamatsu Photonics KK, II-VI Incorporated, and NeoPhotonics Corporation. Companies are focusing on expanding the manufacturing facilities in order to meet the growing customers’ demand for opto-semiconductor. For instance, Hamamatsu Photonics KK announced to construct a new building at the Shingai Factory (Shingai-cho, Minami-ku, Hamamatsu City, Japan). Some of the other players operating in the photonics market are Signify N.V., Lumentum Holdings Inc., Infinera Corporation, NEC Corporation, and Innolume GmbH.

The photonics market report offers comprehensive market segmentation analysis along with market estimation for the period 2014–2030.