The global photoacoustic imaging market size was $39.8 million in 2019, which is projected to reach $279.3 million by 2030, growing at a CAGR of 20.3% during the forecast period (2020–2030). The rising number of cancer cases and increasing adoption of advanced treatments across the globe are the prime factors spurring the growth of the market. The mounting healthcare expenditure and surging geriatric population are some other factors driving the demand for photoacoustic imaging systems.

Due to COVID-19, the market witnessed a negative impact across the globe during the first two quarters of 2020, primarily due to the lockdown and non-operational hospitals and research centers in several countries. The lockdown led to the reduced deployment of photoacoustic imaging systems, as a consequence of the reduced demand, postponed pre-clinical and clinical research projects, and widespread financial distress. 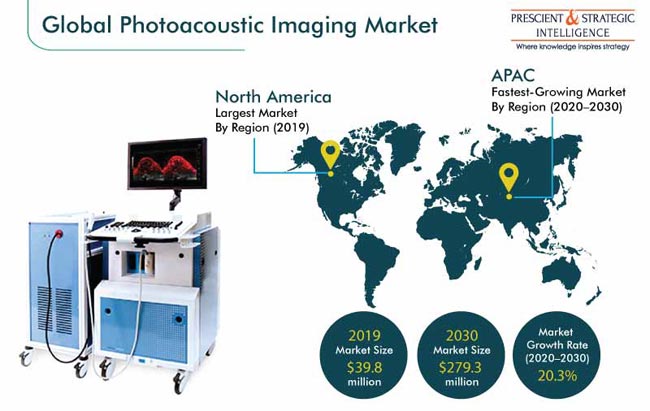 In 2019, the pre-clinical bifurcation held the larger share in the market for photoacoustic imaging, on the basis of application. The market dominance of this category is primarily due to the technological advancements in the field of photoacoustic imaging, coupled with the increasing demand for non-invasive imaging techniques for small animals that are used in pre-clinical studies, and rising number of initiatives by public and private organizations to support pre-clinical research.

Oncology Expected To Be Fastest-Growing Category during 2020–2030

The market is expected to witness the fastest growth in the oncology category, on the basis of indication, during the forecast period. This can be mainly attributed to the increasing usage of photoacoustic imaging systems for cancer diagnosis, mainly breast cancer. Photoacoustic imaging plays a significant role in breast screening, diagnosis, and staging and monitoring of therapeutic interventions. Globally, breast cancer is the most-common cancer in women, with over 2.08 million cases in 2018. Therefore, the oncology category is expected to dominate the market throughout the forecast period.

North America held the largest share in the market for photoacoustic imaging in 2019. This growth can be primarily attributed to the increasing incidence of chronic diseases, rising geriatric population, and surging healthcare expenditure. For Instance, according to the United Nations (UN)’s World Population Ageing 2019 report, in North America, there were 59.9 million people aged 65 years and above in 2019, and this number is projected to rise to 80.2 million by 2030. Thus, the large elderly population in North America leads to a high demand for photoacoustic imaging studies, which boosts the market growth.

APAC is the fastest-growing region in the photoacoustic imaging market, and this can be attributed to the widespread burden of cancer, rising healthcare expenditure, and increasing investments by public and private organizations. For instance, according to the data published in the Global Cancer Observatory (GLOBOCAN), 883,395 cancer cases were reported in Japan in 2018, and this number is expected to increase to 3.5 million by 2025. 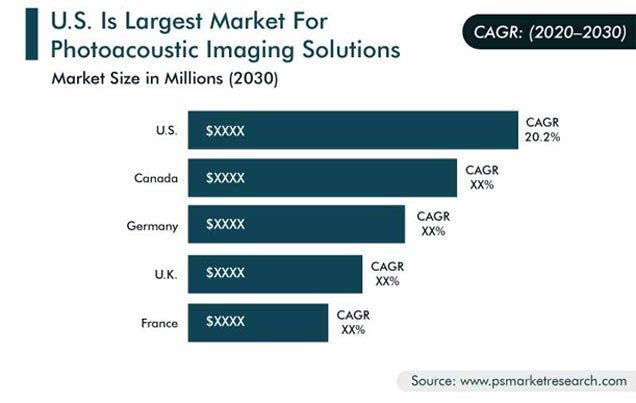 Companies are getting involved in acquisitions and mergers in order to gain a competitive edge in the market. For instance, in 2018, CYBERDYNE INC. acquired the photoacoustic imaging business of PreXionCorporation, a subsidiary of Funai Kosan Co. Ltd. The objective of this acquisition was for CYBERDYNE INC. to increase its product offerings and expand its customer base. Therefore. the increased the focus of players on merging with and acquiring other companies to increase their product offerings and expand across the globe is reducing the complexity and increasing profit. The consolidation trends in the market are likely to accelerate during the forecast period. 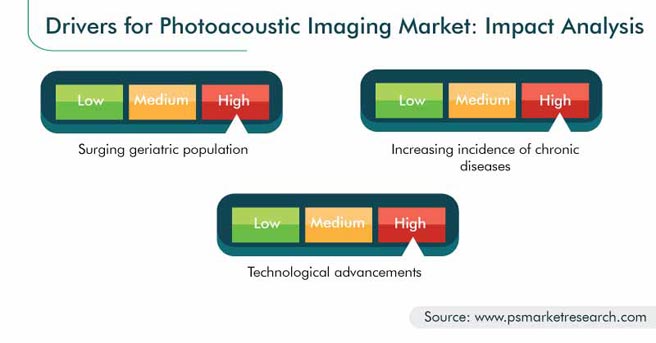 The increasing life expectancy leading to the falling death rate is the major contributor to the growth in the geriatric population. According to the World Population Ageing 2019 report published by the UN, the population of people aged 65 years and above is expected to increase sharply from 703 million in 2019 to 1.5 billion by 2050. The elderly requires extensive care, as they are more prone to illnesses owing to their low immunity level and longer recovery time. Thus, the geriatric population significantly contributes to the growth of the photoacoustic imaging market.

Cancer has become one of the leading causes of death worldwide, accounting for an estimated 9.6 million deaths in 2018, as per GLOBOCAN. Furthermore, according the World Health Organization (WHO), cardiovascular diseases (CVDs) are the number 1 cause of death globally, taking an estimated 17.9 million lives, every year. In addition, in the U.S., according to the Centers for Disease Control and Prevention (CDC), coronary heart disease is the most-common heart disease, killing 365,914 people in 2017. High blood pressure is a major risk factor for coronary heart disease and ischemic as well as hemorrhagic stroke. Thus, the increasing incidence of chronic diseases boosts the photoacoustic imaging market growth.

In recent years, players in the photoacoustic imaging industry have launched a number of advanced products in order to stay ahead of their competitors. For instance:

The report offers comprehensive market segmentation analysis along with market estimation for the period 2014–2030.

Frequently Asked Questions About This Report
What will be the growth rate of the photoacoustic imaging market during 2020–2030?+

What are the segments of the photoacoustic imaging industry report?+

The segments of the photoacoustic imaging industry report include product, indication, application, and region.

Which product has been in the higher demand in the photoacoustic imaging market?+

Imaging systems have been in the higher demand in the photoacoustic imaging market.

Which region holds the highest potential for the photoacoustic imaging market growth?+

What are photoacoustic imaging market players doing for a competitive edge?+

Players in the photoacoustic imaging market are launching new products for a competitive edge.