The increasing demand for this chemical for producing phosphate composts is the primary driving factor for the growth of the sector, which is directly related to the population boom around the world.

Farmers are attempting to raise the agricultural production per unit area, taking into consideration the rapidly rising global population. As a result, the phosphoric acid demand will increase rapidly owing to the surging compost consumption. In this regard, the fertilizer subsidies and a lack of arable land in developing nations will fuel the industry expansion.

The market is divided, based on end use, into fertilizers, feed and food additives, detergents, and others, including water treatment chemicals and metal treatment products. Due to its usage in the manufacturing of fertilizers, including diammonium hydrogen phosphate (DAP), triple superphosphate (TSP), and monoammonium dihydrogen phosphate (MAP), the fertilizers category is the largest in this segment. The increasing focus on producing more crops more efficiently, while conforming to the food safety guidelines, also drives the consumption of this chemical. 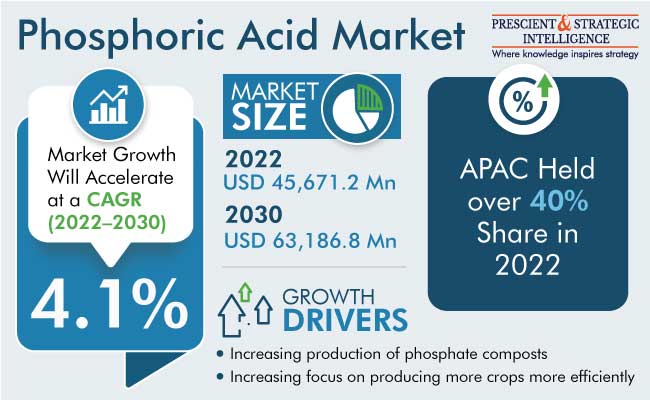 In the coming years, the industry growth will also be stimulated by the burgeoning usage of phosphoric acid as an acidity regulator and flavoring ingredient in the food and beverage sector. It is essential in the process of treating water because it lessens the corrosion of the pipework, prevents the buildup of limescale, and regulates the pH of both water and liquor.

The COVID-19 pandemic has had a significant negative impact on the industry growth, on account of the interrupted supply chains and lower production of phosphorus-based agrochemical products.

It is predicted that the worldwide diammonium hydrogen phosphate market would see significant growth between 2022 and 2030, with CAGR of around 5%, owing to the increasing need for manure to boost agricultural yields.

The growing urbanization rate is propelling food consumption, thereby driving the need for fertilizers and thus, the DAP industry. According to the FAO’s projections, cities will house about 70% of the global population by 2050, as a result of which the annual cereal production will need to increase drastically.

Therefore, Asia-Pacific will emerge as the booster for the diammonium hydrogen phosphate demand, due to the growing agriculture sector in China and India, as well as the availability of vast tracts of arable land. According to reports, India's total agricultural land area was around 156 million hectares in 2019, making it the second-largest country in the world, behind the U.S., in this aspect.

Moreover, the rapid growth in the consumption of monoammonium phosphate is attributed to the presence of nitrogen and phosphorus in it, which are the key nutrients in fertilizers. Due to the property of water solubility, it mixes well in moist soil, which allows the fertilizer to be applied under the soil’s surface, directly at the roots of plants, to attain the highest possible plant growth efficiency. Apart from fertilizers, MAP is also contained in fire extinguishers, which are widely used as a fire safety protocol. 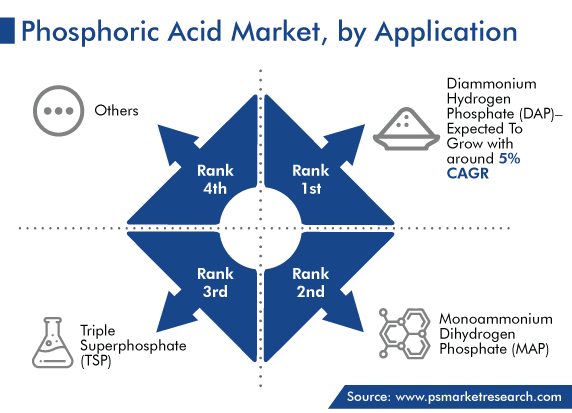 Agricultural-grade phosphoric acid held around 60% share in 2022, thus dominating the grade segment. The agricultural output in China continues to grow, backed by economic progress, which leads to a surge in the demand for phosphate fertilizers.

To the south, in India, both the production and consumption of the chemical are expected to grow significantly, driven by the rise in agricultural activities within the nation and the growth in the export of fertilizers.

The increasing interest of farmers in phosphate composts, which are beneficial for plant growth, drives the demand for phosphoric-acid-based agrochemicals. The food demand is increasing at an unprecedented rate in the country, which would mandate massively improved yields, thus propelling the utilization of phosphate compounds in composts. 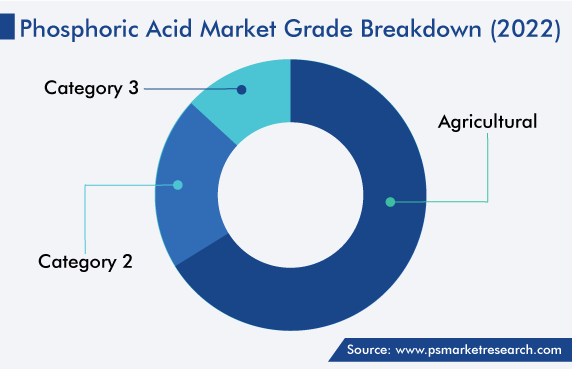 The Asia-Pacific region dominated the market globally, with a share of more than 40%, in 2022.

The region is also expected to witness the fastest growth in the market and see a marked increase in the local production of the chemical over the forecast period. In the predominantly agrarian economies, the need for higher crop yields will escalate the demand for fertilizers created from phosphoric acid. Therefore, China and India are expected to lead the production of phosphoric acid owing to their massive populations, which continue to rise.

Moreover, owing to the large phosphate rock reserves, the region is set to retain its dominance throughout the forecast years. Moreover, fueled by its rapid economic growth, rise in the demand for phosphate composts, and high-volume production of yellow phosphorus and phosphate fertilizers, China is the world’s leading producer and consumer of phosphoric acid.

On the other hand, while phosphoric acid requirements in Europe are fairly mature, the production capacity has significantly expanded in regional countries, primarily for export to India, one of the leading importers of this chemical. Moreover, India and China are the leading countries in the APAC region, with China being the largest market for this compound, with a share of approximately 50% in 2022.

The study uncovers the biggest trends and opportunities in the phosphoric acid market, along with offering segmentation analysis at the granular level for the period 2017 to 2030.

Frequently Asked Questions About This Report
How much is the phosphoric acid market worth?+

What is the phosphoric acid industry growth potential?+

Which region has the largest share in the phosphoric acid market?+

The market for phosphoric acid is dominated by APAC.

DAP will have the highest CAGR in the phosphoric acid industry.

Which grade witnesses the highest sale in the phosphoric acid market?+

The market for phosphoric acid witnesses the highest sale of the agricultural grade.