The Philippines diesel generator set market size stood at $152.9 million in 2021, which is expected to reach $245.2 million by 2030, at a CAGR of 5.4% during 2021–2030. This will mainly be due to the growing industrial and construction sectors, which are pushing up the demand for electricity.

For instance, in 2021 The Marawi Rehabilitation and Development project involved the rehabilitation and development along the Marawi Trans Central Road in Mindanao, with an investment of $122 million. This project comprised the construction, rehabilitation, and improvement of 176.6km of roads, linking of the Bangsamoro Autonomous Region in Muslim Mindanao to the trade centers of Mindanao. 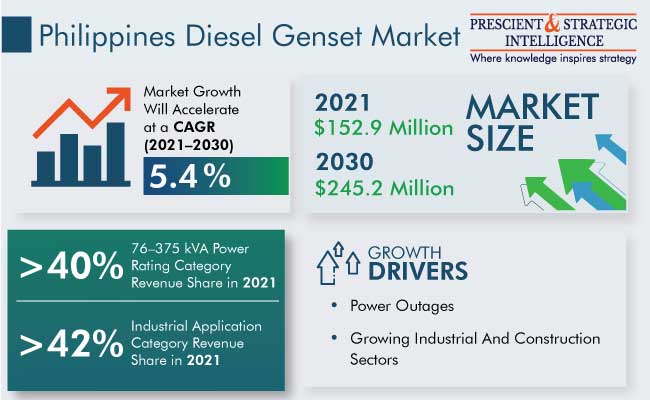 The Philippines diesel generator set market has a bright future ahead, with both the production and demand predicted to increase over the next ten years. Government initiatives for the promotion of the telecom sector and the frequent power outages in the country are helping the Philippines DG set market grow. For instance, Globe Telecom, a provider of telecommunication services in the Philippines, has expanded its 5G network. Moreover, it has completed the site upgradation of its 3G legacy network to 4G LTE in the key cities on the Visayas and Mindanao islands, while also expanding its 5G coverage in these areas.

With the help of government initiatives, it has deployed 5G services in 30 key locations across these cities. Additionally, Smart Communications (the mobile arm of Filipino Telco PLDT Inc.) has teamed up with South Korea’s Samsung Electronics to accelerate the deployment of 5G standalone (5G SA) technology in the Philippines. Since DG sets are essential for providing non-stop electricity at telecom towers, such initiatives are giving a push to the sale of these systems.

In 2021, in terms of sales volume, the largest share in the market was held by the 76–375 kVA category, of more than 40%. This is mainly attributed to the high demand for these variants in small industries, telecom towers, restaurants, commercial complexes, and hotels. 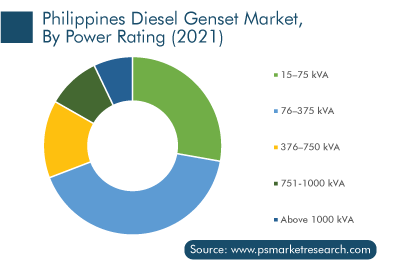 Furthermore, construction projects for residential units account for a significant share in the net volume demand for these gensets in this Western Pacific nation. These diesel generators are widely deployed in housing projects to serve prime and auxiliary power requirements. For instance, the units at Basecommunity in Manila’s in-city horizontal public housing project in Baseco, Port Area, began to be leased out in July 2021. The project involved the construction of 229 two-story, 42-square-meter housing units, each with two bedrooms, a dining room, a kitchen, a bathroom, and a living room. These 229 units have been leased out to families that were affected by the fire that broke out in the area in February 2020.

In 2021, industrial gensets contributed more than 40% revenue share in the application segment. This is attributed to the various industrial projects taken up by the government. For instance, in August 2021, DMCI Holdings announced plans to invest $70 million (PHP 3.5 billion) to develop two electricity plants. Of this, $54.8 million (PHP 2.7 billion) was invested in a thermal power plant project on Palawan Island, and the rest in a hybrid diesel–solar power plant in Cataingan, Masbate. Once operational, the cost of electricity for residents will reduce, and the total power production capacity of DMCI will rise to 164 MW. 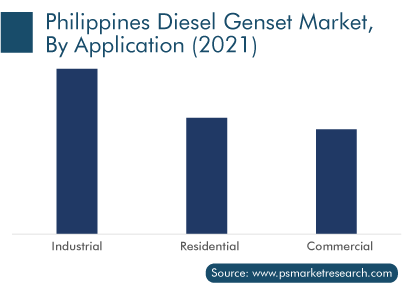 Market Players Are Introducing New Products and Involving in Acquisitions

The major trend being observed in the market is of the major companies involving in product launches and acquisitions in order to stay ahead of their competitors. For instance:

Frequently Asked Questions About This Report
What will be the 2030 size of the Philippines diesel genset market?+

The highest revenue to the Philippines diesel genset industry is contributed by industrial applications.

Why is the Philippines diesel genset market growing?+

The diesel genset market in the Philippines is growing because of the rampant urbanization and industrialization and high frequency of power cuts, many of which are due to natural disasters.

What are the major Philippines diesel genset market players doing for growth?+

Key players in the diesel genset market of the Philippines are launching newer generators to suit industrial, commercial, and residential requirements.