The global particle therapy market size stood at $797.1 million in 2021, which is expected to reach $1,634.4 million by 2030, propelling at a CAGR of 8.3% during 2021–2030. This is mainly ascribed to the high adoption of particle therapy for cancer treatment coupled with the surge in the number of particle therapy centers all over the world.

Moreover, the active involvement of companies to launch particle therapy products also drives the market. For instance, in May 2020, Hitachi Ltd. introduced an advanced proton therapy system in Clinica Universidad de Navarra hospital in Spain. The system is equipped with spot scanning technology having a 360-degree rotating gantry treatment room that effectively delivers the proton beam at the target site. 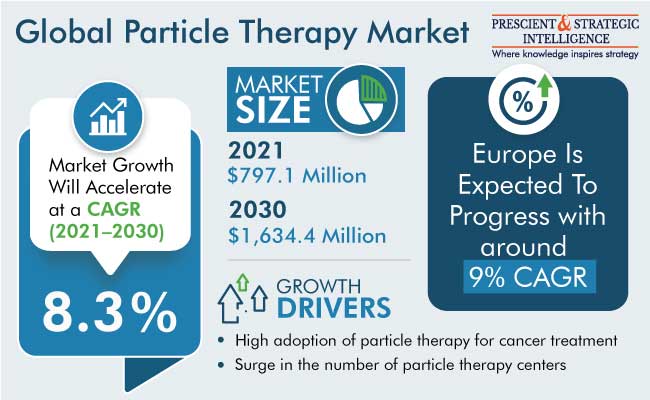 Proton Therapy Being the Most Used Type for Cancer Treatment

Proton therapy accounted for more than 90% share in 2021, and the category is projected to witness a higher CAGR, of approximately 8.5%, in the forecast period. This is ascribed to the high adoption of this therapy for treating various cancers, such as pediatric cancer, brain tumor, and breast cancer. As per a government agency, more than 2 million women were diagnosed with breast cancer in 2020 all over the world, making it the most widespread cancer.

Nowadays, proton therapy is employed during all stages of breast cancer treatment, owing to several benefits, such as effective depth-dose distribution and high linear energy distribution (LET) of charged particles, which lead to the formation of DNA lesions, in such a way that it is very difficult for them to repair.

Moreover, the total health spending for the treatment of pediatric cancer through the use of proton therapy is less in comparison to radiation therapy. As per a government organization, the average life-span savings per pediatric patient with proton therapy is more than ~$15,000, thereby fueling the particle therapy market growth in this category.

Products, such as cyclotrons, synchrotrons, and synchrocyclotrons, hold more than 80% of the market share, owing to the rising adoption of cyclotrons in various hospitals coupled with various advantages offered by them such as low cost. In addition, the rising inclination toward nuclear scans for diagnosis, and the accessibility of technologically advanced diagnostic devices also drive the market growth in this category.

Particle Therapy Is Highly Used for the Treatment of Pediatric Cancer

Pediatric cancer accounted for more than 25% of revenue share in 2021, and the category is projected to record the fastest growth, advancing at a CAGR of around 9.0%, in the forecast period, owing to its high prevalence across the world. Particle therapy is mostly employed in the treatment of pediatric patients due to the high mitosis rate in children, which requires therapy that directly targets the tumor with very few long-term side effects. It provides high precision and radiation control with almost no exposure to normal body cells. For instance, as per a government organization, more than 400,000 cases of pediatric cancers such as brain cancer, leukemia, solid tumor, and lymphomas are witnessed every year, globally. 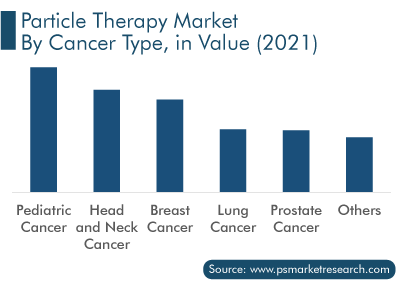 The European particle therapy market accounted for the highest revenue in 2021. Additionally, the regional market is expected to register the highest CAGR, of around 9%, in the forecast period, due to the rising number of particle therapy facilities providing clinical operations in the region. For instance, more than 50% of the particle therapy centers are present in Europe, globally. This is because of the favorable government policies and the presence of technologically advanced solutions for disease diagnosis. In addition, the presence of a large number of distribution channels also drives the market growth in the region.

Germany, the U.K., and Spain together hold more than 70% share of the European market. This is attributed to the rising number of cancer cases and the presence of prominent players in these countries. For instance, as per a government source, there were around 700,000 incidents of cancer in Germany in 2020.

North America held the second-largest market share, of around 30%, in 2021, owing to the early adoption of particle therapy treatment coupled with the presence of a large number of hospitals and research institutes in the region. According to the National Association for Proton Therapy, out of 170,000 patients treated with proton therapy globally, more than 70,000 of them were treated in the U.S. alone, in 2021. Also, currently, there are around 41 proton therapy centers in North America, which are intensifying the regional market growth. 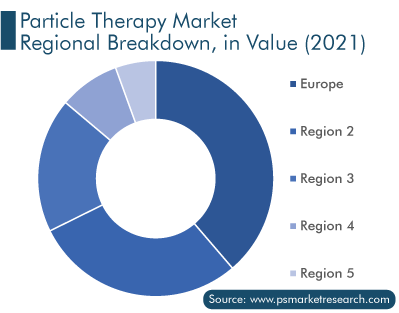 In recent years, players in the market have been involved in product launches and partnerships, in order to attain a significant position. For instance, in March 2022, IBA Worldwide and Tractebel Group announced their partnership to support the proton therapy business of the former.

Key Players in the Particle Therapy Market Are:

Based on Product & Service

Based on Cancer Type

Frequently Asked Questions About This Report
What was the size of the particle therapy market in 2021?+

What will be the growth rate of the particle therapy market?+

Which is a larger end user of particle therapy?+

What are the major drivers for the particle therapy market?+