The global nitro-infused beverages market size stood at around $69.17 million in 2021, and it will grow at a CAGR of 20.3% during 2021–2030, to reach $366.07 million by 2030. The key reasons boosting the demand for nitro-infused beverages include the changing consumer preference, increasing demand for newly launched products, and surging disposable income of people. Moreover, customers are ready to pay extra for superior flavored and textured products. As a result, the rising customer choice for these products is driving the need for nitro-infused drinks.

In 2021, North America generated the highest revenue in the market, followed by Europe, and the regional market is also expected to witness rapid growth in the coming years. This is due to the presence of top industry players in the region and companies are investing in R&D operations and launching new products to obtain a competitive advantage over their competitors.

However, APAC is the fastest-growing market for nitro-infused drinks. Although the regional sector is still in its initial stage, the region has enormous development potential. Companies operating in the market have started increasing their presence in the region by capitalizing on this potential. For instance, Starbucks and McDonald's Corporation, both located in the U.S., have begun providing nitro-infused beverages in APAC, which is predicted to increase the sales of these products in the region. 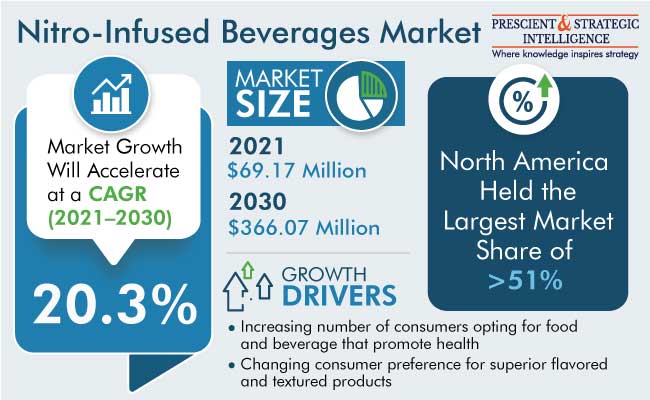 The coffee category held the largest market share in 2021, and it is expected to increase at a considerable CAGR of 20.7% between 2021 and 2030, depending on product type. Nitrogen gas gives the drink a creamy, thick texture, and it also generates a thick frothy head like a beer. Moreover, nitrogen gas decreases acidity and some bitterness in coffee, making it more appealing to non-coffee drinkers. Thus, these factors drive the market growth in this category.

However, the demand for nitro-based soft drinks is predicted to rise at the highest growth rate, of 20.9%, during the forecast period. This can be ascribed to the increasing consumption of soft drinks in both developed and developing nations, the expanding demand for cold brew, and the rising consumer buying power throughout the globe. Furthermore, the growing popularity of nitro-infused beverages among millennials worldwide is expected to drive the development and expansion of the industry. Thus, firms are releasing new nitro soft drinks with distinct flavors and textures to broaden their product line.

Moreover, in the field of mixology, the use of nitrogen is continuously increasing. Nitrogen, when infused in beverages, improves not only the consistency but also the aromatics of the beverage. Nitrogen gas is an alternative to typical carbon dioxide, which gives soft drinks their fizz and offers various advantages, particularly for individuals who suffer from IBS, bloating, or heartburn. 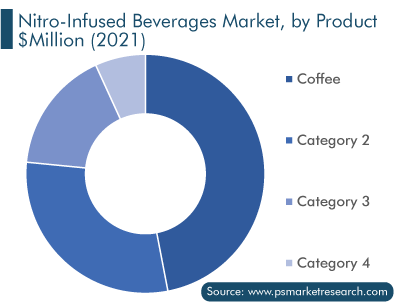 Supermarkets/hypermarkets lead the nitro-infused beverages market, based on distribution channel, followed by convenience stores. In 2021, the total revenue generated by this channel was around $34.97 million. All nitro-infused beverages, including coffee, tea, and soft drinks, are available in canned form at supermarkets. When compared to local marketplaces, supermarkets have made shopping considerably easier and more comfortable. With the rising consumer purchasing power, the number of people shopping in supermarkets is increasing.

However, due to the rising availability and usage of the internet and the widespread use of online channels to purchase nitro-infused drinks, the online stores category is expected to grow at the highest CAGR, of 20.7%, from 2021 to 2030. During the lockdown period in 2020 and 2021, key e-commerce sites such as Amazon, Target, and Walmart were the main distributors of the merchandise. 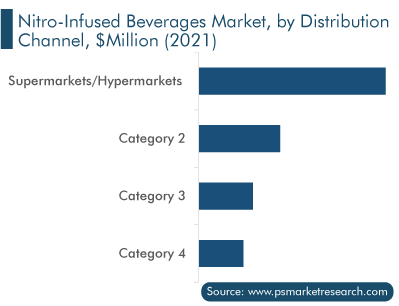 Ready-to-drink beverages are gaining appeal in all regions, particularly in North America and Europe, and among ever-expanding demographics. Low alcohol by volume (ABV) and low-calorie offerings, rise in demand for canned beverages, a greater emphasis on natural ingredients and sophisticated flavors, and social media-friendly brand identities have all helped ready-to-drink beverages fit into customers' increasingly health-conscious diets.

In addition, the packaging of the drinks is characterized by bright colors, eye-catching pictures, simplistic design, and thin cans. These make canned ready-to-drink beverages more accessible while also making them appear more premium than normal coffee or tea items. Further, canned and bottled packaging allows purchasers to drink with minimum bother at festivals or at the beach, which means that if the producers get the packaging design right, consumers are more likely to picture them in brand-aligned and aspirational circumstances. This increases their brand value.

Moreover, in order to establish supremacy in the market, companies have chosen strategies such as innovative product launches and collaborations. Marketing tactics will help companies comprehend revenue-generating techniques employed by participants in the nitro-infused beverages market. La Colombe Coffee Roasters, for instance, teamed with Whole Foods in January 2021 to offer their goods in two locations: Pearl Street Whole Foods in Boulder and Union Station Whole Foods in Denver. La Colombe Coffee Roasters hopes to increase its presence through this collaboration.

Germany held the largest revenue share, of 33.3%, in the European market in 2021. This is because coffee is the most popular nitro-infused beverage in the country. Changing customer lifestyles and their requirements are also expected to boost the market in Germany. In addition to this, the growing population, the increasing purchasing power, and state-of-the-art infrastructure for high productivity in the country are also driving the demand for nitro-infused beverages.

Moreover, France contributes a significant revenue share to the European market. The key factors driving demand for nitro-infused beverages in the country include the rising disposable income and changing customer preferences and lifestyles.

Top Players in the Nitro-Infused Beverages Market Are:

Frequently Asked Questions About This Report
What was the size of the nitro-infused beverages market in 2021?+

What will be the growth rate of the nitro-infused beverages market during the forecast period?+

Which is the largest product type in the nitro-infused beverages market?+

Coffee is the largest product type in the nitro-infused beverages market.

What are the major drivers for the nitro-infused beverages market?+

The major drivers of the nitro-infused beverages market include the increasing number of consumers opting for food and beverage products that not only taste great but also promote health, the changing consumer preference for superior flavored and textured products, and the surging disposable income of people.