Across the globe, the market will demonstrate the fastest growth in the Asia-Pacific (APAC) region in the coming years. This is primarily credited to the soaring requirement for motion sensors in India, Japan, Indonesia, South Korea, and China because of the surging manufacturing of tablets, smartphones, lighting systems, gaming consoles, electronic medical devices, and building automation equipment, itself due to the rapid urbanization and increasing purchasing power of residents. 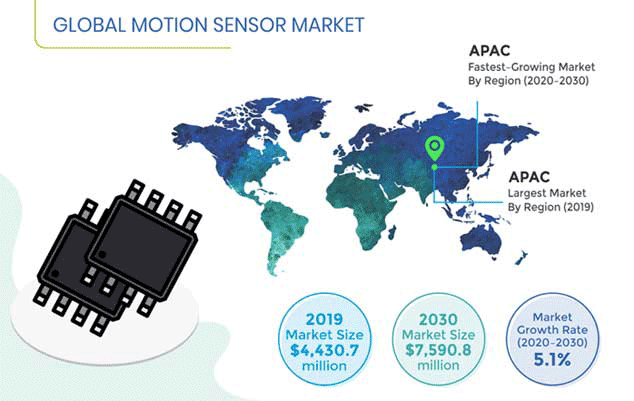 One of the major trends currently being witnessed in the industry is the production of microelectromechanical system (MEMS)-based motion sensors. MEMS, manufactured on a silicon wafer, offer economies of scale, as thousands of sensors can be manufactured in a single batch process. The most-widely used types of MEMS-based motion sensors are magnetometers, gyroscopes, and accelerometers, which find wide application in smart wearable devices, medical equipment, and smartphones. While people’s rising disposable income is fueling the demand for smartphones, the growing geriatric population and chronic disease burden are driving the requirement for medical equipment, including wearable trackers.

The increasing usage of internet of things (IoT) devices is a major opportunity for the players in the market for motion sensors. The IEEE estimated the total number of IoT devices in use around the world in 2017 at 27 billion. The institute further expects this number to rise to 125 billion by 2030. With the incorporation of IoT capabilities, motion sensors can monitor the physical status of a device from a remote location. Furthermore, these devices have the ability to improve various building automation applications, such as heating, ventilation, and air conditioning (HVAC) controls and lighting systems, thereby helping save energy and drive down emissions.

In 2019, the passive category contributed the higher revenue to the motion sensor market, under the technology segment. This category is also predicted to demonstrate the faster growth in the forthcoming years owing to the surging requirement for MEMS and passive infrared (PIR) motion sensors. Passive MEMS motion sensors are mainly used in medical devices, industrial machinery, and consumer electronics, the demand for all of which continues to burgeon with the rising population and its increasing purchasing power.

Combo-Type Sensors Are Most Popular due to Their Higher Accuracy

In 2019, the type segment of the market was dominated by the combo sensor category, in terms of revenue. This is ascribed to the microfabrication of several types of motion sensors into a single device, which provides higher accuracy in detecting motion. Combo sensors are used in consumer electronic devices, such as smartphones, where the gyroscope, magnetometer, and accelerometer are integrated into a single MEMS system.

The building automation category is predicted to demonstrate the highest growth rate under the application segment of the market in the upcoming years. This is attributed to the growing requirement for green buildings on account of the increasing concerns over global warming. In this regard, the building automation technology is required for using power efficiently and reducing the carbon footprint, thereby propelling the expansion of this motion sensor market category. Furthermore, motion sensors are deployed as occupancy sensors, wherein they carry out dedicated functions, such as the on/off function of HVAC systems and lighting. This saves manual effort and drives down the consumption of electricity, which has become necessary to reduce the emission of greenhouse gases.

Geographically, Asia-Pacific (APAC) is the largest procurer of these instruments, and it will also experience the fastest growth in the motion sensor market during the forecast period. This is credited to the fact that this region is the biggest consumer electronics market in the world, led by India, Thailand, Indonesia, South Korea, Japan, and China.

In APAC, the industry is predicted to demonstrate the fastest growth in India because of the progress of the country’s electronics industry. As per the India Electronics and Semiconductor Association (IESA) and Invest India, the country’s electronics industry will attain a value of $400 billion by 2025. Furthermore, the increasing number of commercial projects, particularly offices and residential buildings, and upcoming sports events are predicted to push up the demand for building automation. Motion sensor market players will seek to leverage this opportunity to increase their sales revenue and enhance their position in the industry. 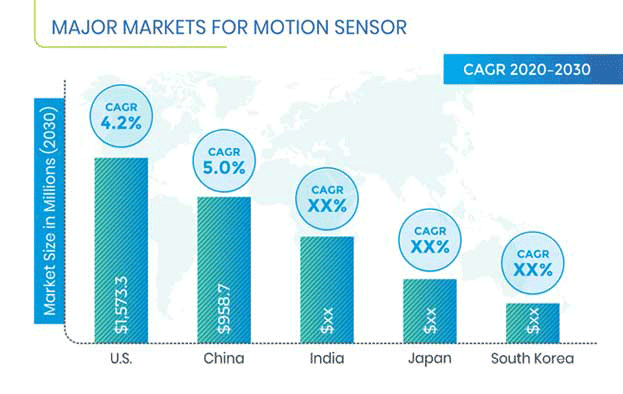 Changing market dynamics due to factors such as growing demand for autonomous and electric vehicles, security and surveillance systems, building automation, medical devices, and others, is projected to drive the market in the coming years. This is projected to intensify the competition among the market players during the forecast period.