The global motion control market size was $14,887.5 million in 2021 and it is expected to advance at a CAGR of 5.1% during 2021–2030, to reach $23,286.4 million by 2030. The major factors credited for the growth of the market include the increasing demand for industrial robots and the integration of components with motion control systems, for ease of use.

Additionally, the evolving motion control standards and protocols are boosting the market. For instance, OPC UA TSN is a protocol for controlling entire systems, whereas message queuing telemetry transport (MQTT) is a more-lightweight protocol related to the communication between two applications. MQTT is typically applied in one product. It, for example, enables a sensor or a drive to extract data from a device and send it to the cloud. 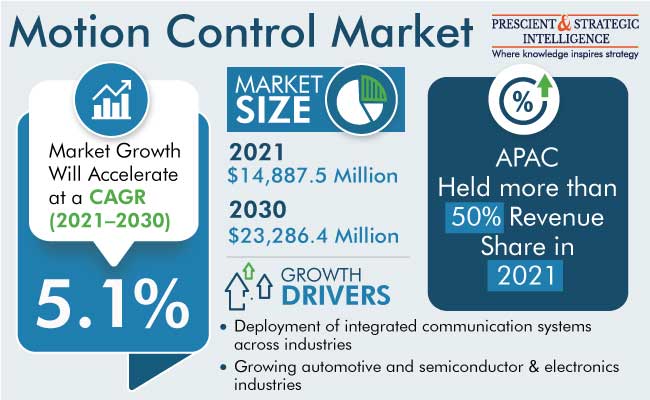 The largest proportion of the motion control systems is held by general variants, and they are also expected to witness the higher sales growth rate during the forecast period, compared to CNC motion control systems. The growth of the GMC category is attributed to the wide applications of GMC servo motors and servo drives across industries, majorly semiconductor and electronics and food and beverages.

The motor is one of the major components in motion control systems, which is why it accounted for an approximately 40% market share in 2021 owing to the rising inclination of manufacturers toward more-energy-efficient motors, for reducing their operational costs and environmental footprint.

Drives are expected to witness significant growth during the forecast period, at a CAGR of around 5.0%, as they allow for the regulation of the speed of electric motors and, thus, used everywhere a motor is required. Moreover, drives allow for more-thorough and -precise motor control, which increases factory production.

Closed-loop systems are widely used across industries, which is why they are expected to maintain their dominance during the forecast period. This growth is attribute to the functional advantages of closed-loop systems over open-loop systems, such as no requirement for human intervention, as they are fully automated.

The automotive industry generated more than 20% market revenue in 2021, and it is expected to maintain its dominance during the forecast period, driven largely by the surging adoption of autonomous driving technologies. Therefore, market players are launching motion control solutions that help in self-driving.

The semiconductor & electronics industry is the second-largest end user, and solution demand here is set to rise at the highest CAGR during the forecast period, because of the surging adoption of high-tech motors, drives, and motion controllers. This demand is itself driven by the increasing complexity of the semiconductor and electronics manufacturing process, in turn, because of the rising acceptance of miniature devices and the development of microelectronics. While manufacturing, motion control systems aid in the exact and controlled movement of a load.

The food and beverage industry is another major user of turnkey motion control solutions for manufacturing and processing automation. Robots that utilize motion control are widely utilized for cutting/slicing, cake decorating, packaging, and many other applications in food processing plants. For instance, Motion Control Robotics offers robots for automating packaging and processing systems in the food and beverage industry of the U.S. Its key clients include BlueBell, Smucker’s, Hiland Dairy Foods. 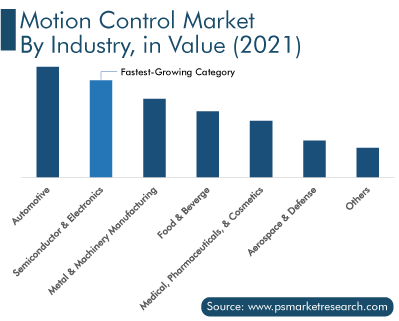 The APAC motion control market is the largest, contributing more than 50% of the global market revenue in 2021, and it is likely to maintain its dominance in the coming years, witnessing the fastest growth. This is attributed to the growing production of machine tools and use of customized robots for diverse applications during the manufacturing of automobiles and smartphones. Additionally, the increasing number of manufacturing plants and streamlining of the machine development process are expected to boost the market growth during the forecast period.

Further, Europe is the second-largest region in the global market, on account of the growing demand for automobiles, medical gadgets, and machinery in the continent. Other growth drivers include the rising awareness of more-precise techniques of motion control and the enhancements in controller capabilities, such as the capacity to govern multiple axes. Moreover, manufacturing companies in the region are increasingly focusing on automation, to boost productivity and quality. The presence of a large number of manufacturing enterprises in the automotive, medical devices, electrical, and other industries is, thus, boosting the market growth.

North America is the third-largest regional market, with the U.S. holding the major share in the region. The increasing demand for industrial robots and other automation systems is the major factor propelling the growth. Moreover, the presence of a large number of motion control system manufacturers in the U.S. is driving the market. 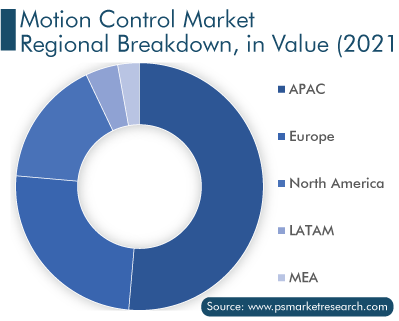 In recent years, major players in the motion control market have been actively involved in mergers and acquisitions, along with launching new products, software, and services. For instance,

The research offers the size of the global motion control market for the period 2017–2030.

Frequently Asked Questions About This Report
Which component category is driving the motion control market?+

Motors are the widest-selling component in the market for motion control solutions.

What is the growth scope of the motion control industry?+

How much is the motion control market worth?+

Who are the potential users in the global motion control industry?+

The biggest end users in the motion control industry are the automotive, food & beverage, and semiconductor & electronics sectors.

Which region will lead the motion control market in the future?+

Throughout this decade, the market for motion control solutions will be led by APAC.