The global micropropagation market size stood at $1,279.4 million in 2022, and it is expected to grow at a CAGR of 9.8% during 2022–2030, to reach $2,711.0 million by 2030. The major factors driving the market include the development of horticulture and advanced crop protection technologies. Micropropagation is primarily utilized for vegetative multiplication of plants under high-intensity light, a specific nutritional medium, and a temperature-controlled environment. The method has been used on a large variety of commercially propagated plant species.

This approach can easily yield large volumes of high-quality plants. Also, this method is used to preserve exceptional, uncommon, and endangered plant species' in-vitro germplasm. It includes the breeding of crops and encapsulated seeds, as well as the study of plant biosynthesis through the cell and root cultures.

The production of such plants using this technique is increasing sharply in the U.S., where tissue culture and orchid micropropagation began at a very early stage. Also, the number of industrial units and factories is rising rapidly, which is contributing to the market growth in the country. 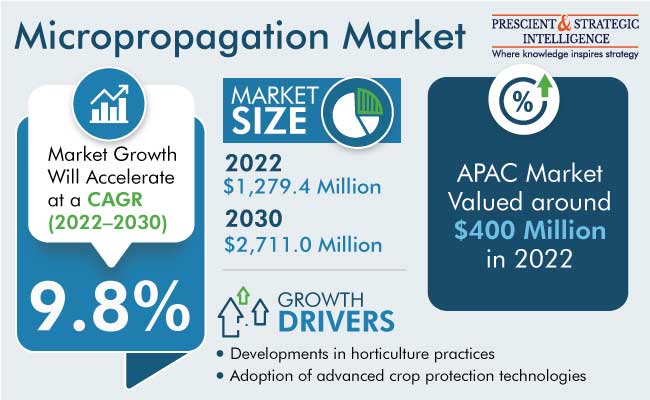 Demand for Orchid and Ornamental Plants To Witness Fastest Growth

The orchid & ornamental category is projected to grow at the highest CAGR, of around 10%, during 2022­–2030, based on crop type. One of the primary reasons driving the need for orchid and ornamental plants is the growing interest of the young population in household plants. Furthermore, customers are increasingly planting orchids and beautiful plants to create an aesthetic and natural environment, influenced by the internet and environmental concerns. Moreover, ornamental plants are widely used for decoration in commercial facilities such as hotels, restaurants, and offices. Also, the trend of interior designing has boosted the demand for these plants.

On the other hand, the banana category held the second-largest revenue share in the market. Micropropagation of banana plants is usually done to increase the yield by five times as compared to traditional farming. Further, this process is becoming popular among farmers in the APAC and MEA regions. 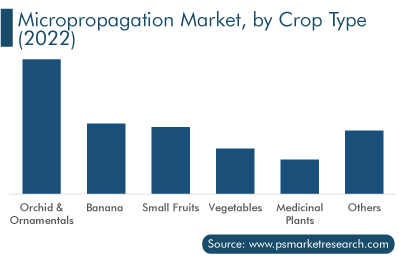 The test tubes & petri dishes category held the largest market share globally in 2022, and it is expected to witness a CAGR of around 10% during the forecast period. This is because they are commonly used in professional and educational science research labs. These containers protect cultures from the external environment. Moreover, these are available in different shapes, which can be disposed of after one use to avoid culture contamination. However, these containers can be reused after sterilization.

The online category is expected to grow at a higher CAGR during the forecast period. This can be because various vendors offer their items through online channels, as these require a low cost of setup as compared to opening physical stores or forming agreements with merchants. The cheap cost of establishing online channels also allows sellers to sell items at a reduced price and obtain a competitive advantage.

Furthermore, internet channels have a greater reach than conventional methods, as they involve digital marketing, which allows sellers to target a large set of potential customers. Also, online sales are projected to alter the industry through additional benefits, which include extended warranty, online customer assistance, lower price, free trials, and on-time and hassle-free delivery. These benefits of online channels are projected to increase the online sales of micropropagation products in the coming years.

Micropropagation provides numerous advantages to small-scale and large-scale farmers involved in plant multiplication, such as crop improvement, uniform growing, and genetic enhancement. Due to these factors, micropropagation and tissue culture methods are gaining popularity among farmers. Also, they use these methods to reduce variances within the same species, resulting in uniform plants that require the same harvesting and care.

Moreover, it helps farmers in underdeveloped countries improve plant genetics and yields, allowing the chance of enhanced exports. For instance, farmers in Africa grow genetically altered rice that grows better in harsher environments and has larger yields. Tissue culture is a popular technology among banana growers, specifically among those who desire to breed disease-free banana plants. Further, farmers who concentrate on exotic or uncommon plants are known to employ tissue culture techniques to maintain healthy plants and generate consistent income.

Furthermore, bananas are widely cultivated in APAC, with India being the region's top producer. For instance, India produced roughly 31.5 million tons of bananas in 2020, accounting for approximately 26% of world banana production.

Moreover, significant changes in consumer food taste fuel the expansion of the horticulture industry in China. Farmers in the country rely on horticulture to cultivate fruits and vegetables, which, in turn, boosts the demand for micropropagation.

Additionally, the Japanese government conducts several horticulture programs, such as the World Horticulture Exhibition in Yokohama, to raise horticulture knowledge. Thus, this factor increases the use of micropropagation among farmers and house gardeners in the country. 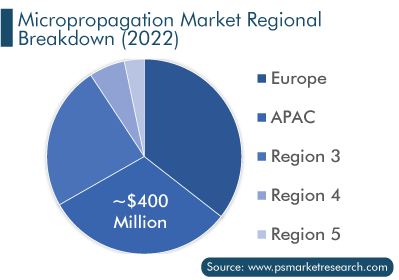 Improving Agricultural Yield Through Micropropagation Is Driving the Market

With the rising demand for agricultural, forestry, plantation, and horticultural crops, both in developing and developed regions, there has been major growth in the need for high-quality, high-yielding, and disease-free planting stock during the last two decades. Micropropagation has evolved as a significant biotechnological and economically feasible method for rapidly multiplying elite kinds of high-quality, disease-free, and high-yielding plants in laboratories, regardless of the season. Micropropagation offers several distinct advantages, which are not possible with conventional propagation techniques. Moreover, the rapid multiplication of genetically uniform plants (clones) that possess desirable traits is driving the market growth.

Top Companies in the Micropropagation Market Are:

Based on Container Type

Frequently Asked Questions About This Report
What was the size of the micropropagation market in 2022?+

What will be the growth rate of the micropropagation market during the forecast period?+

Which is the largest end user in the micropropagation market?+

Farmer is the largest end user in the micropropagation market.

What are the major drivers for the micropropagation market?+

The major drivers of the micropropagation market include the rising need for organic fruits and vegetables in order to stay healthy and the development of horticulture and advanced crop protection technologies.