The global microdisplay market revenue stood at $1,145.6 million in 2020, and it is expected to grow at a CAGR of 17.1% during 2020–2030. The key factors responsible for the growth of the market include the rising adoption of head-up display (HUD)-integrated advanced driver assistance systems (ADAS) and increasing number of near-to-eye (NTE) applications.

During the COVID-19 pandemic, the production of all kinds of display screens was halted, and even the end products faced a reduced demand due to the closing of academic centers, corporate houses, and hospitality sector. Additionally, shops selling the end products have faced huge losses as they were also shut down for a considerable period. This, in turn, led to slower growth of the market for microdisplay in 2020 compared to earlier. 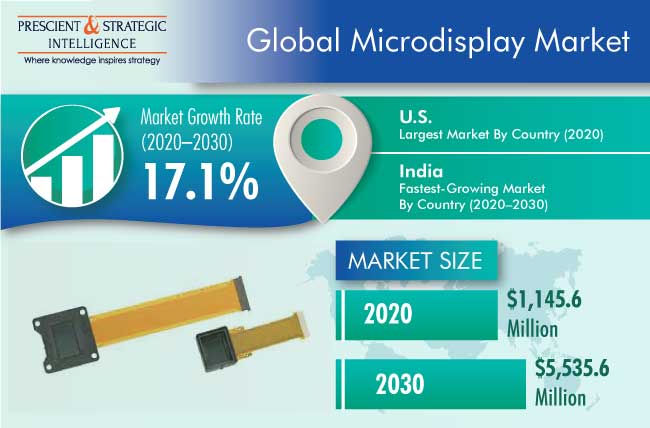 The LCD category held the dominating share in the microdisplay market in 2020, based on technology. This is majorly attributed to the fact that these displays account for a lower power consumption, compact size, and low price. As a result, using LCDs, manufacturers have been able to reduce the size of these components over time. LCD displays are currently being used in head-mounted displays (HMDs), HUDs, electronic viewfinders (EVFs), thermal imaging glasses, and wearables.

Projectors held the largest share in the market in 2020, based on product type. This is attributed to the rising adoption of data projectors in the education and business sectors. Moreover, the government initiatives for increasing the adoption of digital technologies are one of the prime reasons for the growing demand for projectors.

Microdisplays with Brightness of <1,000 Nits and Automotive End Users To Witness Fastest Growth

The more than 1,000 nits category is projected to be the fastest-growing category in the microdisplay market during the forecast period (2021–2030), on the basis of brightness. This can be majorly attributed to the growing demand for HMDs owing to the increasing adoption of augmented reality/virtual reality (AR/VR) devices. The screens with high-brightness are used in HMDs in industries such as medical devices, military & defense, and aerospace to obtain a clear view of an image or object. Moreover, these offers a better viewing experience to users, which results in their increasing popularity for high-brightness display devices.

The automotive category is projected to witness the fastest growth in the market for microdisplay, during the forecast period, under segmentation by end user. This is attributed to the growing adoption of ADAS, especially those integrated with HUDs, in automobiles. Further, the sports & entertainment category is expected to register considerable growth during the forecast period owing to the increasing adoption of VR gaming headsets.

Geographically, the APAC region held the largest share in the global microdisplay market in 2020, and it is further expected to lead the market during the forecast period. Moreover, the APAC region is expected to be the fastest-growing market during the forecast period. This can be attributed to the presence of a substantial number of manufacturers in the region, which has led to a decrease in the prices of these products and an increase in the penetration of microdisplay-based devices. 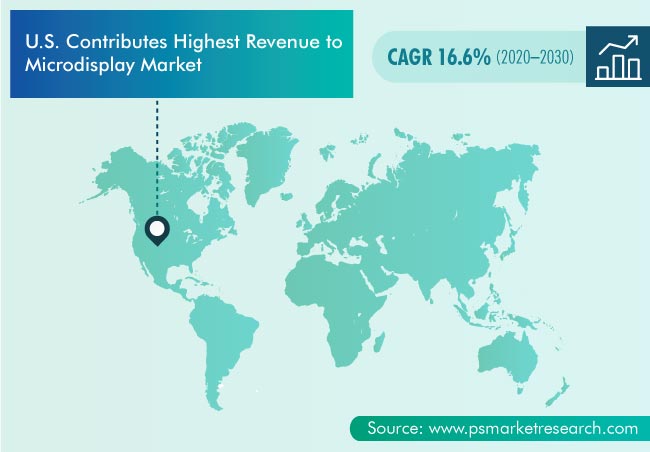 A key trend being observed in the microdisplay market is the use of OLED microdisplays in consumer electronics. These components offer a compact size with a high pixel density and resolution, thus resulting in a better picture quality. These components are being increasingly used in consumer electronic products, especially VR headsets, which are themselves witnessing a rise in adoption. Youngsters are swiftly adopting VR headsets compatible with smartphones and other devices for an improved gaming experience. Smartphone manufacturers, such as Samsung Electronics Co. Ltd. and One Plus Technology Co. Ltd., offer VR headsets with new smartphones.

The growing adoption of advanced ADAS, coupled with the surging demand for HUDs, is a key factor driving the microdisplay market. The demand for ADAS is increasing at a rapid pace, especially in the U.S., Japan, and China. As per the Federal Motor Carrier Safety Administration (FMCSA), in 2019, the U.S. started a project on the adoption of ADAS in the trucking industry because of ADAS’ demonstrated potential in reducing fatalities, injuries, and crashes. The project received a total funding of $0.65 million from the government, and it is expected to be completed by the end of 2021.

The rising demand for microdisplays in NTE applications is another major factor driving the market for microdisplay. These screens are increasingly finding usage in NTE devices, such as AR/VR headsets, HMDs, personal electronics, such as mobile phones and cameras; as well as full-color projection devices. Among these, AR/VR devices and HMDs are its major applications. The increasing demand for AR and VR devices from the media & entertainment and gaming industries strengthens the prospects for these products.

The global microdisplay industry is highly competitive in nature with the presence of numerous global players. In recent years, players in the industry have been involved in product launches in order to attain a significant position. For instance:

Frequently Asked Questions About This Report
What is the current microdisplay market size?+

Which is the dominant category in the technology segment of the microdisplay industry?+

Based on technology, the microdisplay industry is led by the LCD category.

Which is the largest regional microdisplay market?+

APAC is the largest market for microdisplays.

How does the growing automotive sector affect the microdisplay industry?+

The growing automotive sector is driving the microdisplay industry by leading to the rising demand for ADAS integrated with HUDs.

What are the key strategic measures in the microdisplay market?+

Most players in the market for microdisplays are launching new products.