The thriving automotive industry and rising smartphone proliferation are observed as key drivers for the global microcontroller market. Globally, the automotive industry has experienced systematic growth in recent years, where annual volume sales have surpassed prerecession levels, predominantly in emerging economies, such as Brazil, India, Thailand, Poland, Indonesia, and China.

Globally, there is a rise in tech savvy consumers and technological awareness, which has led to rapid adoption of smartphones among the populace. Due to which, the demand for low cost smartphones, including affordable 4G smartphones, in emerging economies is increasing. The global smartphone market is accelerating at a significant rate, with sales volume varying from market-to-market basis. This is projected to propel the growth of the microcontroller market during the forecast period (2016–2022). 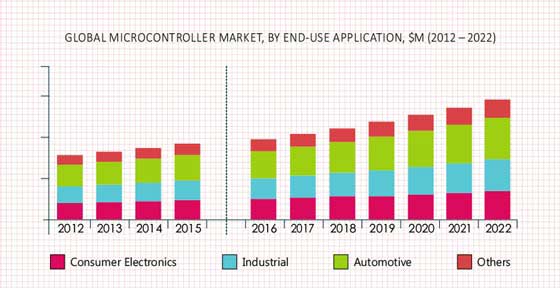 Technological developments in vehicle connectivity, interactive safety systems, and self-driving cars are projected to change the global scenario of the automobile industry in the coming years. Digital modernization of the automobiles has resulted in high demand for microcontrollers. This trend is projected to drive the microcontroller market growth during the forecast period.

Further, application of microcontrollers in smart power grid is gradually increasing, owing to reliability offered by microcontrollers during the processes of power generation and distribution. Also, rising energy cost and sustainability concern has led to large-scale migration of power systems from conventional to smart grid systems. This is expected to increase the demand for microcontrollers.

Also, average selling price (ASP) of microcontrollers has experienced declining trend in recent years. This trend is prominently observed in the 32-bit category, primarily due to presence of a large number of manufacturers and growing demand for internet of things (IoT) applications, which increase the competition among players in the microcontroller market. This has forced suppliers to cut down the ASP of 32-bit microcontrollers for IoT applications. Globally, this trend is being observed, as there is around double-digit downfall in year-on-year growth rate of the ASP of microcontrollers. Despite this, the overall market revenue is still expected to grow at a healthy CAGR during the forecast period.

IoT has huge potential and its demand is expected to rise across myriad applications, including consumer electronics, automotive, and industrial. IoT applications are gaining traction, primarily due to its salient features exhibited in smart devices. This is projected to drive the demand for microcontrollers during the forecast period. Further, growing adoption of connected cars in developing regions, such as Asia-Pacific, Latin America, and Middle East & Africa, is expected to augment the microcontroller market growth during the forecast period.

The growing need for energy-efficient vehicles is also observed as a driver for the microcontroller market. Adoption of hybrid and electric vehicles has significantly increased, primarily due to stringent regulatory framework for environmental concerns. On account of this scenario, the electric vehicle market is expected to gain traction, which is projected to generate huge demand for microcontrollers during the forecast period.

Key questions answered in the report