The global microarray analysis market size stood at around $3,846.7 million in 2021, and it will grow at a CAGR of 9.9% during 2021–2030, to reach $9,011.1 million. The major factors driving the market include the rising prevalence of cancer, government initiatives for genomic and proteomic research, and growing application area of microarrays. Microarray analysis is mostly used in pharmaceutical screening, biomarker identification, and toxicology screening, to know the mutation in the DNA. Moreover, microarray analysis can be used for screening various genes at the same time, which is one of its key advantages.

Globally, North America accounted for the largest market share, of about 40%, in 2021. It is expected to witness significant growth during the forecast period, owing to the fact that governments in the U.S. and Canada are continuously increasing their funding for cancer research.

The COVID-19 pandemic has disrupted the supply chain and interrupted the global microarray analysis market value chain, from raw material procurement to manufacturing, packaging, and distribution. When the lockdown was lifted, companies started functioning at their normal scale. 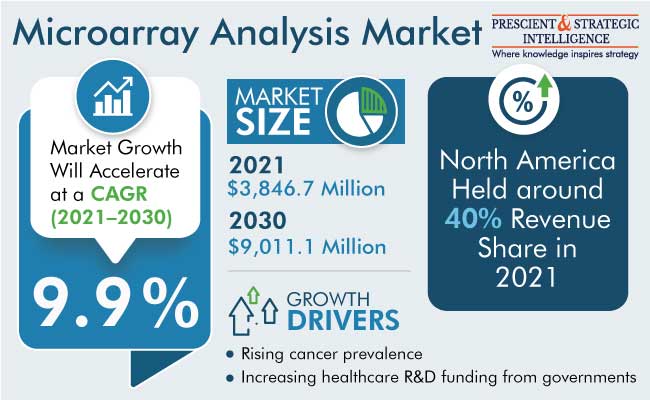 The consumables category is projected to grow at the highest CAGR, of over 10%, during 2021­–2030, based on product and service, owing to the surging count of research institutes and diagnostic laboratories utilizing microarray analysis. Moreover, the increasing research on mRNA and DNA methylation drives the consumption of consumables for carrying out microarray analyses.

Sofware & services held the third-largest microarray analysis market share in the past, as software is widely used identify and analyze genomes, by studying the data generated during the process. In the same way, the increasing number of experiments has boosted the adoption of advanced services and tools that enable users to carry out such studies. 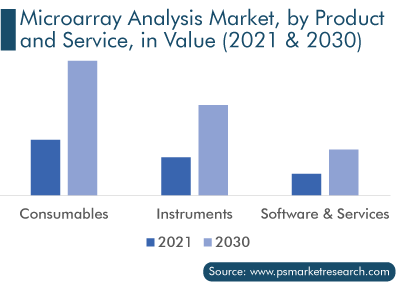 DNA microarrays held the largest market share globally in 2021, and this category is expected to witness a CAGR of around 10% during the forecast period. This is due to the fact that DNA microarrays are used in clinical diagnostic tests for a number of diseases. Additionally, they are used to determine which medicine might be best prescribed to a specific patient, because genes determine how the body handles the chemistry of drugs.

Moreover, DNA microarrays are majorly used to identify the mutations in the genetic structure of genes. For the analysis, short single-stranded DNAs of genetic disorders are produced, which are combined with the DNA of the patients. The DNA binds synthetically to the produced DNA, and the coherent material is used for the detection of the mutation type of cancer. Hence, the rising incidence of cancer is one of the major factors that contribute to the surge in the demand for DNA microarrays.

Increasing Use of Microarray Analysis in Research & Academic Institutes

Research & academic institutes held the largest share in 2021, and the value of the sale of the associated products to these users is expected to reach over $4.0 billion by 2030. The count of human genome study projects has increased in the past few years. Majorly, microarrays are used for the discovery of cancer drugs. Hence, the increasing R&D investments in the healthcare sector are expected to fuel the market growth.

Moreover, pharmaceutical & biotechnology companies are expected to witness swift market advance as several research programs are conducted by them for the development of drugs.

Europe is the second-largest market after North America, owing to the highly developed healthcare industry, advanced research & development infrastructure, and accessibility of the associated products. The usage of point-of-care testing for cancer detection has increased in the past few years in Europe, thus driving the microarray analysis market growth.

According to a government source, in 2020, around 4 million new cases of cancer were diagnosed and around 2 million deaths were registered in Europe. Hence, the market in Europe is expected to propel owing to the growing usage of advanced screening methods for cancer and also in the drug R&D process. 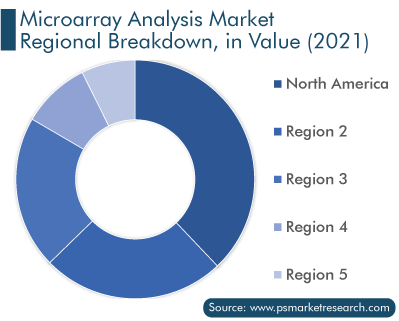 Rising Use of Microarray in Non-Cancer Application Is Driving Market

Microarray analysis has proved to be useful in antibiotic therapy, since bacterial genomic DNA outlasts the bacteria themselves in most situations. In such circumstances, DNA microarrays are commonly employed, since a diagnosis may be established using a tiny bit of DNA, rather than the greater number of bacteria required for a culture. In recent years, DNA-based microarrays have become the tool of choice for measuring gene expression. This is mostly due to the lower complexity and cost of usage, which allow this technology to become more accessible and standardized.

In June 2022, Illumina unveiled a research test co-developed with Merck to enable comprehensive genomic profiling and enhance research necessary to realizing the potential of precision medicine in cancer care.

In March 2020, Agilent Technologies Inc. announced the launch of three new microarrays for cytogenetic laboratories carrying out both postnatal and prenatal studies.

Based on Product and Service

Frequently Asked Questions About This Report
What are the major drivers for the global microarray analysis market?+

The market for microarray analysis solutions is driven by the rising cancer prevalence and increasing healthcare R&D funding from governments.

What segments are covered in the microarray analysis industry report?+

The segments of the microarray analysis industry report include product and service, type, application, end user, and region.

What will be the size of the microarray analysis market in 2030?+

Which region has the largest microarray industry growth potential?+

North America holds the largest microarray analysis industry share, and APAC will witness the highest CAGR over this decade.

Who is the largest end user in the microarray analysis market?+

Based on end user, the market for microarray analysis solutions is led by research & academic institutes.