Moreover, due to the ongoing pandemic, the government of all COVID-19-affected countries is taking measures to restrict human touch in the healthcare industry, as well as are promoting social distancing, in order to restrain the spread of the disease. Considering the present situation, robotic systems are better suited for supporting the operations of hospitals, by sharing the work pressure of the healthcare staff. This, in turn, is expected to propel the growth of the market in the coming years. 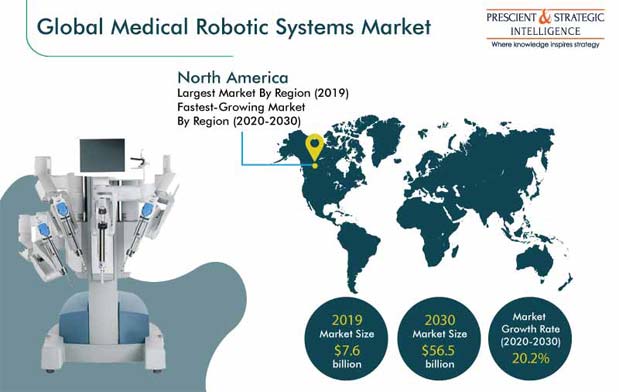 The surgical robotic systems category dominated the market during 2014–2019, when segmented based on type. This category is further expected to progress with the fastest pace during the forecast period, to remain the largest. The growth of the category is primarily attributed to the increasing demand for minimally invasive robotic surgeries, which require lesser time and effort, as compared to manual surgeries.

During the historical period, the treatment category accounted for the largest share in the market for medical robotic systems, when segmented on the basis of application. Moreover, the category is expected to retain its market domination in the forecast period. The market growth in this category is mainly buoyed by the advantages offered by robotic treatment procedures, such as high accuracy and less time requirement.

Cardiothoracic Surgery To Advance with Highest Rate during Forecast Period

The cardiothoracic surgery category is projected to witness the fastest growth in the medical robotic systems market during the forecast period, among the various indications. This can be attributed to the widespread burden of cardiovascular diseases (CVDs) and advantages associated with robotic surgery, including minimal blood loss and pain to patients, which lead to a shorter recovery time than the traditional approach.

Hospitals and ASCs were the largest end users of medical robotic systems throughout the historical period. Furthermore, the category is expected to continue to create the highest demand in the market during the forecast period. The dominance of the category is predominantly due to the increasing adoption of technologically advanced products, high efficiency of these systems, and large number of patients visiting hospitals to seek proper treatment.

The market for medical robotic systems in North America is expected to remain the dominant one during the forecast period, advancing with the highest growth rate. The growth in the North American market can be attributed to the presence of giant players, well-structured healthcare system, rising demand for minimally invasive surgeries, and funding by the government for medical robots. Furthermore, market players are actively involved in strategic developments and focused on raising funds, to establish strong grounds in the industry.

For instance, in February 2019, Corindus Vascular Robotics Inc. raised $15 million in a stock offering. Similarly, Vicarious Surgical, a developer of virtual reality for minimally invasive procedures, raised $10 million in funding led by the The Bill & Melinda Gates Foundation. These factors are likely to boost the demand for medical robotic systems in the region.

The most significant trends in the medical robotic systems market are technological advancements and launch of new robots, for instance, microbot targeted therapy. According to the 2019 paper “Microrobots Show Promise for Treating Tumors” published by the California Institute of Technology in Daily Science, researchers are working on an entirely new form of treatment. The new microrobots utilize near-microscopic mechanical particles to locate the target site for a drug or other therapies and then deliver the drugs to a specific body part, while being monitored and controlled from outside the body. 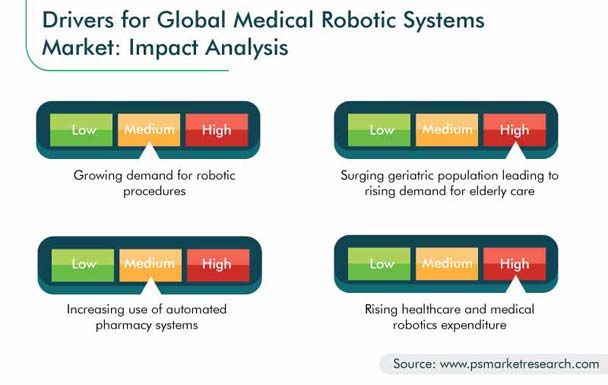 According to a study published in the Journal of the American Medical Association (JAMA) in 2020, robot-assisted procedures accounted for 15.1% of all general surgeries in 2018, a rise of just 1.8% from 2012. The use of robotic surgeries jumped 8.8% in the first four years, after hospitals started adopting it. Among the specific procedures that were tracked in the study, inguinal hernia repair witnessed the highest growth in the use of robots, from 0.7% of the cases in 2012 to 28.8% in 2018. Such a growing adoption of robotic procedures in the medical field is expected to drive the demand in the medical robotic systems market.

The surging geriatric population plays an important role in the growth of the industry. According to a report published by United Nations (UN), in 2017, there were 962 million people aged 60 or above globally, and this number will increase to 2.1 billion in 2050 and 3.1 billion in 2100. The growing financial burden, coupled with the shortage in the number of caregivers, indicates the need for finding a more efficient way to care for the world’s elderly.

Researchers all around the world are proactively striving to solve this problem and working to create autonomous robots capable of performing similar, if not the exact same, tasks as caregivers. Thus, the booming aging population, coupled with the rising shortage of caregivers, is likely to have a positive impact on the market for medical robotic systems.

Increasing Use of Automated Pharmacy Systems

The surging usage of automated pharmacy systems drives the growth of the medical robotic systems market. It reduces the time to locate the prescribed drugs in dispensaries and allows technicians and pharmacists to have more time with the patients. Its other advantages include the freeing up of space in the pharmacy, reduced dispensing errors, and lower patient waiting time. Due to such advantages, pharmacies are rapidly adopting these systems, hence boosting the growth of the medical robotic systems industry.

In recent years, players in the medical robotic systems industry have been involved in multiple strategic developments, in order to stay ahead of their competitors. For instance:

Some of Key Players in Medical Robotic Systems Market Are:

Frequently Asked Questions About This Report
What is the expected growth rate of the medical robotic systems industry during 2020–2030?+

Which “type” category will grow at the fastest pace and why?+

Based on type, the surgical robotic systems category is expected to grow the fastest in the global market in the coming years. This is primarily attributed to the increasing demand for minimally invasive robotic surgeries, which require less time and effort as compared to manual open surgeries.

What are the most-significant trends being observed in the medical robotic systems market?+

The provision of robotic minimally invasive surgeries (MIS), increasing launches of robotic systems for medical purposes, and technological advancements in the area of robotics are some of the major trends being observed in the medical robotic systems market.

Which is the leading player in the market for surgical robotic systems?+