The medical polyether ether ketone market size stood at $582.4 million in 2021, and rising at a compound annual growth rate of 7.8% during 2021–2030, it will reach $1,146.6 million by 2030. Over the last few years, the market for medical-grade engineered plastics has seen significant progress in terms of the FDA-approvals to them for in-vivo and in-vitro uses and the benefits they offer. The progress is augmented by the rapid replacement of metallic implants with those made from PEEK, in part, due to the increasing healthcare funding by governments and private players.

This high-performance plastic is a preferable material in trauma fixation, cardiovascular devices, dental implants, and many other medical applications. In this regard, the increasing geriatric population in European, North American, and Asian countries and the growing incidence of sports injuries will propel the market growth over the forecast period.

The ongoing industrialization and increasing research activities in emerging economies, such as those in the Asia-Pacific region, have driven the manufacturing of PEEK-based medical products. However, the demand for these products witnessed a sharp decline owing to the COVID-19 pandemic, as most of the hospital departments were non-operational. 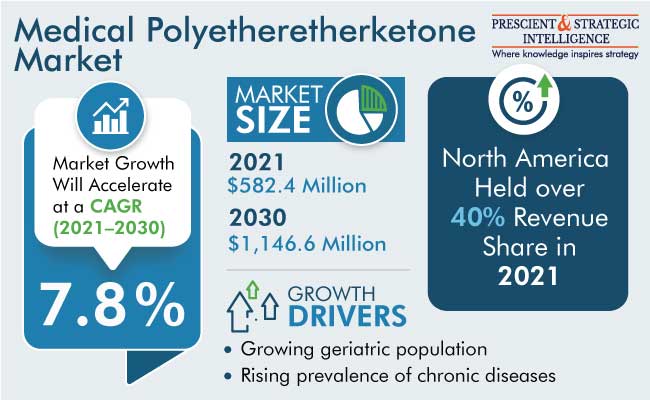 Key players in the market are focusing on a range of strategic plans for business development, including product launches, partnerships, and investments, primarily to achieve technological advancements in high-grade polymers for medical implants & devices.

Furthermore, in November 2020, In2Bones USA announced an agreement with Invibio Ltd. for R&D and the manufacturing of PEEK-based lower extremity implants.

Therefore, the growing interest of market players in medical-grade engineered plastics for the manufacturing of prosthetics, implants, and other medical devices improves the medical polyether ether ketone market outlook.

The stent and heart valve implantation products category is expected to rise with the highest CAGR, of around 9%, during the forecast period.

A large number of cardiovascular implants and devices are now being made from PEEK, such as stents, cannulae, and heart valve implants. Not only for its property of electrical isolation, this medical-grade plastic is also being used as a promising material for minimally invasive cardiac surgeries because of its differentiated mechanical performance.

The prevalence of several heart-related issues, such as coronary artery disease, heart attacks, and stroke, continues to increase. It is estimated that around 0.7 million people in the U.S. die from heart disease, while over 0.8 million suffer heart attacks each year.

Dental implants are also witnessing an increasing use of PEEK due to its ability to replace titanium, which is why this category is expected to advance with a CAGR of 8.5% during the forecast period.

Thus, the usage of semi-crystalline engineering thermoplastics for trauma fixation, cardiovascular, orthopedic, and orthodontic applications is expected to drive the medical polyether ether ketone market sales significantly. The rising expenditure in the healthcare industry, which is leading to technological advancements, is expected to further drive the market. 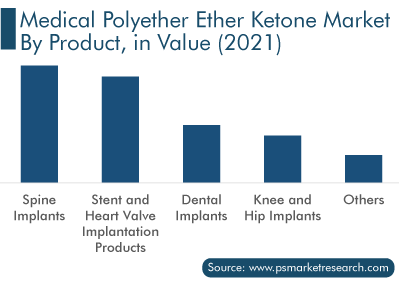 The market for medical-grade PEEK in the U.S. will witness a high growth rate during the forecast period, attributed to the rising number of healthcare facilities and innovations in medical devices. The demand for spine implants, stents, heart valves, and knee & hip implants is expected to increase on account of the growing population in the U.S., which will further drive the use of medical-grade plastics.

Additionally, the U.S has a large number of medical component and device manufacturers who are increasingly using PEEK in their products. The presence of key manufacturers is another major factor driving the medical polyether ether ketone market in the country.

Additionally, the large geriatric population in the region is contributing to the market advance. According to the latest U.S. census, about 16.5% of the country’s population, or about 54 million people, is over the age of 65, and this number is expected to rise to 74 million by 2030. The number of people aged over 85, who need the most-extensive care, is growing even faster.

Across the border to the north, the revenue from the sale of medical-grade PEEK in Canada is expected to rise with a CAGR of around 7% during the forecast period. The healthcare industry in Canada is gaining significant investments from both the public and private sectors. The total health spending in Canada was expected to reach $308 billion in 2021, with growth of around 2.2%. This would have represented 12.7% of Canada's gross domestic product and equaled $8,019 per Canadian. Health spending has trended upward since 1975, both in current dollars and in 1997 constant dollars.

Thus, the increasing healthcare expenditure by the government, growing elderly population, and a large number of manufacturers of PEEK and medical devices based on this material are expected to have a positive impact on the growth of the medical PEEK market over the forecast period.

In addition to this, Europe is contributing significantly to the medical polyether ether ketone market. Various European countries, such as Hungary, Bulgaria, Belgium, and the Netherlands, have growth opportunities in the form of the increasing medical tourism activities, which subsequently increases the demand for implants made from medical-grade PEEK.

During the forecast period, APAC is expected to be the fastest-growing region in the medical PEEK market. The growing medical tourism sector, increasing investments by manufacturers, improving healthcare infrastructure, and surging prevalence of chronic diseases are some of the major factors driving the growth of the market. China and India hold significant shares in the region as they have a large number of medical PEEK production plants and an enormous pool of patients with cardiac and orthopedic diseases. 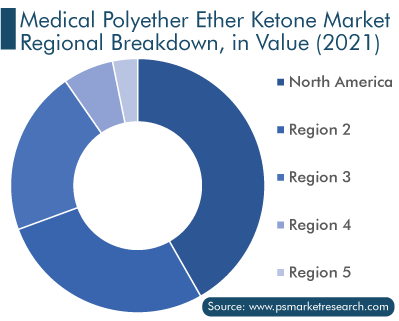 Frequently Asked Questions About This Report
What is the estimated value of the medical polyether ether ketone market?+

The 2021 value of the market for medical polyether ether ketone was $582.4 million.

What will be the growth rate of the medical PEEK industry?+

What are the prospects for the medical PEEK market in different regions?+

North America is the largest market for medical PEEK, while APAC will witness the fastest growth.

Which is the fastest-growing application in the medical polyether ether ketone industry?+

What are the medical polyether ether ketone market players doing for business growth?+

Players in the market for medical PEEK are expanding their operations in developing countries.