The global medical device analytical testing outsourcing market revenue stood at $4,711.8 million in 2021, and it is set to increase to $10,904.8 million by 2030, advancing at a CAGR of 9.8% during 2021–2030. This is attributed to the growing count of small-scale medical device makers, increasing demand for medical device effectiveness and safety verification and validation, implementation of severe government requirements, and rising preference of major medical device manufacturers for outsourcing testing services. 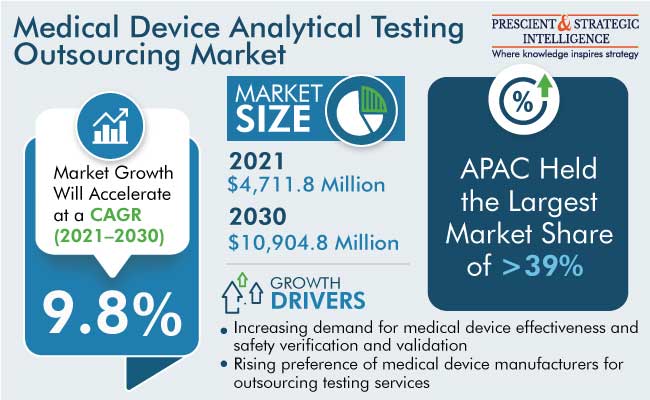 Cardiovascular disease research and development efforts are quickly enhancing the market growth potential. For instance, in December 2021, Boston Scientific Corporation launched the MODULAR ATP clinical study, which aims to study the performance, safety, and effectiveness of the mCRM modular treatment system. The system is made up of two cardiac rhythm management devices, which work together: the EMPOWER modular pacing system (MPS), a wireless pacemaker that can carry out both anti-tachycardia pacing and bradycardia pacing; and the EMBLEM MRI subcutaneous implantable cardioverter defibrillator system; the study is planned to be completed by December 2028.

Cardiac medical device testing outsourcing had the highest revenue, of $1,311.6 million, in 2021, and this value is predicted to rise substantially during the forecast period. The growing outsourcing of cardiovascular devices is due to the increasing demand for them as a result of the increasing prevalence of heart disorders. According to a source, more than 17 million people die of cardiovascular disorders every year, and this number is predicted to rise to 23.6 million by the end of 2030.

Furthermore, CVDs are extremely complicated, necessitating diagnostic and treatment equipment that is as safe and simple to use as possible. This, paired with an increase in patient numbers, is prompting medical device firms to engage with contract development and manufacturing organizations (CDMO), to increase production and outsource the analytical testing procedure.

General and plastic surgery device outsourcing is expected to develop rapidly throughout the forecast period. The availability of professional outsourcing organizations that meet the regulatory criteria, as well as the increasing demand for aesthetic procedures, are projected to drive the expansion of this category and bolster the medical device analytical testing outsourcing market advance.

Over the forecast period, the bioburden testing sector is predicted to grow at a significant CAGR as well. Bioburden testing refers to the assessment of the microbe population on medical devices. In compliance with international standards, the goal is to decrease microbial contamination prior to sterilization. 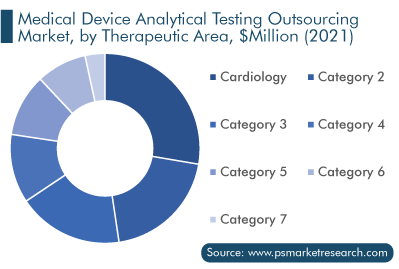 The reprocessed device category is the second-highest revenue generator, and it is expected to see the fastest medical device analytical testing outsourcing market growth, at a CAGR of around 10%, during the forecast period. Reprocessing is performed to cut expenses, but it frequently jeopardizes patient safety. However, the systematic research approved by the FDA proposes to minimize long-term healthcare expenditures and generate cost savings in developed countries, primarily the U.S. and those in Europe.

Reprocessing is inclusive of the complete sterilization, visible debris clearing, and repackaging & labeling of the medical device. Therefore, ultimately, the responsibility for any undesirable effects caused by the reprocessed device in patients falls on the reprocessor. On a global scale, medical device reprocessing has not yet found mass adoption, but it has already shown to give considerable advantages to healthcare practitioners. The vast majority of cardiac and nephrological catheters, orthopedic blades, fixation devices, endotracheal tubes, endoscopic devices, electrosurgical electrodes, electrophysiology catheters, and ophthalmic knives, are now reprocessable.

In 2021, hospitals led the market, accounting for a more than 84% global revenue share. This dominance can be credited to the increasing patient traffic at these facilities, as well as the rising hospital administration budgetary allocations for these services.

Another key factor driving the usage of analytical testing for medical equipment among hospitals is their growing need for medical devices based on newer technologies. These facilities house cutting-edge medical devices, which need to be effectively analyzed and tested for a higher performance, thus promoting the market growth. Furthermore, hospitals are the primary users of reconditioned medical equipment, which requires analytical services, thus making these healthcare centers one of the most-important target audiences for CDMOs.

The APAC region dominates the market, accounting for more than 39% of the total revenue in 2021, due to the government measures to improve the healthcare infrastructure. Moreover, the developments in the Indian and Chinese economies are set to bolster the market growth. Additionally, due to the region's enormous population and low per capita income, there is a high demand for cost-effective treatment options. Moreover, multinational corporations are eager to invest in such emerging economies.

Furthermore, the Chinese government’s efforts to simplify the regulatory system for overseas investors, accelerate the approval process for innovative medical equipment, form agreements to reduce the tariffs on imported high-tech devices, and relax the procurement control on certain equipment have contributed to the country's nearly double-digit medical device analytical testing outsourcing market growth, which is the highest in the region.

In addition, the U.S. leads the market, and it would grow at a significant CAGR, of around 10%, during the forecast period. This will be due to the fact that it is one of the most-important production centers for dependable and sophisticated medical products. As a result, original equipment manufacturers are increasingly turning to electronics manufacturing service providers to handle the growing number of electronic components in today's medical devices. The fast growth in the production of medical devices, to fulfill the North American region's expanding need for effective healthcare, is projected to be one of the primary factors driving the market expansion. 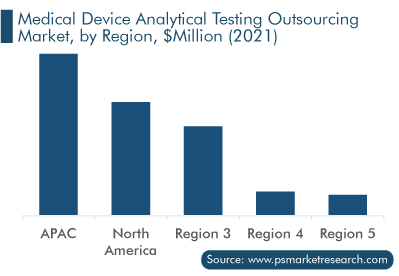 The key players in the industry have been involved in facility expansions to boost their revenue share. For instance, in January 2021, The Smithers Group Inc., which is a provider of consulting, testing, information, and compliance services, expanded its Shawbury medical device testing laboratory in the U.K.

The report provides a detailed segmentation analysis along with revenue estimation for the period 2017-2030.

Based on Therapeutic area

Frequently Asked Questions About This Report
How big is the medical device analytical testing outsourcing market?+

The medical device analytical testing outsourcing industry will witness growth of 9.8% over this decade.

What is the regional scenario of the medical device analytical testing outsourcing market?+

Which are the significant therapeutic areas in the medical device analytical testing outsourcing industry?+

The cardiology, diabetes, and general and plastic surgery therapeutic areas are the most significant in the medical device analytical testing outsourcing industry.