The COVID-19 pandemic has raised concerns over the consumption of meat products, and hence, the adoption of plant-based proteins is expected to grow, thereby propelling the meat substitutes industry. Furthermore, the pandemic has disrupted the supply chain of meat-based products, which has led to the reduced availability of fresh meat. This has shifted the attention of customers towards meat substitutes, which is why the sale of these products is surging. 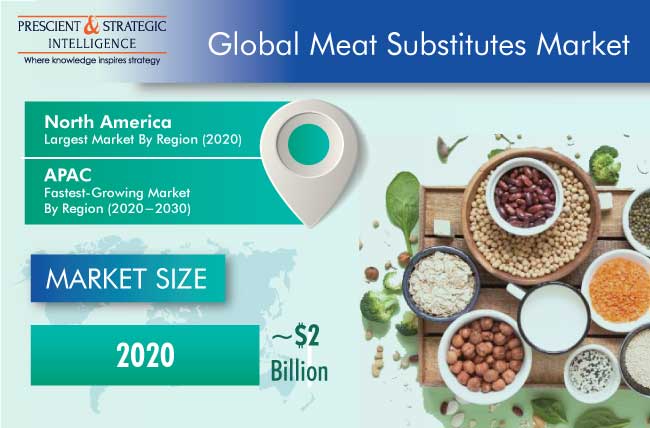 Soy-based products are expected to hold the largest share in meat substitutes market throughout the forecast period, based on source. Soy products have a better ability to absorb the rich flavors from other food products, and they can be used in several recipes, which makes them the preferred alternative to meat. Furthermore, they are also a rich source of proteins, and they resemble the texture and color of meat products

The seitan category is expected to show the highest growth rate in the forecast period, based on product, in the meat substitutes market. Seitan-based products are a great option for vegans who cannot consume soy products. In addition to this, they are available in multiple forms, such as marinated strips, slices, blocks, and shaped masses.

North America Is Projected To Generate Highest Revenue in 2030

The North American region is the largest market for meat substitutes. This is attributed to the high consumer preference for meat alternatives made from plant-based ingredients and rising health awareness among the people in the region. According to the Academy of Nutrition and Dietetics, vegans are less likely to develop heart disease, cancer, diabetes, and high blood pressure than meat eaters. Furthermore, on average, vegans are up to 20 pounds lighter than meat eaters. Moreover, consumers are increasingly opting for plant-based meat substitutes that can offer a similar texture, taste, and flavor as processed meat products at an optimum cost. 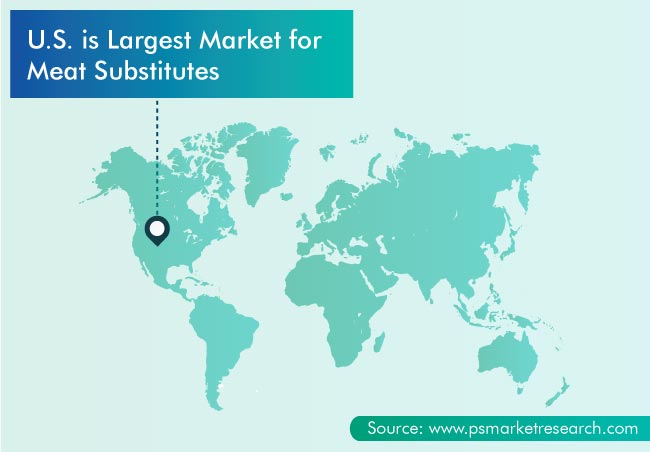 Food security is defined as the state of having reliable access to a sufficient quantity of affordable, nutritious food. According to the Climate Change and Land report of the United Nations (UN), food security may be jeopardized unless there is a transition away from red meat to diets richer in plant-based foods, such as fruits, vegetables, and legumes; and animal protein sources, such as chicken, eggs, pigs, and milk products, which emit lower amounts of greenhouse gases than red meat over their lifetime. According to another report by the UN, the world population will rise to almost 9.7 billion by 2050, and ramping up meat production to meet its needs is not sustainable.

Frequently Asked Questions About This Report
How much revenue did the global meat substitutes market generate in 2020?+

The global meat substitutes market reached revenue of ~$2 billion in 2020.

How has the COVID-19 pandemic impacted the meat substitutes market?+

The COVID-19 pandemic has positively impacted the growth of the meat substitutes industry.

Why will the meat substitutes industry boom in North America in future?+

The meat substitutes industry will boom in North America in the coming years, due to the growing public preference for meat alternatives produced from plant-based ingredients in the region.

What is currently trending in the market for meat substitutes?+

The surging consumer preference for vegan diets is currently trending in the market for meat substitutes.

Which region will register the fastest growth in the meat substitutes industry during 2021–2030?+

The Asia-Pacific (APAC) region will exhibit the fastest growth in the market for meat substitutes during 2021–2030.