The continuing COVID-19 pandemic has had an adverse impact on the MEA energy-based aesthetic devices industry. This is attributed to the restrictions on cross-border trade, hindrance in the supply chain, financial crisis, as well as operational challenges within and outside national boundaries. However, these products are expected to witness a notable increase in demand in the last quarter of 2020, after the restarting of operations in manufacturing plants, lifting of lockdown, and streamlining of their import and export. 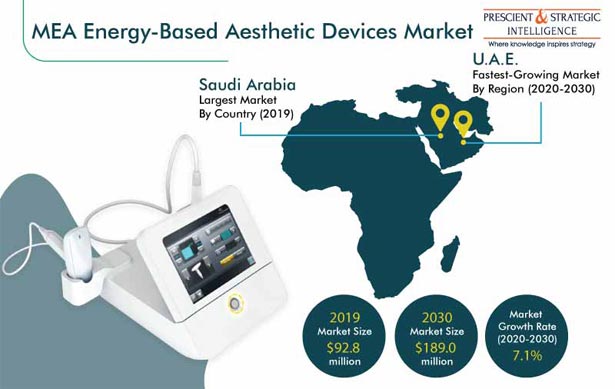 The laser-based category held the largest share in the MEA energy-based aesthetic devices market in 2019, when segmented on the basis of technology. This can be attributed to the rising awareness about the use of laser-based devices over other energy-based treatments, such as plasma and cryolipolysis. Furthermore, the industry for alexandrite-based devices is projected to advance with the highest CAGR during the forecast period, when the laser-based technologies market is further subcategorized based on type.

During the forecast period, the MEA energy-based aesthetic devices market is projected to witness the fastest growth in the fat reduction & body contouring category, when the industry is segmented in terms of application. This would majorly be a result of the growing obese population, which may opt for fat reduction and body contouring procedures to enhance their body shape during the forecast period.

The indirect bifurcation is projected to continue dominating the MEA energy-based aesthetic devices market, when segmented based on distribution channel, throughout the forecast period. This is primarily buoyed by the high rate of flourishment of the e-commerce industry in the MEA region. Furthermore, the increasing inclination of consumers toward home-use products, such as laser hair removers and light-emitting diode (LED) skin rejuvenating devices, which can be easily bought through online channels or from a retailer, further makes indirect distribution channel the higher-revenue-generating category.

In 2019, the dermatology and cosmetic clinics classification held the largest share in the end user segment of the MEA energy-based aesthetic devices market. Furthermore, the category is expected to continue holding the largest share in the industry during the forecast period. The reason behind the demand for energy-based aesthetic devices being highest at dermatology and cosmetic clinics is the fact that these medical settings are focused on providing aesthetic treatments, unlike hospitals, which are more inclined toward treating a range of medical conditions. Additionally, cosmetic treatments are mostly elective and not offered by all hospitals.

Saudi Arabia dominated the MEA energy-based aesthetic devices market during the historical period. This is because the country is witnessing a growing number of aesthetic surgeries, surging geriatric population, rising consciousness among people about their appearance, and increasing initiatives by public and private organizations to create awareness on minimally invasive aesthetic procedures. Moreover, the number of laser cosmetic surgeries in the country has dramatically increased over the past few years. According to a study conducted by the International Society of Plastic Surgery (ISAPS) in 2018, Saudi Arabia ranked 30th in the world with the highest number of cosmetic procedures in the world. Thus, the rise in the number of cosmetic procedures further indicates an increase in the demand for energy-based aesthetic devices in the country.

The U.A.E. is projected to witness the fastest growth in the MEA energy-based aesthetic devices market during the forecast period. The growing medical tourism sector, increasing disposable income, technological advancements, and surging geriatric population are some of the key factors driving the industry growth. According to Gulf News, the medical tourism industry value in the U.A.E. increased by 5.5% year-on-year to reach $3.2 billion (AED 12.1 billion) in 2018, supported by a number of government initiatives and rise in the number of medical tourists in the country. 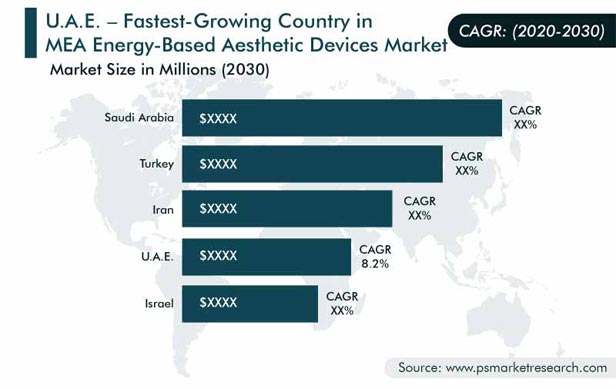 The increasing inclination toward having an improved appearance, among both men and women, is a major trend being observed in the MEA energy-based aesthetic devices market. In recent times, not only women, but men have also become conscious about their appearance and now have a desire to look young and healthy. This trend has been driving consumers to go for energy-based aesthetic treatments, such as intense pulsed light (IPL) and cryolipolysis. In addition, an increasing preference among Saudi women for liposuction, facelift, laser hair removal, and facial fat injection has been observed. The increasing rate of liposuction in Saudi Arabia is mainly due to the high prevalence of obesity, especially among women. Moreover, a gradual loss of collagen occurs in the skin due to hormonal changes, leading to changes in the body fat composition. 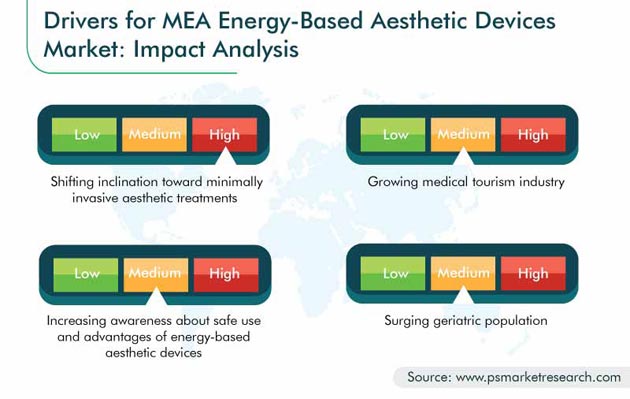 The inclination of consumers toward minimally invasive aesthetic treatments has been increasing in the MEA, which supports the growth of its energy-based aesthetic devices market. It has been observed that surgical cosmetic procedures involve a high cost and, at times, can be medically unsafe, leading to several side-effects. With the advent of minimally invasive procedures, the adoption of energy-based aesthetic devices has been on the rise. For instance, fat removal and body contouring procedures performed by laser and cryolipolysis devices have eliminated the risks associated with invasive surgical procedures, such as infection and pain during recovery. Hence, the preference for minimally invasive or non-surgical treatments is expected to fuel the market growth in the region during the forecast period.

It has been observed that the rapid expansion of the medical industry, due to globalization, is increasing the awareness of consumers about alternatives to surgical aesthetic treatments. Over the past few years, patients from advanced and developed countries, such as the U.S., the U.K., and Australia, have traveled to India, Turkey, South Africa, Mexico, Singapore, Costa Rica, Thailand, and other emerging economies, to seek medical treatment. Cosmetic surgeries are one of the top medical services for which patients are traveling from developed nations to emerging economies. This is mainly because less- costly treatments are offered in emerging economies, compared to developed countries. This increasing number of tourists for various types of medical treatments, including aesthetic procedures, is expected to drive the MEA energy-based aesthetic devices market.

Market Players Are Launching New Products to Break through Competition

In recent years, players in the MEA energy-based aesthetic devices industry have launched new products, in order to stay ahead of their competitors. For instance: 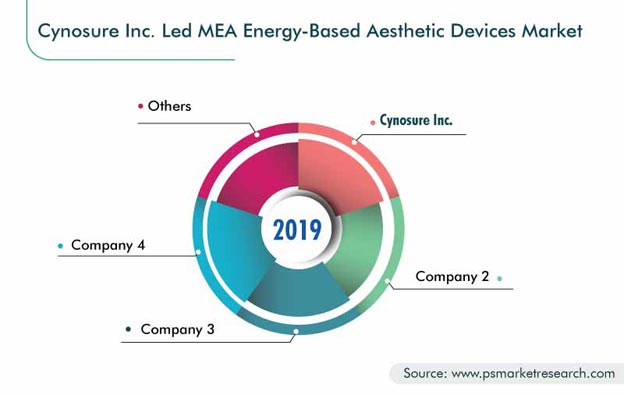 Some Key Players in MEA Energy-Based Aesthetic Devices Market Include: