The global lubricants market in 2019 was valued at $95,403.9 million, and is expected to demonstrate a CAGR of 2.3% during the forecast period (2020–2030). The growing automotive industry in developing economies, such as China, India, and Brazil, and the increasing awareness among consumers toward the usage of lubricants are some of the key factors for the growth of the lubricants industry.

The world is going through the COVID-19 crisis and so the lubricants industry. Not only the pandemic, but also the crude oil supply–demand imbalance and its future uncertainty are impacted the market negatively. As per the International Energy Agency(IEA), the global oil demand is expected to fall by a record 9.3 million barrel per day year-on-year in 2020.

The demand–supply imbalance with respect to crude oil and the industrial slowdown due to the pandemic have resulted in the slowdown of most of the industries, including automotive and other manufacturing. Since the lubricants market is highly linked with automotive and manufacturing industries amongst other, therefore, it is also witnessing the negative COVID-19 impact. 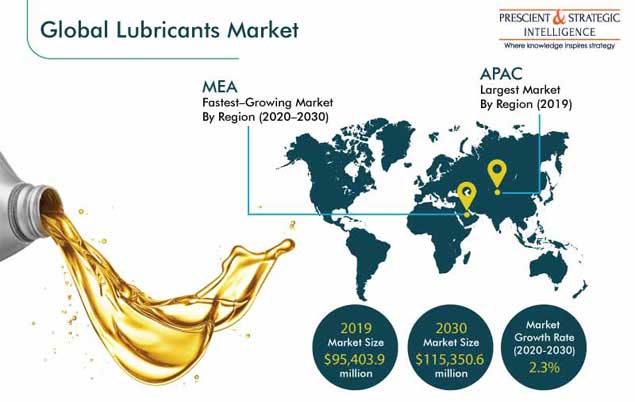 The mineral oil category, based on base oil, held the largest share in the lubricants market in 2019. This is mainly ascribed to its easy availability and low cost, and high demand from manufacturing facilities. Further, consumers are more aware of mineral oil, as compared to synthetic and bio-based oil. In addition, presence of larger number of players in the market, which are engaged in the production of mineral oil.

Engine Oil to Retain its Position

The engine oil category is expected to account for the largest market size in 2030, on the basis of product type, on account of increasing demand for vehicles and growing transportation industry across all regions. Further, nowadays people are more aware about the advantages of using lubricants in their vehicles, such as these help in improving the vehicle mileage and increasing vehicle life period.

Automotive and Other Transportation Industry – the largest Consumer of Lubricants

The automotive and other transportation industry accounted for the largest size in 2019 in the lubricants industry, based on end-user. The growing automotive and other transportation industry due to increasing sales of vehicles, owing to the rising people per capital income across the world. For instance, as per the International Organization of Motor Vehicle Manufacturers, in 2014, 88.3 million of new vehicles were sold, while in 2019, the number reached to 91.3 million.

Further, the growing mobility services sector across the globe is also propelled the sales of new vehicles. Thus, resulting in increasing demand for lubricants.

The APAC region held the largest share in the lubricants market in 2019, and this trend is likely to continue during the forecast period. This can be majorly attributed to the shift in world manufacturing plants in Asian countries, especially in China and India, owing to the less labor costs, and less stringent environmental rules and regulations, as compared to western countries.

Further, as per the FUCHS PETROLUB SE, in 2017, the region has less per capita lubricants demand, compared to North America, Europe, and Latin America. Therefore, companies operating in the market are finding huge growth potential in the region. As a result, the companies are investing millions of dollars to increase their market share in APAC.

The MEA lubricants market is expected to witness the highest growth rate during the forecast period, owing to the availability of numerous oil wells in the region. Therefore, prices of crude oil and its by-products, such as lubricants, are low, which helps the region to properly utilize the advantages of lubricants in manufacturing industries. Moreover, from past few years, the region has been in a way to change its dependency from oil to diversified number of industries for economic purpose, which would lead to the establishment of a larger number of industries in the region. This will eventually increase the demand for lubricants in foreseeable future. 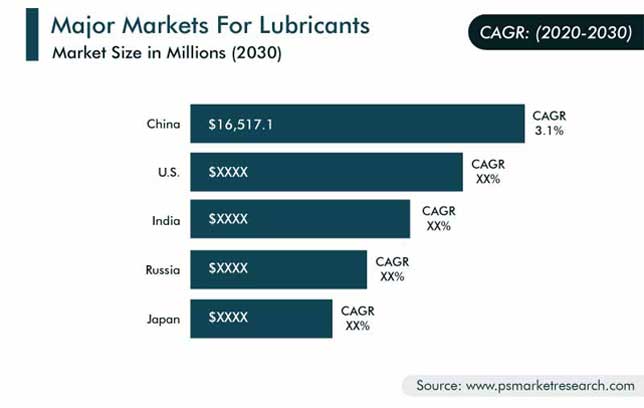 Further, companies and governments of several countries are also developing new techniques and policies, in order to increase the demand for bio-based lubricants. For instance, Farm Security and Rural Investment Act (FSRIA), created by the United States Department of Agriculture, increased the use and procurement of bio-based products by creating labeling program to enable marketing of bio-based products and procurement preference program for federal agencies and their contractors.

From the past few years, the automotive sector in developing countries, such as China, India, Brazil, and Mexico, has witnessed a surge in sales of new vehicles, on account of increasing per capita income and consumers’ awareness pertaining to the use of lubricants in vehicles. The increasing sales of new vehicles provides the growth opportunities to lubricant manufacturers. Lubricant is used in crankcase of a vehicle engine, which ensures efficient operation of the vehicle. Also, lubricants are used in vehicles to reduce friction, which leads to longer lifespan and reduce wear and tear of the vehicles.

Lubricants found applications in almost every industry, however, in the past, the awareness about lubricants usage was limited to western countries only. But nowadays, consumers across the globe are much more aware about the benefits of using lubricants in machinery, vehicles, and other equipment. Moreover, companies are also adopting customer-oriented method, so as to focus on creating brand awareness among the consumers through visual and print media. Some examples of the method are trade shows and promotional campaigns, where the companies offer free samples or gifts to the consumers, thus leading to increase the interest and awareness among the consumers about lubricants.

With the rise in awareness about lubricants, people more often start using lubricants in industries as well as in vehicles, thereby boosting the growth of the global lubricants market. 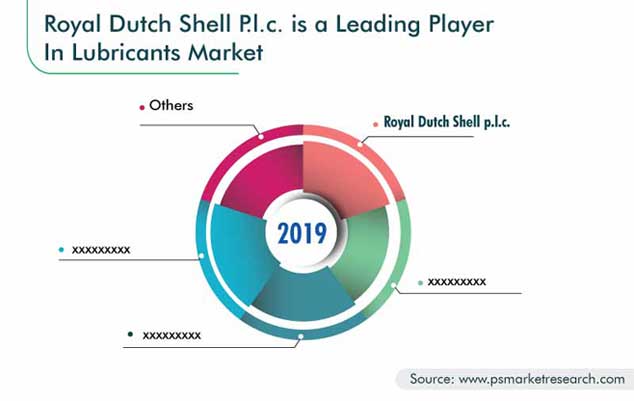 Some of Key Players in Lubricants Market Are:

The lubricants market report offers comprehensive market segmentation analysis along with market estimation for the period 2014–2030.

Based on Base Oil