The global LED lighting market was valued at $55,201.9 million in 2020, and it is expected to grow at a CAGR of 10.7% during the forecast period (2020–2030). The key factors responsible for the growth of the market include the booming adoption of energy-efficient lighting solutions, declining prices of LED lights, and increasing infrastructure development activities.

The COVID-19 pandemic has severely impacted the market for LED lighting globally. Key economies, including China, India, the U.S., and European countries, have been affected on account of the lockdown measures implemented by them. Due to this, residential project launches have been pushed back, which has driven light sales down. Besides, the disruption in the supply chain, particularly of electronic components, such as drivers and chips, imported from China has impacted the market. Moreover, the governments of various countries have put restrictions on intercity and interstate travel, which has impacted the hospitality and travel industries, thereby reducing the demand for LED lighting further. 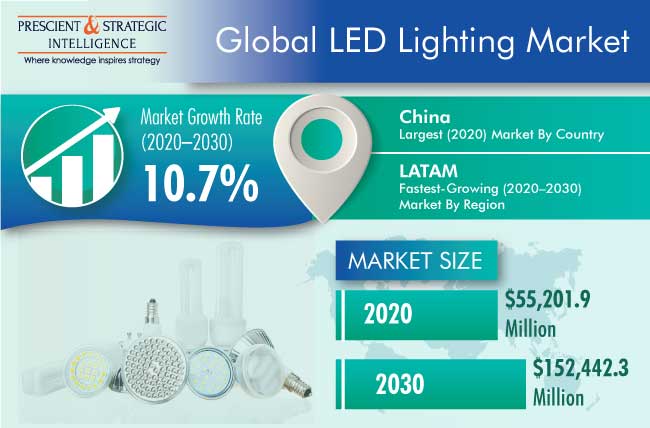 Luminaires Held Larger Share due to Their Proliferating Adoption

The luminaire category generated the higher revenue in the LED lighting market in 2020, based on product type. This can be attributed to the high demand for LED luminaires, primarily from the newly constructed residential and commercial buildings. Furthermore, with the increasing government initiatives for the adoption of LED lighting in India, China, and the U.A.E., the market for LED luminaires is projected to grow at a significant rate in the near future.

The retrofit installation category is expected to register the higher CAGR in the LED lighting market during the forecast period, based on installation type. This can be attributed to the increasing replacement of incandescent and sodium-vapor lamps with LEDs in Japan, India, China, South Korea, the U.A.E., and the U.S. Essentially, with the phasing out of incandescent bulbs in these countries, the demand for LED lamps for retrofitting is growing, which is driving the market growth in this category.

Globally, Asia-Pacific (APAC) was the largest market for LED lighting in 2020. This can be mainly attributed to the increasing demand for such lighting from the residential sector, primarily in China, India, and South Korea, on account of the increasing disposable income and growing construction of housing establishments. Moreover, due to the increasing population, growing infrastructure and industries, and rising focus on energy efficiency, the demand for LED lights for commercial and industrial applications is booming, thus driving the market in the region.

The LED lighting market in the Latin American (LATAM) region is expected to record the highest growth rate during the forecast period. The market growth here is mainly being driven by the rising middle-class population, rapid urbanization, and increasing residential construction activities. Moreover, the growing focus on smart street lighting and solar street lighting in Brazil and Mexico is expected to propel the demand for outdoor LED lighting solutions during the forecast period. 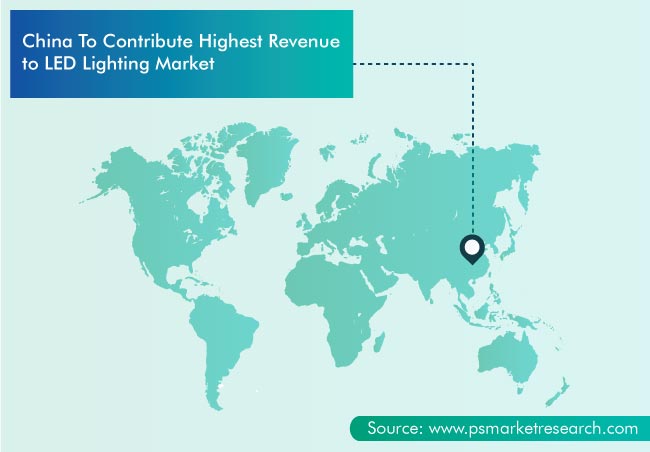 The usage of smart LED lighting solutions is one of the key trends being observed in the LED lighting market. Smart LED lights have gained popularity in recent years, primarily in Japan and China, owing to their high energy efficiency and the ability to control the lighting from anywhere, anytime, from smartphones. In addition, their advanced features, such as automatic off/on, adaptive lighting, and motion activation technology, help increase the cost savings for both residential and commercial end users by reducing power consumption when compared to traditional lighting solutions. Moreover, smart lights allow users to change the color of the lights to create an indoor ambiance as per their mood and preference. 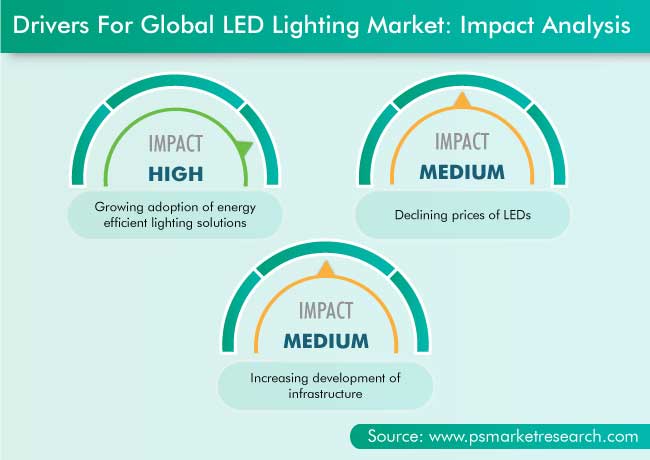 With the governments of various countries, such as India, China, and Indonesia, focusing on the modernization of infrastructure, the demand for LED lighting solutions has considerably increased in these economies in recent years. Moreover, the governments of Spain, the U.A.E., Singapore, India, China, and Austria are investing heavily in smart city projects. For instance, the Government of India has announced plans to transform 100 cities across the country into smart cities by 2030 and approved around $15 billion for this project. Similarly, Barcelona (Spain) has deployed more than 3,000 smart streetlights based on the LED technology. Hence, the rampant development of infrastructure is driving the demand the LED lighting market globally.

In recent years, players in the global LED lighting industry have been involved in product launches in order to attain a significant position. For instance:

Frequently Asked Questions About This Report
What will be the LED lighting market 2030 value?+

How many segments are in the LED lighting industry report?+

Why Will LATAM be the fastest-growing LED lighting market?+

The market for LED lighting will grow the fastest in LATAM because of the rampant infrastructure development and rising focus on smart and solar-based street lights in the region.

What is the major LED lighting industry trend?+

The key trend in the LED lighting industry is smart lights that are controllable via smartphones.

What are LED lighting market players doing for sales growth?+

Players in the market for LED lighting are launching new products.