The LED driver market size was valued at $8,710.9 million in 2021, and it is expected to reach $62,147.8 million by 2030, propelling at a growth rate of 24.4% during 2021–2030. The market growth is primarily attributed to the technological advancements in lighting components coupled with the rising production and consumption of energy-efficient LED drivers.

Lighting is one of the fastest-growing business segments and the use of smart lights is projected to boost the industry. Moreover, the proliferating use of lighting across different verticals, such as manufacturing, healthcare, retail, and automotive, favored the growth prospect of the market.

There are several governments, including India and China, which are laying emphasis on promoting the deployment of these products instead of traditional lights, which, in turn, foster the production and consumption of the drivers. For instance, in August 2018, the Government of India, the Energy Efficiency Services Limited (EESL), and the World Bank signed a $220 million loan agreement and $80 million guarantee agreement for the India Energy Efficiency Scale-Up Program, which expanded the use of the efficient tube and LED street lights. 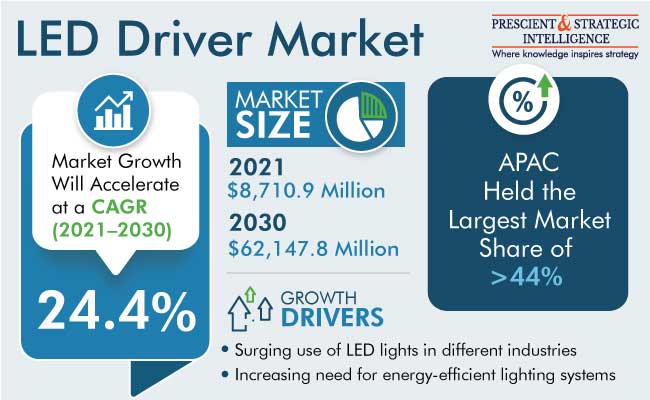 Technological improvements lead to the development and utilization of organic LEDs and increase the preference for advanced forward lighting system technologies in LEDs for bend headlights. With flourishing sales of automobiles and replacing damaged lights, the automotive industry is focusing on substituting halogen lights with LEDs. The demand for halogen light replacement is significantly recorded in industrialized countries, which fortifies the LED driver market.

Constant Current To Dominate the Market

Among supply types, the constant current category accounted for more than 60% share of the market revenue and is projected to maintain its dominance during the forecast period as well. This is ascribed to the growing preference for constant current LED drivers, as they provide consistent forward current irrespective of the input voltage fluctuations.

Furthermore, a constant current driver is an excellent method to drive high-power LEDs, as it maintains constant brightness across all LEDs in series. With the increasing output power of these products, majorly where long strings are involved, the requirement to more meticulously manage the drive current, prospers the use of constant current drivers.

The lighting application category is expected to register the fastest growth over the forecast period, advancing at a CAGR of 25.7%. Green lights are beneficial for everything from treating skin conditions to reducing pain, promoting sleep, and even fighting depression. In addition to this, they have the ability to help people who suffer from migraine and photophobia (light sensitivity) and they do not contain mercury, unlike their counterparts, such as high-intensity discharge (HID) lamps. Thus, these factors stimulate the demand for LED drivers for this application across the globe.

Further, automotive is the second-fastest growing application category, growing at a CAGR of 24.5% during the forecast period, owing to the rising adoption of LEDs and laser lights in automobiles. These products are replacing traditional light sources due to their attractive features, such as long lifetime, high brightness, high-energy efficiency, and low cost. Laser headlights are appreciably used in adaptive technology applications, such as automatically controlling brightness when other cars approach, curbing the risk of impairing vision. Also, they provide huge illumination that ameliorates safety during night driving or rainy and foggy driving conditions.

On the other hand, consumer electronics has emerged as the lucrative application category, which is expected to boost the LED driver market outlook. This is due to the booming demand for various consumer electronic products, including smartphones, TVs, and computers, over the years. 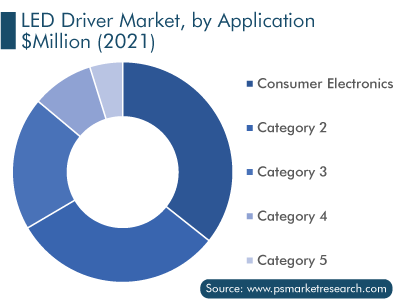 Governments around the world are focusing on investing in smart city initiatives, with a focus on greener transportation, intelligent buildings, and other smart technologies. Moreover, the emergence of 5G technology, robust urbanization, surge in focus on reducing operational expenses, and building performance management support the expansion and construction of smart building projects.

For instance, London, Lisbon, and Milan are the lighthouse cities that have implemented digital solutions, including retrofitted buildings and energy management systems. Similarly, in January 2020, Toyota Motor Corporation announced plans to establish a city of the future, called the Woven City, on a 175-acre site at the base of Mt. Fuji in Japan.

Further, the integration of advanced IoT technology in LED offers better lighting in different places and helps to manage and monitor the working status of lights from any location at any time effortlessly. With the cloud access and plug-and-play module, control over lighting becomes simple. IoT dwindles the maintenance cost, as it allows organizations to check the operational status of the lights. Hence, this amplifies the consumption of LEDs as well as their drivers, globally.

In 2021, APAC registered more than 40% of the LED driver market revenue, and the region is projected to continue leading the industry in the long run. The favorable government initiatives to promote energy-efficient lighting, the rising competition among players resulting in product innovation, and the increasing number of infrastructure projects are the major factors advancing the growth of the market.

For instance, in India, till January 2015, the Power Ministry distributed 367.8 million LEDs under the Unnat Jyoti by Affordable LEDs for All (UJALA) program in the span of seven years, which saved 47,778 million units of electricity per annum. Similarly, in April 2021, the government announced a production-linked incentive (PLI) scheme for white goods, including air conditioners and lights, with a budgetary outlay of $843.8 million (INR 6,238 crore).

In addition, North America and Europe were the second- and third-largest revenue contributors to the market in 2021, respectively. This is imputable to the proliferating penetration of lighting solutions in the commercial and industrial sectors, particularly automotive. Moreover, the surging personal disposable income and the rising number of owner-occupied housing units aid the use of these solutions in these regions.

With the objective of achieving the Net Zero by 2050 roadmap by 2030, several nations are concentrating on bumping up LED sales to more than 100% by 2025, as the LEDs that replace these bulbs are claimed to consume five times less energy. Also, all halogen light bulbs are prohibited and substituted with environmentally conservative LEDs in various European countries. For instance, the U.K. began phasing out halogen lightbulbs in 2018. Thus, government policies and legislations drive the consumption of these products, which, in turn, fuel the demand for LED drivers in these regions. 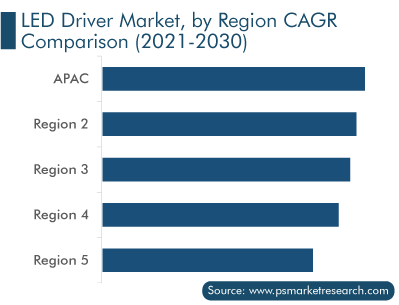 The market is highly competitive, and various key players are strongly concentrating on involving in strategic activities, including product launches, with the objective of expanding their product portfolio and achieving higher sales. For instance:

In March 2022, Macroblock Inc. launched its next-generation LED automotive lighting driver integrated circuits (ICs), MBI6665Q and MBI6659Q, which are appropriate for the intelligent automotive lighting application, and they have gained the AEC-Q100 qualification.

Key Players in the LED Driver Market Are:

Based on Supply Type

Frequently Asked Questions About This Report
What was the size of the LED driver market in 2021?+

What will be the growth rate of the LED driver market during the forecast period?+

Which is the largest application area in the LED driver market?+

Consumer Electronics is the largest application area in the LED driver market.

What are the major drivers for the LED driver market?+

The major drivers of the LED driver market include the surging use of LED lights in different industries, the increasing need for energy-efficient lighting systems, and the burgeoning number of smart buildings.