The growth can be ascribed to the expansion in internet connectivity in advancing economies, which is driving the adoption of connected devices and the development of networking protocols. Moreover, the increasing number of artificial-intelligence-based devices is propelling the market. Already, in 2021, there were more than 10 billion active IoT devices, which has led to avast requirement for such chips. 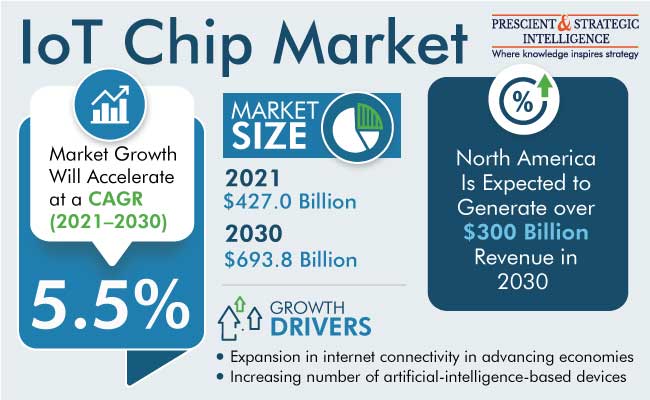 North America has the leading position in the IoT chip market, and it will hold the same position till 2030, with a value of over $300 billion.

The growth in the region is attributed to the rising R&D in the field, for new and advanced technologies. The increasing demand for consumer electronics is another key factor driving the growth in the region. Moreover, various key players have a strong foothold in the region, thus making it easier for end users to procure these semiconductor components.

The development of the advanced infrastructure raises the demand for better wireless connectivity solutions. This, in turn, leads to the rise in the demand for Logic devices and ICs, particularly for smart cities, which would be characterized by smart transportation systems and connected automobiles, as well as for residential applications. Moreover, governments in the region are taking steps to further this concept, to achieve sustainable living. For instance, in 2022, the Canadian government planned to invest $240 million to develop IoT chips and photonics technology. 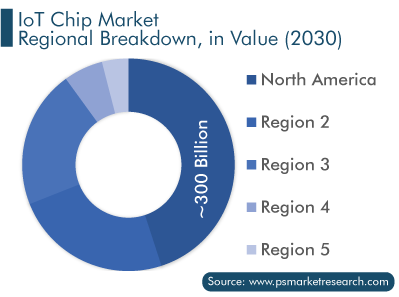 Logic devices held the largest share in 2021, due to their enhanced prototyping and reprogramming ability for debugging. Logic devices, especially field-programmable gate arrays (FPGA), are increasing in adoption because they can be customized by specifying the logic of the function of each logic block. The improved performance, programmability, and cost-efficiency are other factors expected to boost the adoption of such devices.

The rising demand for smartwatches and the increasing shipment of logic devices drive the market. FPGAs function faster compared to other devices and possess the ability of modifying, updating, and reconfiguring their functionality, to suit completely different and novel tasks. For instance, in India, more than 14 million wearables were shipped in 2021, over 12 million of which were smartwatches. The rising demand for such wearable for tracking the heart rate, respiration rate, and blood oxygen levels drives the growth of the market.

The sensor category will register the fastest growth during the forecast period, because of the increasing usage of temperature and pressure sensors in the manufacturing industry. The rising use of motion and position sensors in smart electronics, such as security cameras, alarms, and live video monitoring applications, is also expected to contribute in the growth of the sensor category. 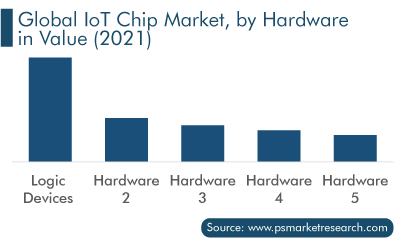 Consumer electronics sales are growing at a good pace due to the rising adoption of smart appliances for residential applications, such as door locks, thermostats, and home monitors. Moreover, smartwatches are widely used in the healthcare and fitness industry. Moreover, IoT chips are used for tracking the real-time location of medical equipment, including wheelchairs, oxygen pumps, and defibrillators.

Connected wearable devices include smartwatches, smartphones, laptops, smart shoes, and smart jewelry. They use these chips for performing different functions, and hence, their rising usage is driving the growth of the market. These devices combine internet connectivity with sensors and ease of integration, so as to perform functions based on user requirements. A single wearable device can measure multiple indicators of overall health, such as blood pressure, body temperature, alcohol, glucose, and lactate, levels, and body hydration, in the real time, thus allowing for the non-invasive monitoring of a person’s wellbeing.

Similarly, smart shoes provide various benefits to athletes as they are able to measure blood pressure, stride length, speed, and speed. They can also track the calories burned and steps walked, and they can also be connected to smartphones through Bluetooth, to provide real-time suggestions on all these aspects of one’s routine. The fast adoption of such accessories because of their convenience drives revenue generation in the market.

Wearable devices mostly use lower-frequency radiation, for the safety of individuals. Hence, the rising awareness among people about the benefits of such devices, including quick results and lower harm to the health of individuals, leads to their rising adoption. Manufacturers are also creating awareness by sharing information on social websites about the cybersecurity and benefits of such devices. Moreover, the demand for such components has grown alongside the shift of humans toward digital solutions and their strong emphasis on easier data access.

The increasing R&D in the field of IoT and the rising need for better lifestyles are the two major factors boosting the demand of IoT chips. As a result of this extensive R&D, various technologies have emerged in these semiconductor instruments, such as e-SIM, mesh network, and 5G.

Moreover, scientists are developing methods for successfully bioprinting complex organs, perfecting predictive medicine, and using genet editing to cure diseases. The implementation of IoT in the laboratory environment, to add a new layer of efficiency to the way research and development are conducted, is the first step in having a smart lab. With this, experiments are being executed faster, data is being recorded more accurately, and research has become more accessible. As the digital world converges with the physical, the integration of IoT in laboratories would revolutionize the research field across industries.

Hence, businesses are focusing on optimizing costs, reducing risks, and minimizing the time to market for their IoT chips, to benefit a host of sectors. For instance, semiconductor firms are developing battery-equipped M2M wireless sensors to collect equipment data easily. The collected data is visualized by an AI platform, to be used for manufacturing improvements. The recent advanced technologies used in this industry are cloud-connected sensors and AR, while the new connectivity protocols in IoT-connected devices include NB-IoT, LTE, and BLE 5.0.

Frequently Asked Questions About This Report
What segments are covered in the IoT chip market report?+

The market for IoT chips is segmented by hardware, application, and region.

What are the key driving factors for the growth of the IoT chip industry?+

What was the size of the global IoT chip market in 2021?+

Which is the leading region in the IoT chip industry?+

The IoT chip industry is dominated by North America.

What is the CAGR of the IoT chip market?+