The Indian electric rickshaw market was valued at $786.2 million in 2019 and is expected to reach $1,394.2 million by 2025, advancing at a CAGR of 33.3% during the forecast period (2020–2025). Increasing government incentives to boost the adoption of electric vehicles (EVs) and the implementation of stringent environmental policies in view of the growing concerns over rising air pollution are driving the market growth.

In addition, factors such as the growing end-user affordability, cost advantage over auto rickshaws, better daily earnings than cycle rickshaws, and increasing investments by manufacturers for the design and development of more efficient and affordable rickshaws are expected to benefit and boost the market during the forecast period.

The unorganized and local players operating in the market are expected to be severely impacted by the COVID-19 pandemic. It is also estimated that 30% of these manufacturers/assemblers will permanently shut down their business post COVID-19. The sales figures are expected to reach the 2019 level in 2022, with the market gradually recovering thereafter.

The challenges related to imports and the rising India–China dispute will promote the local and in-house development of EV components in India in the coming years. The price of electric rickshaws is also expected to increase by nearly 8–10% in the short term. Moreover, the share of load carrier electric rickshaws is projected to increase significantly during the forecast period, on account of the need for the last-mile transportation of logistic goods, including fruits and vegetables. 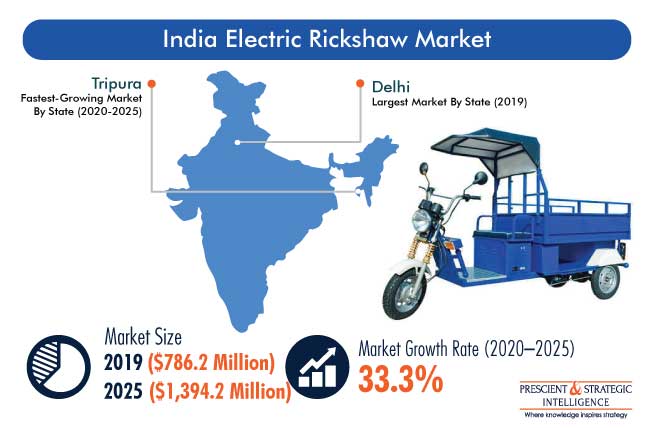 High Passenger Base Leading to Inflated Demand for Electric Rickshaws

Passenger carriers dominated the Indian electric rickshaw market during the historical period (2014–2019) and are expected to continue holding a larger market share, in terms of both value and volume, in the coming years as well. This can be majorly attributed to the growing need for public transportation for first- and last-mile connectivity in the country. The market for this category is also driven by the rapidly increasing urban population in the country.

Rickshaws of 1,000–1,500 W motor power contributed the largest revenue to the Indian electric rickshaw market during the historical period, accounting for more than 50% in 2019. This can be ascribed to the optimum benefit–cost ratio offered by these vehicles. During the forecast period; however, the market is expected to witness the fastest growth in the category of electric rickshaws of motor power greater than 1,500 W, as the demand for rickshaws with higher speed and range continues to rise in the country.

Higher-Battery-Capacity Rickshaws to Witness Strong Demand in the Future

The unorganized category dominated the market during the historical period. The availability of low-cost electric rickshaws and their less complex powertrain, as well as the lack of a regulatory framework, has supported the growth of the unorganized, local players in the market.

Delhi was the largest market for electric rickshaws during the historical period. The sales of electric rickshaws have picked up here since 2013. In response to the increasing levels of air pollution in the capital, the Delhi government has also announced a subsidy of $413 (INR 30,000) on the purchase of electric rickshaws. This, in turn, has led to the proliferation in their demand in the city, further benefitting the market.

The Indian electric rickshaw market is growing rapidly, much of which can be attributed to the unorganized, local players operating in the industry. These unorganized players import vehicle components, such as motors, battery management systems, and axles, and assemble them locally. In view of the growing demand for these vehicles, especially for last-mile connectivity, established Indian and foreign original equipment manufacturers (OEMs) have also shown their interest in the market in recent years. OEMs are increasingly investing in affordable and efficient electric rickshaws, and known players of the automotive industry are making inroads in this market with the launch of new electric rickshaw models. More such players are likely to enter the market in the coming years, owing to their growing interest in the market and their capacity to invest in product development and distribution network expansion.

A major growth driver for the Indian electric rickshaw market is the increasing demand for low-cost transportation for first- and last-mile connectivity. Three-wheeler sharing service is seen as a viable economic and quick solution for daily commuters. Electric rickshaws cause zero tailpipe emissions and are widely used for first/last-mile connectivity in cities across the country. These three-wheeled electric-powered vehicles also help bridge public transport service gaps for commuters. The cost per head per kilometer (km) of an electric rickshaw service is $0.14 (INR 10). This is the fare in case the rickshaw is shared with other users. If the rickshaw travels for 5 km, then the fare is around $0.21 (INR 15). With an occupancy of four passengers, the driver earns around $1.70 (INR 120) to and from the destination. Thus, electric rickshaws can be viewed as the best low-cost shared mode of public transport for last-mile connectivity in the country.

India is the third largest carbon-emitting country in the world, accounting for around 6% of the global CO2 emissions from fuel combustion. According to a report published by IQAir in 2019, 21 of the world’s 30 most polluted cities are in India. Also, according to the 2018 World Health Organization (WHO) Global Air Pollution Database, 14 out of 20 most polluted cities of the world are in India. Thus, the Indian government is increasingly focusing on providing incentives in the form of subsidies and tax benefits in order to make high-priced electric rickshaws affordable and replace their conventional counterparts.

Furthermore, according to the Ministry of Road Transport and Highways (MoRTH), NITI Aayog, under the National Mission on Transformative Mobility and Battery Storage, has formulated an action plan to promote electric two-wheeler and three-wheeler vehicles and has proposed to ban all internal combustion (IC) engine-powered two-wheelers and three-wheelers in India, starting 2025 for two-wheelers and 2023 for three-wheelers. The increasing stringent emission norms and regulations as well as government initiatives are, thus, expected to boost the sales of electric rickshaws in the country in the near future. 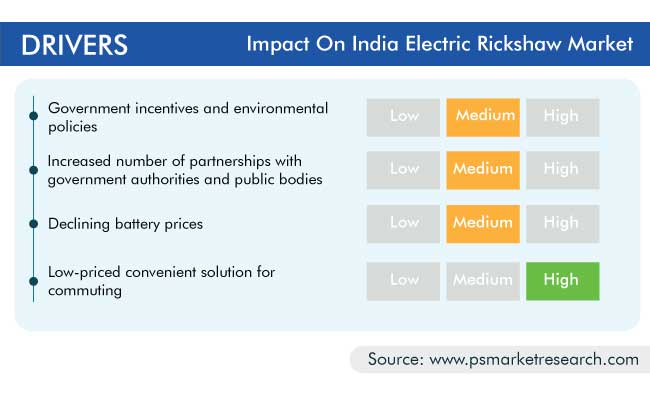 The Indian electric rickshaw market is primarily dominated by a large number of small and local players, which accounted for around two-thirds of the total sales in 2019. The market has boomed in the last couple of years, with few established players in the market. YC Electric Vehicle is the leader in the electric rickshaw market in India, with around 10% share in the organized sector. It is followed by Mahindra & Mahindra Limited, with around 5% share.

Based on Motor Power

Frequently Asked Questions About This Report
How much will the Indian electric rickshaw market revenue grow?+

Passenger carriers are the dominant vehicles in the Indian electric rickshaw industry.

Why has the unorganized sector held the larger share in the Indian electric rickshaw market till now?+

The larger share of unorganized players in the Indian electric rickshaw market is owed to the lack of a proper regulatory framework regarding these vehicles.

What are the opportunities in the Indian electric rickshaw industry for organized OEMs?+

Organized OEMs in the Indian electric rickshaw industry can look at the tightening government noose around unorganized OEMs and increasing demand for urban transportation as lucrative opportunities.

What is the nature of the Indian electric rickshaw market?+

The Indian electric rickshaw market is highly fragmented due to the dominance of a large number of small, local manufacturers.