The Indian e-rickshaw market size was at USD 273.6 million in 2022, and it is expected to reach USD 456.2 million in 2030, with a growth rate of 6.6% during 2022–2030. The major factors behind this are the government incentives and environmental policies, declining battery prices, and the fact that these vehicles are a low-priced, convenient solution for commuting. These vehicles serve as the backbone of the last-mile mobility and low-weight cargo/logistics ecosystems in the country presently. 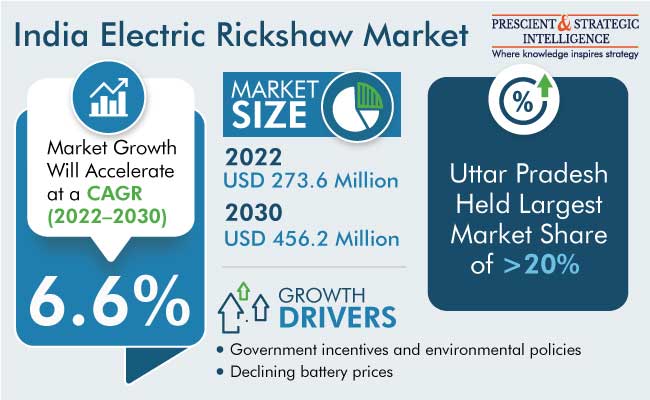 Moreover, electric three-wheelers help in mitigating air and noise pollution. At least 1,036.6 tons of CO2 emissions can be alleviated per day (378,357 tons of CO2 annually) if a CNG three-wheeler auto is substituted by an e-rickshaw. Moreover, the localization of lithium-ion battery production helps in encouraging people to buy lithium-ion-battery-based e-rickshaws. The current operation stock of lead–acid e-rickshaws, however, cannot be overlooked, and therefore, manufacturers are focusing on launching buyback schemes, under which the scientific disposal of lead–acid-battery-based e-rickshaws can be connected to discounts on the purchase of new lithium-ion-battery-based ones.

The increasing demand for e-rickshaws that charge with solar power is the new trend in the Indian e-rickshaw market. A normal battery e-three-wheeler uses the conventional form of electricity to charge its batteries. But, in a solar-powered variant, the batteries can be charged on the run on a sunny day. Additionally, these vehicles offer higher energy efficiency, while solar panels can raise their mileage by approximately 10% to 15%, with a lifecycle of 10 years. Such characteristics are propelling the traction for these vehicles for transportation purposes, and manufacturers, such as Inter IKEA Systems B.V. and Lohia Auto Industries, are launching such new products to earn a competitive advantage.

E-rickshaws with 1,000–1,500W motor power held the largest share in the market in 2022. A large number of e-rickshaws are equipped with 1,000–1,500W motors as they offer operational cost benefits. Companies are concentrating on leveraging their experience and knowledge in the production of automotive electrical parts and motors to diversify their production capacity and augment the supply of these motors over time. 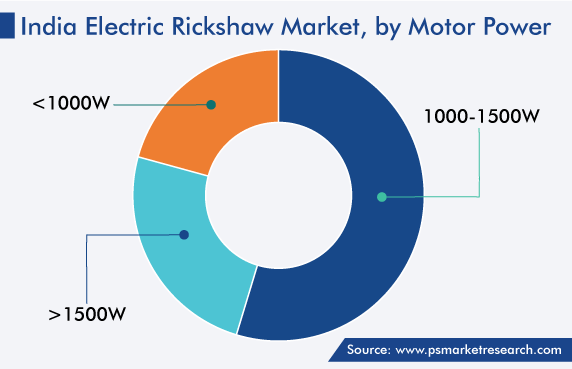 E-rickshaw with batteries of less-than-101Ah capacity held the largest share of the revenue, of 68%, in 2022. Moreover, since these variants cost less than those with higher-capacity batteries, this is expected to retain its dominance over the forecast period. Moreover, unorganized OEMs dominated the market in the initial period, and they majorly offer such cost-effective and low-battery-capacity variants.

However, during the forecast period, e-rickshaws with a more-than-101Ah battery capacity are expected to witness the faster growth in sales. This can be credited to the rising popularity of vehicles that can travel long distances without requiring frequent charging.

The organized sales channel will witness the higher CAGR, throughout this decade. With the proliferating significance of organized automakers who specialize in manufacturing and providing better-quality products with powerful motors, they are registering higher sales revenue.

As the Government of India (GOI) and state authorities regularize the use of e-rickshaws, there have been numerous public–private partnerships to drive the usage of these automobiles. For instance, in June 2017, the first e-rickshaw service of Delhi Metro Rail Corporation was formally flagged off at Vaishali station, in order to offer last-mile connectivity from and to metro stations. Moreover, by February 2020, the services, offered by SmartE, had been extended to a total of 17 stations, with over 800 such vehicles catering to approximately 100,000 commuters every day.

In 2022, Uttar Pradesh accounted for the largest share in the Indian e-rickshaw market, primarily due to the growing demand for these vehicles from tier-1 cities, tier-2 cities, and rural–urban fringes. Essentially, the expanding customer base is driving the use of these vehicles, thus propelling sales growth in the state.

In 2019, e-rickshaws were launched in 65 new tier-2 and tier-3 cities due to the high demand for them and customers’ requirements for last-mile connectivity. Apart from UP, other states, such as Bihar, West Bengal, and Assam, have a significant number of these vehicles. Further, Chhattisgarh, Tripura, Orissa, and other eastern states are among the fastest-growing markets in the country. 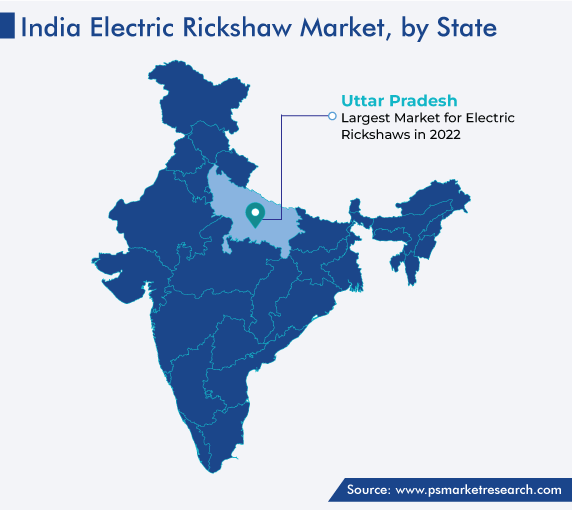 Based on Motor Power

Frequently Asked Questions About This Report
How much will the India electric rickshaw market revenue grow?+

What is the growth prospect for the organized sector in the India electric rickshaw market?+

Organized players in the electric rickshaw market of India have a much larger growth prospect than their unorganized counterparts.

Why is the India electric rickshaw industry growing?+

The India electric rickshaw industry is driven by the rising demand for first- and last-mile transportation and government support for EVs.

The electric rickshaw market of India is led by Uttar Pradesh.