The global HIV diagnosis market size stood at $4.13 billion in 2021, which is expected to reach $9.55 billion by 2030, advancing at a CAGR of 9.7% during 2021–2030. This is primarily due to the surging prevalence of AIDS, in part, due to the rising number of blood donations and transfusions all over the world. In addition, the advantages offered by point-of-care kits and instruments are expected to burgeon the domain growth during the forecast period.

The AIDS virus can spread through a compromised needle or transfusion of infected blood to a healthy individual. The increasing participation of government associations in educational programs has raised awareness regarding unsafe blood donations and blood transfusions globally. Some of the major associations involved in this include the WHO, International Federation of Red Cross and Red Crescent Societies, and American Red Cross. They support blood donation programs and encourage people to donate blood and blood components in a safe way.

The use of unsterilized needles during blood transfusion leads to a high risk of this infection, thus serving as a major driver for the growth of the sector. Current trends suggest that the growing awareness leading to the increasing volume of blood donations and blood transfusions is expected to contribute to the rising incidence of HIV infection which, in turn, will drive the growth of the domain. 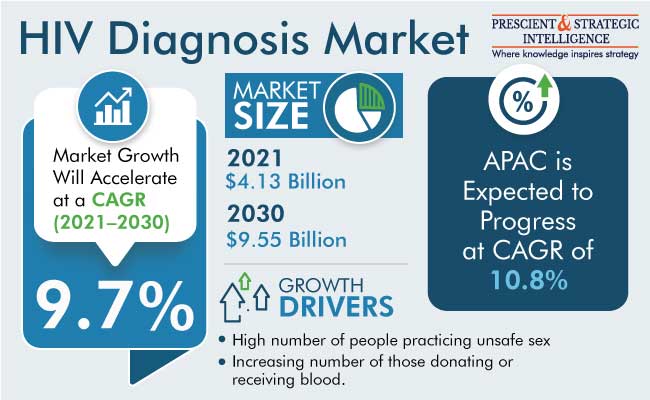 The healthcare expenditure has increased in various countries to alleviate the burden of AIDS over the past few years, especially in low- and middle-income. The rise in the healthcare spending across regions is thought to be related to the relative burden of the disease in that region, which in the case of Sub-Saharan African countries is significantly high. The overall spending on HIV-related activities has increased over the years, which, in turn, is expected to drive the growth of the sector.

In recent years, the USFDA has approved a few home-based diagnosis kits that can provide an HIV test result within 20 to 40 minutes, without needing to send the test sample to a laboratory. Such home-based diagnostic devices are rising in popularity in countries such as the U.S. and the U.K over the standard laboratory-use devices, since the former are more convenient to use and cost-effective and save time. A lot of people are reluctant to visit their physician or a healthcare facility to be tested for AIDS even if they have been engaging in behavior that would put them at a risk of being infected. One of the reasons for their reluctance is believed to be the social stigma around having HIV.

The availability of home-based tests is expected to help a lot more infected people become aware of their status, thereby helping alleviate the lives of patients. This also provides an opportunity for the players to further strengthen their current and potential markets, by launching low-cost and easy-to-use analytical devices that can be used at home by consumers themselves. Some of the home-based kits approved by the USFDA are the Home Access HIV-1 Test System and OraQuick In-Home HIV test.

The consumables category accounted for the largest HIV diagnosis market share, in 2021. This is mainly attributable to the increasing use of reagents, assays, and kits for laboratory as well as home-based analytical tests. In addition, consumables need to be procured continuously and repetitively by hospitals and labs. Furthermore, the surge in the number of initiatives taken by government organizations to combat the spread of AIDS is expected to drive the category during the forecast period. 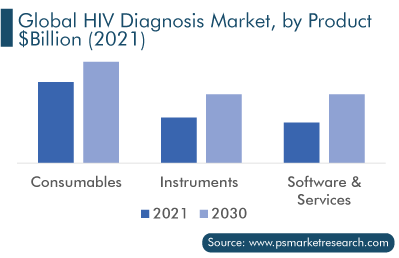 Based on type, the antibody test category garnered the largest market size in 2021, driven by the increasing number of approvals for new antibody tests with higher sensitivity and specificity by various regulatory authorities globally, including the USFDA. In addition, the surging pace of technological advancements and rising awareness regarding the disease are driving the demand for such tests. Further, the increasing adoption of these tests in countries such as Malaysia, India, Thailand, and China is fueling the category’s growth. Moreover, most recent antibody tests, including the confirmatory Western blot test, are considered over 99% precise.

The demand for solutions to diagnose HIV at diagnostic laboratories is expected to register the highest CAGR, of more than 10% in the forecast period. Diagnostic laboratories are one of the major end users of these analytical instruments and kits. In countries where people do not have access to portable analytical kits, such labs are the mainstay of the virus detection ecosystem.

Furthermore, the advent of new, portable devices for diagnosis has led to the increasing affordability of these products for diagnostic laboratories, which, in turn, is resulting in a greater number of people being diagnosed with the disease. These labs offer the advantage of the latest instruments, as well as skilled professionals who can perform various tests to screen and confirm the presence of the infection.

North America accounted for the largest HIV diagnosis market size, in 2021, driven by the high incidence of AIDS in the region and the rising awareness regarding it. In addition, the region is considered the hub for innovations in diagnostic procedures since a majority of the established and upcoming players are either headquartered or have a significant presence here. In addition, the region's growth is expected to be driven by the increasing funding from government bodies for HIV-related activities and rising number of people donating blood.

In the North American region, the U.S. holds the major share, mainly due to the favorable insurance coverage for AIDS testing in the country. In the U.S., AIDS testing that is deemed “medically necessary” is usually covered in insurance, which makes it easy and cost-effective for people to get tested.

Europe held the second-largest share, of more than 20%, in 2021, due to the presence of prominent HIV diagnosis product manufacturers, such as Siemens AG, Hoffman-La Roche Ltd., and Merck KGaA in the region. Additionally, the EU’s CE marking standards with respect to the basic design and engineering are comparatively less stringent than those of the FDA, thus offering favorable development opportunities to key players. Furthermore, the low antiretroviral therapy coverage is considered to be one of the factors driving the incidence of AIDS in the region. The increasing awareness of this disease in this region has helped bring down the social stigma and discrimination toward people living with HIV.

APAC is expected to register the highest CAGR, of around 10.8%, during the forecast period, driven by the expanding middle-class population with an increasing disposable income, low access to antiretroviral therapy, and rising support from the government of many countries in the region for AIDS diagnosis and management. The per capita income of many developing countries in this region, including India and Indonesia, has been on the rise in recent years, which is expected to fuel the demand for these products during the forecast period. 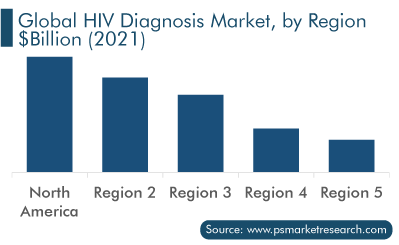 The research study offers a comprehensive market segmentation analysis along with revenue estimation for the period 2017-2030.

Based on Type of Test

Frequently Asked Questions About This Report
How much will the HIV diagnosis market value in the future?+

What kind of tests leads the HIV diagnosis industry?+

What are the key drivers for the HIV diagnosis market?+

The market for HIV diagnosis is driven by the high number of people practicing unsafe sex and the increasing number of those donating or receiving blood.

Which are the largest and fastest-growing regions in the HIV diagnosis industry?+

North America is the largest HIV diagnosis industry, followed by Europe; APAC is set to grow the fastest.

What are the HIV diagnosis market players doing for business growth?+

For a competitive advantage, players in the market for HIV diagnosis are launching home-use assay kits and instruments.