The global hematology testing market size stood at USD 3,987.4 million in 2022, which is expected to reach USD 6,335.9 million by 2030, advancing at a CAGR of 6.0% during 2022–2030. This can prominently be due to the rising prevalence of blood-related diseases and the surging adoption of high throughput hematology analyzers coupled with technological advancements.

In addition, the integration of flow cytometry with hematology analyzers also leads to high market demand. Over the past few years, flow cytometry has emerged as a significant tool in the in-vitro diagnosis of a broad range of clinical applications. As flow cytometry aids in the analysis of thousands of cells within a few seconds, it provides a significant speed advantage over other technologies.

Furthermore, the rising blood transfusions and donations and the surging adoption of telehealth also burgeon the industry growth. With the increasing number of blood transfusions worldwide, the risk of transmission of serious infections, including HIV and hepatitis, has been rising, which is expected to drive the demand for hematology testing in the coming few years. The burgeoning numbers of blood donors are aiding in the advancement of the market growth, as before the donated blood is transfused, it needs to be checked for infections and mutated genes, which propels the volume of hematology analyzers. The various strategies offered by government organizations are facilitating sufficient and timely supplies of safe blood and blood products to meet the transfusion needs of all patients; and the collection of blood, plasma, and other blood components from low-risk, regular, voluntary unpaid donors. Thus, the set regulations drive the hematology testing market positively.

In recent times, there has been a significant increase in the number of people suffering from hemoglobinopathies as well as thalassemia, which will lead to more people undergoing hematology testing, thereby leading to high industry growth. Furthermore, the increasing focus on the automation of hematology analyzers for the generation of reliable laboratory test results and the reduction in administrative errors, is burgeoning the market growth.

The consumables category generated a larger revenue share, of around 70%, in 2022, and it is also expected to witness a higher CAGR, of around 7%, in the forecast period. This is mainly due to the extensive use of a wide range of test kits and reagents to perform hematology testing, while catering to the requirements of end users. These consumables are considered to be the reoccurring revenue model in the market. The consumables are needed each time hematology testing is performed, building a directly proportional relationship between consumables and instruments.

With time, prominent players are coming up with innovations in consumables, especially reagents, which are driving the market growth in this category. In addition, the environmental concerns have also compelled key players to manufacture reagents that are environmentally compatible as well as in concentrated form. For instance, Sysmex Corporation develops concentrated reagents for hematology analyzers, which help in the reduction of the frequency of continuous reagent substitution for diagnostic purposes. Subsequently, the workload of lab technicians for handling multiple analyzers, at the same time, is also diminished. Also, the concentrated form occupies smaller space in laboratories, making it a preferable option for small clinics and clinical laboratories.

The overseas shifting of various consumable manufacturing units and their decentralization has led to the shortening of transportation distance, and the supply chain distribution of consumables has become more stable. One of the key players, Boule Diagnostics invested in the local production of its reagents in Russia, which has helped the company in converting the reagent packaging to smaller one having lighter weight, thereby reducing transport expenses and minimizing the generation of laboratory waste. 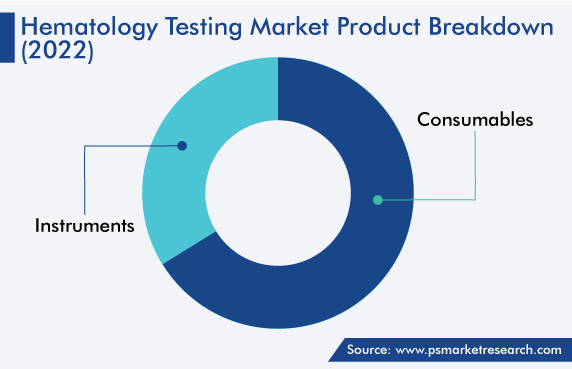 Amongst consumables, the reagents category held the largest market share of around 60% in 2022, and it is set to register the highest CAGR of around 5% during the forecast period. This is due to the surging number of laboratory tests, owing to the increasing incidence of chronic and infectious diseases. Also, the rising use of IVD testing in ongoing research activities and the surging IVD product launches will enhance the adoption of reagents, globally.

The routine hematology tests accounted for a larger hematology diagnostics market share, of around 70%, in 2022. Technological advancements have led to a better understanding of the relationship between routine tests and various disease indications. This has resulted in an increase in the number of routine tests performed for determining various health conditions. CBC is one of the most commonly performed routine tests worldwide. One of the primary reasons for the increasing number of CBC tests is their ease of use. Moreover, because of the automation and high throughput, the results are analyzed in minutes.

The hospitals category accounted for the largest revenue share, of around 45%, in 2022. This is on account of the increasing number of hospitals and high patient influx in hospitals in comparison to other diagnostic centers. Also, hospitals establish contracts with vendors to purchase analyzers and related consumables on a regular basis. In addition, the demand for hematology testing among patients is high, who are suffering from cancer and diabetes.

The availability of skilled healthcare professionals with knowledge and expertise in treating various acute and chronic diseases also draws the majority of patients to hospitals as opposed to other healthcare settings. As a result of the increase in the number of people suffering from various acute and chronic diseases, hospitals are being encouraged to equip advanced hematology analyzers, which is boosting the industry growth. In addition, the demand for hematology testing in hospitals is being driven by the surge in the aging population, digitalization in the healthcare industry, and the widescale adoption of healthcare insurance.

Moreover, the mounting demand for IVD tests will facilitate the market growth in this category in the coming years. The increasing usage of IVD tests is mainly due to their rapid and reliable results, easy repeatability, capability to confirm accurate results, smooth data recording ability, multiple tests performing capability, and ability to detect a wide range of substances in the body. For instance, China is creating a high demand for these tests in hospitals, due to the rising incidence of chronic diseases among the aging population, many of which can be diagnosed and monitored through hematology products. 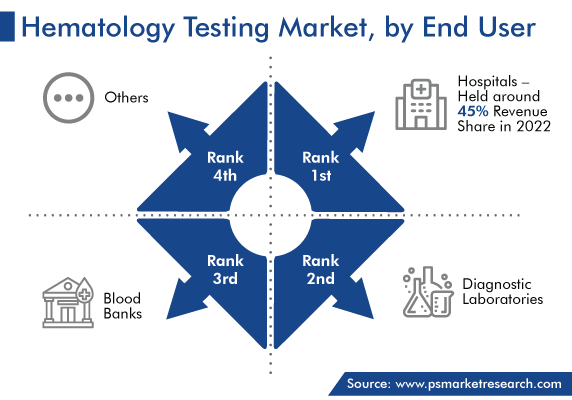 North America Is the Leader in Market

North America led the hematology diagnostics market in 2022, with a value of around USD 2 billion. This is primarily attributable to the growing prevalence of various types of blood diseases, favorable patient demographic, and reimbursement policies in the region. The demand is mainly surging across professional healthcare settings to treat the rising patient population in the U.S. and Canada. Furthermore, the surging prevalence of blood-related disorders, such as anemia, sickle cell disease, and thalassemia, are driving the need for hematology analyzers and consumables in the region.

North America is one of the major hematology analyzer replacement markets. Many laboratories and hospitals have semi-automatic or automatic hematology analyzers. In addition, the high healthcare expenditure, numerous R&D activities, and the strong presence of industry players are other factors intensifying the market growth.

However, the APAC market is expected to register the highest CAGR, of around 8%, in the forecast period. This can be ascribed to the rising cases of blood disorders, the surging number of blood camps, the increasing government investments, and the growing awareness regarding blood donation in the region. In APAC, China and India together hold more than 50% of the market share, propelled by the high adoption of flow cytometry in these countries.

The healthcare system in APAC is also experiencing a speedy transformation with favorable support from various government organizations. Furthermore, the increase in healthcare expenditure has contributed to improvements in healthcare infrastructure in the region. Healthcare providers are also focused on providing advanced care to patients, which is expected to boost the regional market growth during the forecast period.

Top Players in the Hematology Diagnostics Market Are:

This fully customizable report gives a detailed analysis of the market from 2017 to 2030, based on all the relevant segments and geographies.

Frequently Asked Questions About This Report
What was the size of the hematology testing market in 2022?+

What will be the growth rate of the hematology testing market during the forecast period?+

Which is the largest end user in the hematology testing market?+

Hospitals is the largest end user category in the hematology testing market.

What are the major drivers for the hematology testing market?+

The major drivers of the hematology testing market include the rising product launches, surging integration of flow cytometry with hematology analyzers, increasing blood transfusions & donations, and growing implementation of AI in hematology testing.