The global grow lights market size was $1,481 million in 2021, and this number is expected to increase to $13,183 million by 2030, advancing at a CAGR of 28% during the forecast period. This can be attributed to the increasing need for food owing to the growing population, rising disposable income, growing preference for new and advanced farming practices, rapid urbanization, and technological advancements in the agriculture sector.

Furthermore, the various government measures to support LEDs, greenhouses, and vertical & indoor farming will propel the industry growth in the coming years. 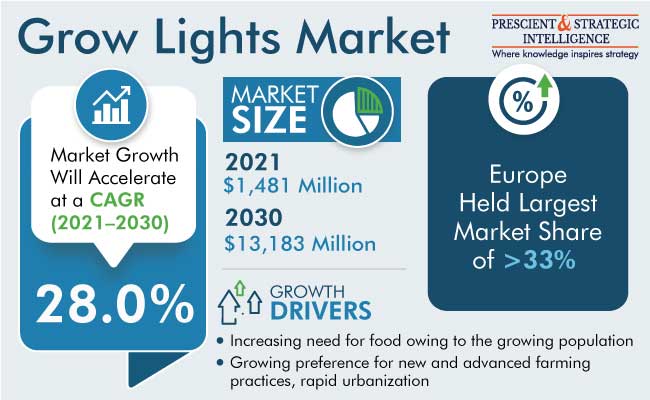 The LED category to dominate the market in the projection period. This can be ascribed to the rise in the customer demand for affordable and energy-efficient grow lights and the surge in the number of government programs to promote the usage of LED drivers and lights, globally. Moreover, the increasing demand for more-durable and economical horticulture lights in various countries and the rising usage of such lights in new farming practices owing to their cost-effectiveness and appropriate intensity for plant growth are resulting in the high product demand.

Additionally, the HID category will also register stable growth during this decade. This can be attributed to the growing usage of such lights in commercial greenhouse, horticulture, and vertical and indoor farming applications and the wide usage of metal–halide (MH) lamps and high-pressure sodium (HPS) lamps for plants requiring high amounts of direct sunlight, which propels the segment growth across the globe in the coming years.

The retrofit category accounted for the larger revenue share in 2021, and it is further expected to maintain its dominance during the forecast period. This is due to the growing number of new advanced farming facilities across the globe and the mounting usage of such lights in existing farming facilities owing to their decreasing prices. In addition, the demand for retrofit installations is usually greater than the new ones on account of the fact that the latter requires lots of time and a huge capital investment.

The need for more-economical grow light technologies in cities is a key driving factor for the global grow lights market. The cost of producing food is high, which is why the demand for cheaper food production is increasing exponentially in urban areas. Furthermore, the availability of cultivable land around the cities is already limited. This leads to the increasing demand for new urban farming initiatives that are more economical and energy-efficient. The cost of grow lights plays a major role in the calculation of the overall cost of urban farming projects. Due to the recent price decline and easy availability of grow lights for local indoor farms, city inhabitants have started purchasing them for producing fresh, nutritious vegetables and fruits themselves, without bearing any charges for buying the crops. Furthermore, the smart city project and the trend of LED adoption for a variety of applications, including urban farming, are factors that boost market demand.

Vertical farming will witness the fastest growth during the projection period, with a CAGR of around 29.8%. This growth can be ascribed to the booming need for food, and herbs, which can be cultivated in vertically stacked layers; and the surging number of such farms, especially in developed nations, due to the lack of space needed to set up conventional farms.

The commercial greenhouses category held the largest revenue share in 2021, and it is expected to dominate the market in this decade. This is due to the rising commercialization of greenhouses, growing need for food across the globe owing to the rise in the population, decreasing availability of agricultural land, rising adoption of organic cultivation techniques, and increasing need for higher energy efficiency in agriculture. 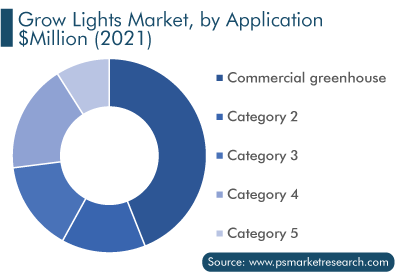 Europe accounted for the largest revenue share, of around 33%, in 2021, and it is further expected to maintain its dominance during the forecast period. This can be attributed to the significant usage of LED lights to grow plants inside commercial greenhouses and a large consumer base.

Additionally, the technological developments in artificial grow lights have led governments in the European region to favor efficient and eco-friendly technologies, such as LEDs. Moreover, administrations have implemented rigorous resolutions to ban the use of incandescent bulbs, which further boosts the market share of LEDs.

APAC will register the fastest growth during this decade. This can be ascribed to the rising urbanization rate, ballooning need for food, surging population, growing adoption of new agricultural technologies, and strengthening focus on urban farming. Furthermore, 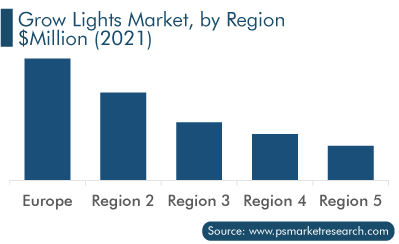 Frequently Asked Questions About This Report
Which are the factors that drive the grow lights market growth?+

The market for grow lights is driven by the expanding practice of indoor farming and declining prices of associated technologies.

How big is the grow lights industry?+

What will be the value of the grow lights market in 2030?+

Which is the leading technology in the grow lights industry?+

LED is the dominant technology in the grow lights industry.

Which countries are the most significant in the grow lights market?+

The key countries in the market for grow lights are the U.S., Germany, Italy, the U.K., India, Japan, South Korea, and China.