The global green ammonia market size was $16.4 million in 2021, and it will grow at a CAGR of 94.6% during 2021–2030, to reach $6,559.1 million by 2030. This is credited to the several industrial projects for the production of this chemical that are currently underway in Oceania, Mauritania, and Oman. The 15-metric-ton capacity of the announced projects, which is targeted to be achieved by 2030, is around 8% of the current ammonia production across 54 projects. Essentially, the stringent emissions regulations and zero-emission goals are propelling the production of NH3 via clean methods. 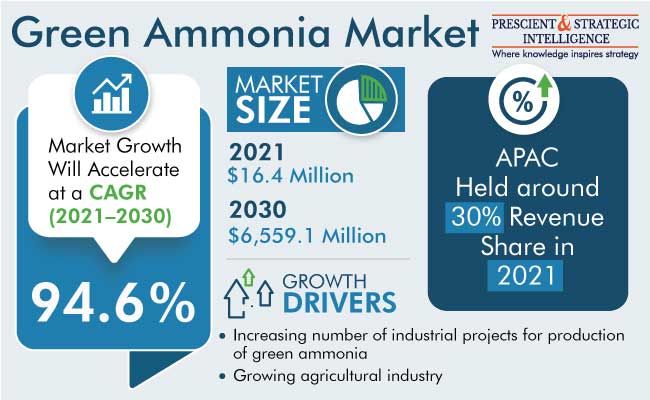 On the basis of production, the AWE category will account for the highest share, of 97.5%, in 2021. This will primarily be due to the increase in the number of green hydrogen projects in many countries, such as Australia, China, and Germany, which are focusing on investing in the development of a hydrogen-based economy.

In turn, the investments in hydrogen infrastructure will subsequently bring opportunities for green ammonia production through this technology, which is traditional, cost-effective, and mature. There are various industrial plants that use this method for the manufacturing of this chemical. For instance, CF Industries Holdings Inc. has signed a contract with ThyssenKrupp AG to deliver a 20MW AWE plant for the manufacturing of hydrogen in Louisiana, U.S. 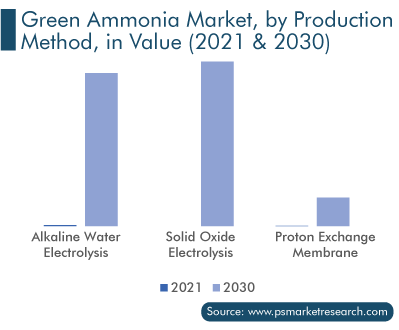 APAC is Expected to Grow at a Fastest CAGR

APAC accounted for a market size of around $5.18 million in 2021, which is expected to exhibit a lucrative CAGR, of 102.8%, to reach $3,008.70 million by 2030. This is primarily attributed to governments’ stringent regulations and the UN commitment to ensure zero emissions by 2050. Wind and solar energy are taking center stage for carrying out AWE, in response to the strict emission laws and ambitious zero-carbon goals.

The green ammonia market demand will be driven by how rapidly the cost of producing this chemical can be reduced. Pilot uses will be more frequent in the near future due to the awareness regarding zero emissions. The EU, North America, and APAC have set priorities, since their major economies have agreed to the legally binding target of net zero by 2050.
Furthermore, there is also a growing understanding that long-term sustainable energy storage and the appropriate green ammonia usage in producing agricultural fertilizers, electricity, and other products do not harm the environment, which eventually drives the market trend.

Moreover, in the APAC region, Australia will account for the fastest growth during the forecast period, due to the increasing government investment in building its green hydrogen economy. As per data, various green ammonia plants are under construction with an expected combined capacity of 20,000–60,000 tons per year (tpy), including Dyno Nobel (Moranbah, Australia), Yara (Pilbara, Australia), Enaex (Antofagasta, Chile), and Proton Ventures/Siemens/Yara (New Zealand).

Japan accounts for the second-fastest growth, which is because of the Japanese government’s commitment to carbon neutrality by 2050. In order to reach the target, the country is planning to import huge volumes of hydrogen and ammonia, to focus on reducing its greenhouse emissions, and developing manufacturing capabilities in Japan. 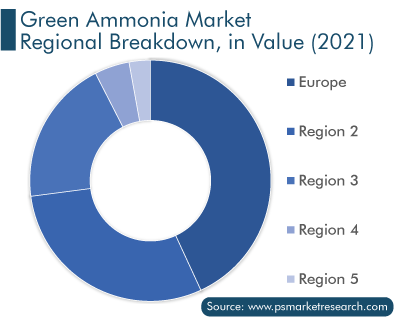 Ammonia is widely used as a feedstock for inorganic, nitrogen-containing fertilizers; therefore, this category dominates the market, with around 53.7% shares in 2021. Green ammonia usage for manufacturing fertilizers is considered an important part of the decarbonization strategy, and it has been adopted by various countries to reduce greenhouse gases. This method can lead to 100% carbon reduction, which helps in the attainment of the eco-friendly goals.

The market growth of traditionally generated ammonia in recent years has been aided by the high product penetration in the agricultural sector and ample product availability as a feedstock for fertilizer manufacturing. More than 70% of the 170 million metric tons of ammonia produced globally, according to Thyssenkrupp AG, is used to make fertilizers.

However, employing a lot of traditionally produced ammonia in agriculture poses long-term risks to the terrestrial ecology, through the emission of greenhouse gases. Furthermore, the demand for carbon-neutral fertilizers was sparked by the rising environmental concerns, combined with the implementation of decarbonization targets in various nations, which is intensifying the green ammonia market growth.

Thus, clean ammonia is both a viable fuel and a more-environment-friendly raw material for fertilizers. High-potential renewable sources, such as solar and wind, are expected to rule the market for renewable energy in the next many years.

The market is consolidated with the presence of major players. In recent years, they have been involved in partnerships, acquisitions, and product innovations, in order to stay ahead of their competitors.

Based on Production Method

Frequently Asked Questions About This Report
What is the current size of global green ammonia market?+

How big is the green ammonia industry growth potential?+

What is the most-popular production method in the green ammonia market?+

Alkaline-water electrolysis is the key production method in the market for green ammonia.

How are government efforts influencing the green ammonia industry?+

The government efforts to achieve net zero targets by 2050 are a major driver for the green ammonia industry.

What is the nature of the green ammonia market?+

The nature of the market for green ammonia is consolidated.