The global graphite market was valued at $19,092.9 million in 2019, and it is projected to witness a CAGR of 7.4% during the forecast period (2020–2030). This is primarily attributed to the growing demand for graphite products in the metallurgy and electronics industries across the globe. Furthermore, graphite is widely consumed during the production of lithium-ion (Li-ion) batteries, which is likely to pave the way for the adoption of graphite in the automotive industry, which, in turn, will boost the global graphite industry.

Owing to the lockdown in various countries, the operations of various industries, including metallurgy and automotive, were temporarily halted or reduced, in order to curtail the spread of the disease. Since graphite is widely used in the production of various crucial components of automobiles and industrial machinery, the market for this material has been negatively affected by the pandemic. 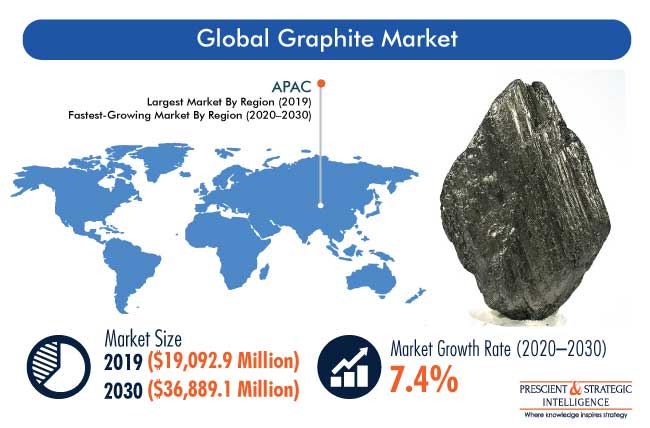 In 2019, the synthetic graphite category accounted for the larger size in the market for graphite, on the basis of type. This is ascribed to the widescale usage of synthetic graphite in the manufacturing of electrodes for electric arc furnaces, which are used to manufacture metallic products. Furthermore, synthetic graphite has the ability to withstand high temperature, and it exhibits superior thermal expansion and thermal shock resistance.

The synthetic graphite category is sub-categorized into graphite electrode, carbon fiber, and others, on the basis of form. Amongst them, graphite electrode held the largest market share in 2019 owing to the rising production of iron and steel in emerging countries, especially China and India, and rising availability of steel scrap in China. This further increases the usage of electric arc furnaces, where graphite electrodes are highly important, thereby propelling the market for graphite.

Batteries Expected To Be Fastest-Growing, Owing To Expanding Production of Hybrid and Electric Vehicles

The batteries category, based on application, is projected to witness the fastest growth in the graphite market during the forecast period. This is attributed to the rapidly expanding production of hybrid and electric vehicles, particularly in North America and Europe. In developing countries, the improving disposable income and consumer spending are expected to support the sales of high-drain electronics, which, in turn, will boost the demand for batteries containing graphite.

Historically (2014–2019), the metallurgy classification held the largest share in the end-use industry segment. This is ascribed to the growing demand for the ferrous and non-ferrous products used to manufacture industrial machinery, automobile components, and electronic devices. Furthermore, the significant growth in the electric vehicle industry is responsible for driving the metallurgy end-use industry category in the graphite market.

During the historical period, APAC held the largest market share owing to the expanding manufacturing industry in this region. Further, the growing investments in the electric vehicle industry are expected to raise the demand for graphite in the coming years. Moreover, this region is also expected to be the fastest-growing market for graphite during the forecast period. This is attributed to the high-volume integration and production of graphite electrodes in emerging economies, such as China and India.

China held the largest graphite market share in the APAC region in 2019 on account of the rising production of crude steel, which witnesses a high demand from various sectors for producing ferrous and non-ferrous metallic products. Additionally, the increasing share of electric-arc-furnace-based steel production in the country is boosting the demand for graphite. 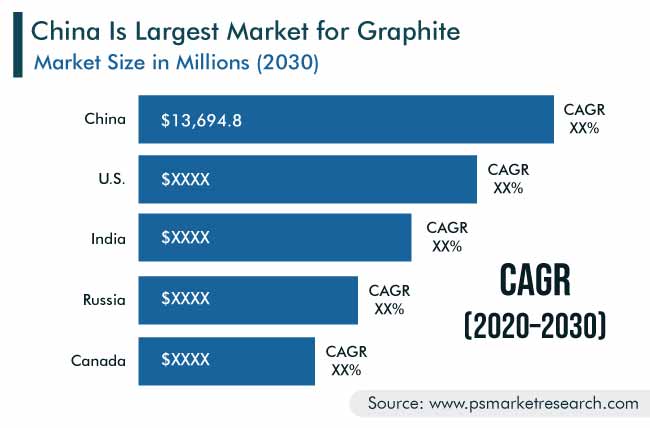 The most-prominent trend being observed in the graphite market is the usage of pebble-bed reactors, over conventional reactors, for producing electric power using uranium fuel. It is estimated that around 3,000 tons of graphite are needed to run a 1,000-MW pebble-bed nuclear reactor in the initial phase, while the annual requirement for graphite is around 600–1,000 tons. In addition, instead of water, helium gas is used to cool the spherical fuel elements of pebble-bed reactors.

According to the World Steel Association, the global production of crude steel stood at 1,869 million tons in 2019, against 1,814 million tons in 2018. The rise in the production of steel is due to the growing demand for steel products in various end-use industries, including oil & gas, automotive, construction, and residential (household use). Owing to its beneficial properties such as high corrosion resistance, durability, and strength at extreme temperatures, graphite is consumed in huge quantities during steel manufacturing.

In recent years, players in the industry have merged with and acquired other players in order to stay ahead of their competitors. For instance: 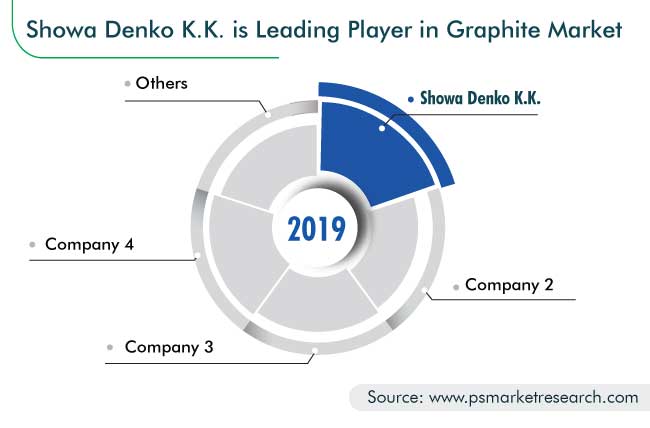 Some Key players in Graphite Market Are:

Frequently Asked Questions About This Report
What is the growth forecast for the graphite market?+

Which is the larger category under the type segment of the graphite industry?+

Synthetic is the larger category within the type segment of the graphite industry.

Where does the highest revenue for graphite market players come from?+

Which application can offer lucrative opportunities to the graphite industry?+

Pebble-bed nuclear reactors could be a potentially lucrative application in the graphite industry.

Who is the largest graphite market player?+

Showa Denko K.K. is the largest player in the graphite market.