The global fuel cell market size was about $1,799.9 million in 2021, and it is expected to advance at a CAGR of 33.2% during 2021–2030. Major factors driving the industry include the stimulus packages and economic benefits to boost green technology infrastructure, rising carbon emissions from power stations and industries, and low total cost of ownership of hydrogen fuel cell vehicles. Benefits of the fuel cell technology include low-to-zero emissions, high efficiency, reliability, fuel flexibility, energy security, durability, scalability, and quiet operation. 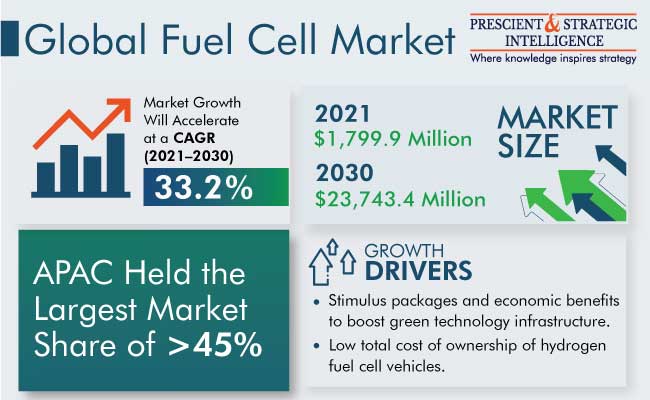 Moreover, many OEMs are making high investments in this technology. PEM fuel cells are used primarily for transportation applications and some stationary applications. Due to their low start-up time and favorable power-to-weight ratio, they are particularly suitable for cars and buses. 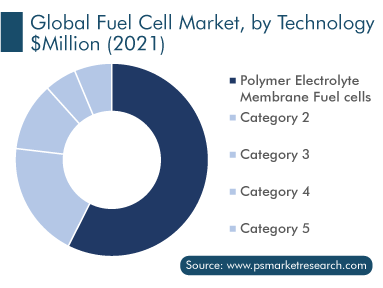 The demand for the fuel cell technology in the transportation sector is expected to observe a CAGR of 33.6% during the forecast period. Transportation consumes about a quarter of the world's total energy. In the case of ICEs, a large part of the fuel energy is emitted as heat, due to friction loss and exhaust creation. The fuel cell technology is an alternative to Li-ion batteries and conventional ICEs.

Moreover, the transportation industry is responsible for about 17% of the global greenhouse gas emissions every year, so important changes are expected from this sector in order to reach the aims of the Kyoto Protocol. The industry’s outlook is to invest in technologies that would offer both significant reductions in harmful emissions and better energy conversion efficiencies, for which PEM FC is the best available technology. 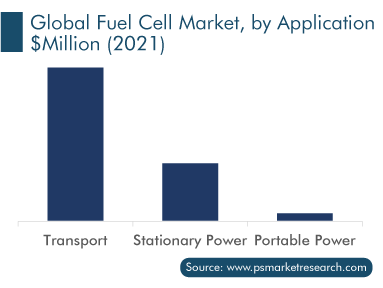 The fuel cell market growth rate is expected to surge in the coming years as many countries are investing in hydrogen technologies, along with the increasing number of sectors they target, such as stationary power generation.

The stationary sector includes fuel cell systems that operate at a fixed location for primary power, backup power, or both. Fuel cells are being developed for both large-scale (100 kW and up) and small-scale (up to 100 kW) applications, such as retail operations, data centers, residences, telecommunication towers and base stations, and utilities.

In 2021, more than 750 MW fuel cell capacity was installed in the U.S. itself. Moreover, South Korea completed some of the world’s largest installations, with several multi-MW fuel cell power parks installed at major utilities and approximately 300 MW of total systems deployed. Japan and Europe have a handful of larger systems, as they are mainly focused on small-scale fuel cell systems for homes and businesses.

In the U.S., small-scale fuel cell systems are primarily used for backup power by telecommunications entities, railroads, utilities, governments, and traffic/emergency systems. To reinforce the role such equipment can play in reducing the carbon emissions from residential and commercial buildings in Europe, a Joint Declaration on Stationary Fuel Cells for Green Buildings was signed in November by key stakeholders.

To Increase Market Share, Companies Involved in Partnerships and Collaborations

Players in the global fuel cell market have been involved in collaborations and partnerships to remain competitive. For instance

The research offers market size of the global fuel cell market for the period 2017–2030.

Frequently Asked Questions About This Report
How big is the fuel cell market?+

Do fuel cells have a future?+

Yes, the usage of fuel cells is being extensively explored for automobiles and low-carbon energy generation for a range of applications.

Which markets are fuel cells making the biggest impact in?+

Currently, the U.S. and South Korea are two of the biggest fuel cell markets.

What is the preferred technology in fuel cells?+

What is the most-lucrative application in fuel cell industry?+

The biggest potential for fuel cells is in transportation, with France, South Korea, and the Netherlands targeting 2,000; 30,000; and 3,000 operational fuel cell electric trucks, respectively in the next 20 years.