The global fuel cell electric vehicle market was valued at ~$3 billion in 2020. The major influencers for the growth of the market are the strict norms for carbon emissions, increasing adoption of electric vehicles in emerging economies, longer drive range offered by these vehicles, and growing need for better fuel efficiency.

The market has been negatively impacted by the epidemic of COVID-19. With lockdowns implemented globally, manufacturing facilities were shut down. The effects were observable in the crude prices as well, which went historically low, into negatives. Thus, the high prices of FCEVs, along with the low prices of crude oil, discouraged people from adopting FCEVs. 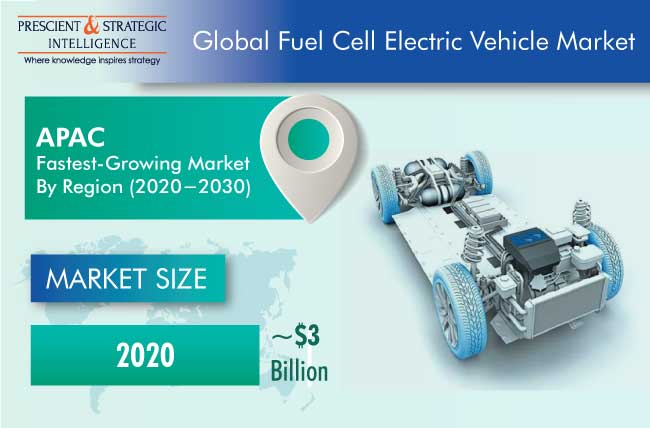 Due to Stringent Norms to Curb Vehicular Pollution, Passenger Vehicle Category Accounted for Larger Share in 2020

The passenger vehicle category held the larger share in the fuel cell electric vehicle market in 2020, on the basis of vehicle type. This can be attributed to the rising per capita income in the developing markets, high demand for clean personal mobility, and stringent government norms to curb vehicular pollution. Moreover, many countries are planning the conversion of taxi and cab fleets into FCEVs. For instance, South Korea is targeting to deploy approximately 120,000 fuel cell vehicles by the end of 2040.

The short category is projected to witness the faster growth in the market during the forecasted period, based on range. This can be attributed to the rising demand for low-emission vehicles for short-distance travel or commuting. Moreover, such vehicles are being increasingly used across diverse applications, including transportation of goods within ports and airports and by e-commerce companies to reduce their carbon footprint, which renders a positive market outlook.

The presence of stringent government regulations is one of the main factors responsible for the fastest growth of the Asia-Pacific (APAC) market for fuel cell electric vehicle, globally. In addition, the major countries in the region have been investing heavily for the development of hydrogen fuel cell vehicles. Toyota Motor Corporation and Hyundai Motor Company offer fuel cell passenger cars, buses, and logistical vehicles in the region. 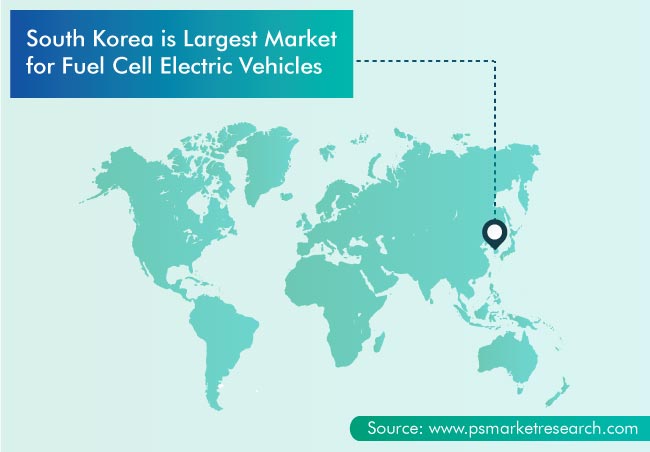 Technological Advancements for Improved Range and Efficiency Are Major Trends

Fuel cell vehicles have gained popularity in recent years as a result of their improved performance, shorter refueling time, and longer range. Other than these advantages and reduced emissions, the technology results in superior power and higher torque. ​Furthermore, a fuel cell vehicle has a driving range of 300 to 380 miles. Moreover, recent catalyst developments are key for the future of the fuel cell technology, as they will improve durability through innovative catalyst layer designs. Thus, the continuous technological advancements in the fuel cell technology can be viewed as a major trend in the market for fuel cell electric vehicle. 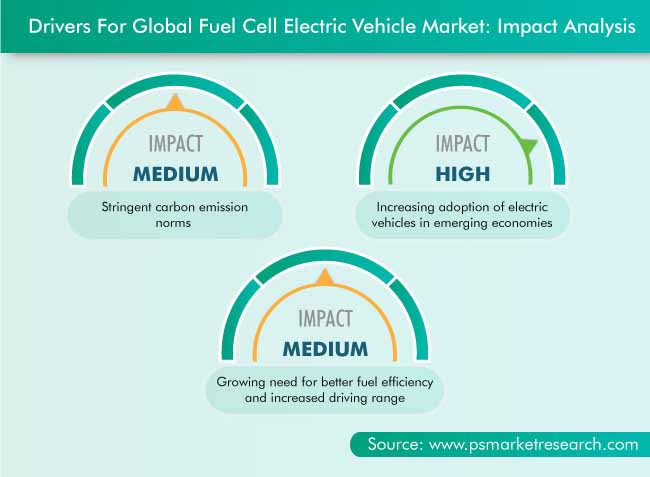 Stringent carbon emission regulations, including those with respect to fuel efficiency, implemented at the international and country levels continue to drive the growth of the fuel cell electric vehicle market. The mounting concerns over carbon dioxide emissions globally are leading to the reducing demand for conventional vehicles, ultimately benefiting the market for fuel cell electric vehicle. For instance, the U.S. Environmental Protection Agency (EPA) emphasizes the usage of FCEVs to reduce carbon dioxide emissions. Furthermore, the European Union is dedicated to reducing vehicular emissions by 80% by the year 2050 from the 1990 levels, by promoting the adoption of green vehicles.

Market Players Are Involved in Collaborations and Partnerships

The key strategies adopted by the manufacturers of FCEVs are partnerships and collaborations with other automobile original equipment manufacturers (OEMs).

Frequently Asked Questions About This Report
What are the major growth drivers of the global fuel cell electric vehicle market?+

Why will the fuel cell electric vehicle market register the fastest growth in Asia-Pacific (APAC) during 2021–2030?+

Due to the enactment of strict government regulations, the fuel cell electric vehicle industry will exhibit the fastest growth in APAC during 2021–2030.

In which country is the fuel cell electric vehicle industry booming?+

What are the key strategies adopted by the fuel cell electric vehicle industry players?+

The players in the market for fuel cell electric vehicles are focusing on partnerships and collaborations.

What has been the impact of the COVID-19 pandemic on the market for fuel cell electric vehicles?+

The COVID-19 pandemic has hampered the progress of the market for fuel cell electric vehicles.