At the end of 2019, the market for floating solar panels generated $685.2 million, which is expected to reach $2,301.8 million by 2026. The increasing concerns regarding the usage of fossil fuels for generating power, along with the continuously increasing energy demand, are some of the key factors which drive the floating solar panels market. Moreover, the increasing investments by companies in research and development (R&D), which have led to a lower cost of solar panels, and government support, in the form of various schemes, are also propelling the industry growth.

Due to COVID-19, the global economy is going through a rough phase. The ongoing pandemic has disrupted the complete value chain of manufactured products, including floating solar panels. With the shutting down of commercial and industrial establishments, in order to curtail the spread of the disease, there was a temporary halt in the production of solar panels during the first quarter of 2020. However, it is expected that with the lifting of the lockdowns and economies coming back to normalcy, projects, which could not be completed in 2020, will regain pace and be completed by late 2021. 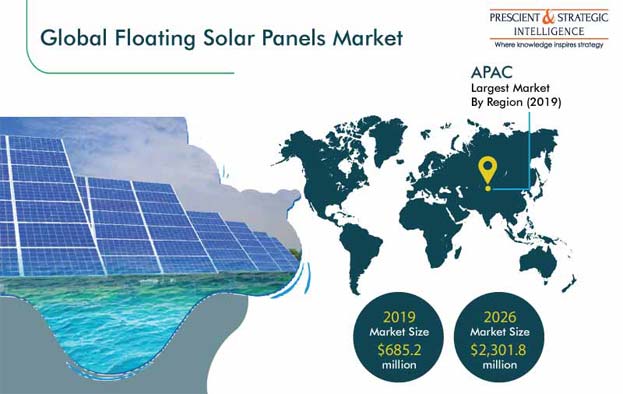 Onshore Installations Would Retain Their Dominance during Foreseeable Future

Based on location, the floating solar panels market is bifurcated into onshore and offshore. The onshore category accounted for the larger share in 2019, and it is likely to continue its dominance in the near future. The forceful water currents and high tides in deep water result in damage to solar panels and their floating structure. Further, construction and maintenance costs are also higher for plants deployed in deep seawaters as compared to shallow waters. Owing to such factors, the demand for onshore floating solar panels installation is expected to witness higher growth.

The APAC region held the largest share in the floating solar panels market in 2019, and the trend is likely to continue in the forecast period. The region is expected to showcase robust growth, primarily on account of the government initiatives promoting the usage of solar panels in the region. Further, the stringent environmental regulations, requirement for land for alternative purposes, and rising low-cost energy demand are promoting the growth of the floating solar panels market in APAC.

In addition, ground-based solar systems require large landmasses; hence, land acquisition for solar power stations increases the cost of solar power. The available land in most Asian countries is quite less, owing to their high population densities. Hence, it is expected that with a high focus on reducing the dependency on land-based solar panels for generating power, the floating solar panels market would advance at a rapid rate during the forecast period. 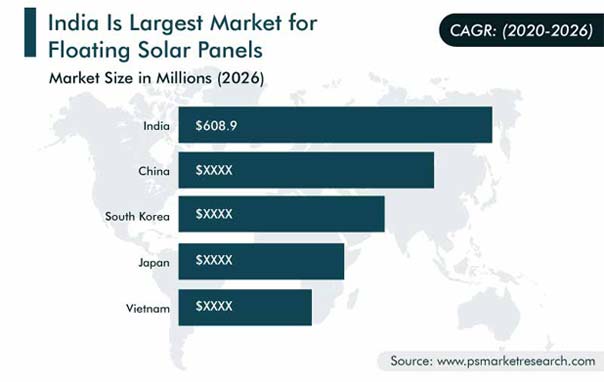 The prominent trend identified in the floating solar panels market is the increasing investment by manufacturing companies to make the technology more efficient. In addition, governments across the globe are investing in this technology, as floating solar panels require no land, resulting in cost savings. For instance, in 2019, the Uttar Pradesh government in India announced that it has approved a floating solar power project with a capacity of 150 Megawatts (MW), to be completed in the next 21 months.

In addition, Vietnam’s 475 MW project, South Korea’s 2.1 gigawatt (GW) project, and several other projects are expected to start operations in the next 3 to 4 years.

No Need for Acquisition of Large Land Areas

The burgeoning population and reducing land are key areas of concern around the globe. Further, the deployment of technologies such as ground-based solar power plants, which require huge areas in order to generate a large amount of power, are leading to a reduction in the available land. Therefore, in order to overcome this challenge, in recent times, several countries have adopted floating solar panels, which eliminate the requirement for land acquisition. In addition to eliminating the costs associated with the acquisition of land, floating solar panels are characterized by a low lease price, thereby driving the growth of the global floating solar panels market at a significant rate.

The increasing adoption of renewable energy across the world, in order to reduce the dependency on conventional fossil fuels, is driving the floating solar panels market. Further, several countries have initiated or are in the process of initiating projects and schemes, along with implementing several environmental regulations, to promote the use of renewable energy, thus propelling the industry growth.

Several countries, such as Japan, the U.S., the U.K., France, Australia, India, and Brazil, have started taking initiatives to develop floating solar power plants. For instance, in 2018, India announced its plans to create 10 GW of floating solar capacity; several other countries are following the trend, which is why floating solar power is expected to have a significant share in the total energy mix of the world during the forecast period.

Companies Are Using Clients Wins to Solidify Their Presence in Market

The players operating in the floating solar panels industry have invested a large capital in R&D, since the technology is new, compared to ground-based solar panels. Therefore, companies are focusing on capturing new clients, in order to generate higher profit and, as a result, increase their market share. For instance: 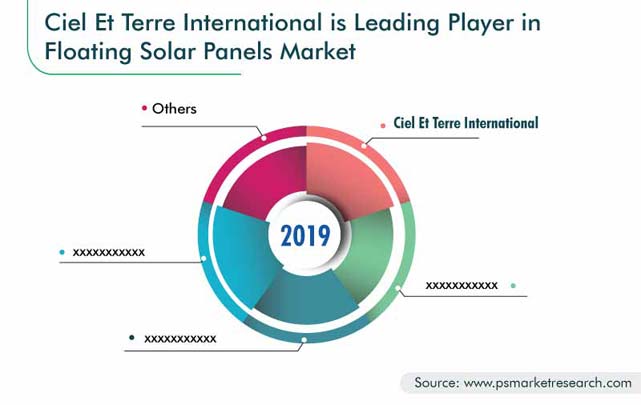 Some Key Players in Floating Solar Panels Market Are: