The global flame retardants market size was $7,565.1 million in 2021. This number is expected to increase to $12,028.4 million by 2030, advancing at a CAGR of 5.3% during 2021–2030. This can be ascribed to the technological advancements, increasing R&D activities, and growing end-use industries. Moreover, the increasing stringency of the regulations on fire safety in different countries propels the market growth. 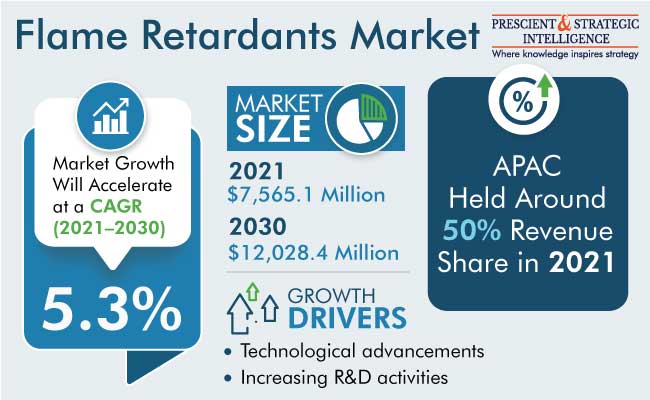 Non-halogenated flame retardants accounted for the larger revenue share in the market in 2021, and this category is further expected to grow with a CAGR of over 5% during the forecast period. This will be because these chemicals exhibit exceptional flame retardancy, smoke suppression, and thermodynamic characteristics, which make them suitable for anti-fire applications in numerous industries. Moreover, these chemicals are gaining popularity because of the environmental initiatives taken by several governments to decrease the usage of halogenated compounds, which have adverse effects on humans, including dyspnea, airway obstruction, hypoxemia, pneumonitis, acute respiratory distress syndrome (ARDS), and pulmonary edema, as well as surface ozone formation, which degrades the air quality.

Moreover, the phosphorus-based non-halogenated subcategory will have the fastest growth in the flame retardants market during the forecast period, primarily due to the thermal stability and non-toxic nature of these materials. Additionally, the growing concerns over the usage of harmful halogenated chemicals have led to the development of several aromatic phosphates.

The increasing stringency of fire safety standards and regulations across the world are expected to escalate the demand for flame retardants. For instance, in England and Wales, general fire safety is governed by the Regulatory Reform (Fire Safety) Order 2005. In Scotland, the requirements for general fire safety are covered in Part 3 of the Fire (Scotland) Act 2005, supplemented by the Fire Safety (Scotland) Regulations 2006.

Moreover, manufacturers are developing a wide range of halogen-free chemicals to abide by the environmental norms and fulfill the demand for non-toxic chemicals.

Building & Construction Industry Is Largest User of Such Products

The building & construction industry held the largest revenue share, of approximately 40%, in 2021 in the market. The growing infrastructure activities in developing nations, such as China and India, drive the demand for these chemicals.

For instance, infrastructure activities in APAC are driven by numerous government initiatives, such as the Pradhan Mantri Awas Yojana and Smart City Mission in India and the Belt and Road Initiative of China. Moreover, the rising awareness regarding the importance of fire safety propels the flame retardants market growth. 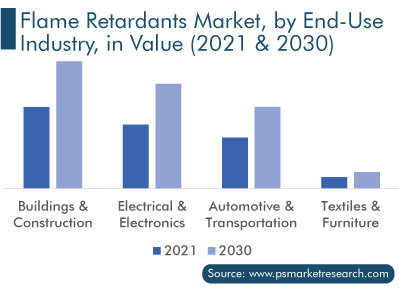 The electrical & electronics industry is expected to witness the highest CAGR, of approximately 6%, in the market over the forecast period. This growth can be ascribed to the increasing use of plastics in the production of electronic components and increasing consumption of insulation on products, for consumer safety and fire risk reduction, which is itself a result of the strong need of manufacturers to comply with fire safety regulations. Moreover, flame retardants have a wide application base in the electrical & electronics industry to offer increased resistance to internal and external heat sources, especially to electrical cables and wires.

The APAC flame retardants market accounted for the largest share, of around 50%, in 2021, and it is further expected to contribute the highest revenue to the market during the forecast period. This can be ascribed to the rapidly growing manufacturing sector and infrastructure development activities in the region. Furthermore, APAC is the biggest producer of electronics in the world, accounting for 70–75% of the global output. South Korea, Japan, and China manufacture a wide range of electrical components and supply them to various industries globally.

Moreover, China held the major revenue share in 2021 in the APAC market, as it is the largest manufacturing base for electrical & electronic equipment. Additionally, the significant developments in the residential and commercial construction sectors and growth in the transportation & automotive industry in the country have been propelling the consumption of materials that do not catch fire.

Europe is the second-highest revenue contributor to the global market, attributed to the large automotive & transportation and textile industries in the region. Additionally, countries such as Germany and the U.K. spend huge capital on the construction sector, which helps the market grow with a healthy pace. 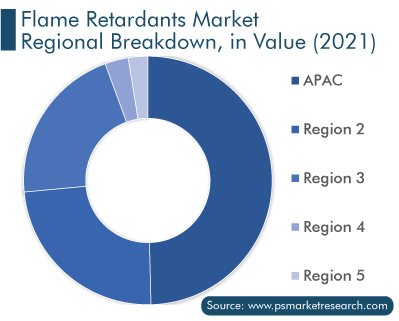 To maintain a strong market position, the significant players have adopted a number of strategies, including product launches, facility expansions, acquisitions, investments, collaborations, and partnerships. For instance:

Frequently Asked Questions About This Report
What is the current flame retardants market value?+

Which is the largest region in the flame retardants industry?+

What is the biggest driver for the flame retardants market?+

The market for flame retardants is driven by the stringent regulations of governments on fire safety.

Players in the flame retardants industry are engaging in product launches, collaborations, and acquisitions.

What are the growth prospects for the flame retardants market?+