From $3.8 billion in 2019, the global fingerprint sensors market value is expected to advance at a CAGR of 13.6% during 2020–2030. The key reason behind the increasing sale of such instruments is the rising demand for them in the government sector and consumer electronics. Such devices like biometric sensors generate a digital image of the fingerprint pattern, which is why they are important in areas where the authentication of people’s identity is required. 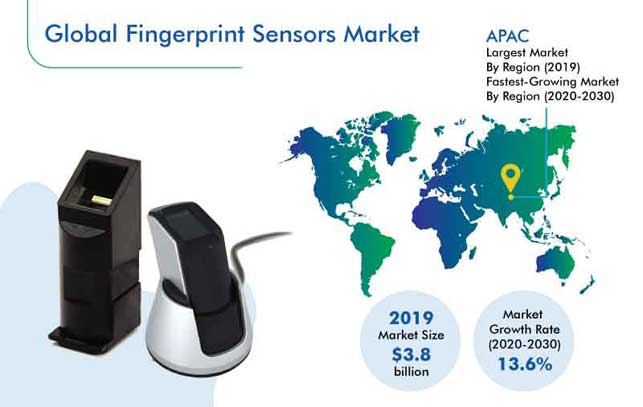 Area/touch sensors, under segmentation by type, would generate higher revenue in the market till 2030. This is attributed to their better sensing ability than swipe sensors, which is why they are widely adopted in consumer electronic devices, such as laptops and smartphones.

Historically, the capacitive category, on the basis of technology, dominated the market, as such these sensors are more cost-effective than those using other technologies. Moreover, capacitive technology in biometric sensors are easier to use, and they also provide better security to the data of the user.

The banking, financial services, and insurance (BFSI) division, based on vertical, is predicted to observe the highest market CAGR in the coming years. This would be because of the swift introduction of biometric sensors by banks around the world and rising focus on ways to prevent cybercrimes, which have plagued the industry for quite some time now.

Currently, the largest procurer of fingerprint sensors is Asia-Pacific (APAC), as a result of the growing demand for such instruments by the Indonesian, Chinese, and Indian governments, for official verification purposes. In addition, with the increasing disposable income of the continuously booming population, the popularity of smartphones is rising in the region, thereby propelling the integration of such sensors. 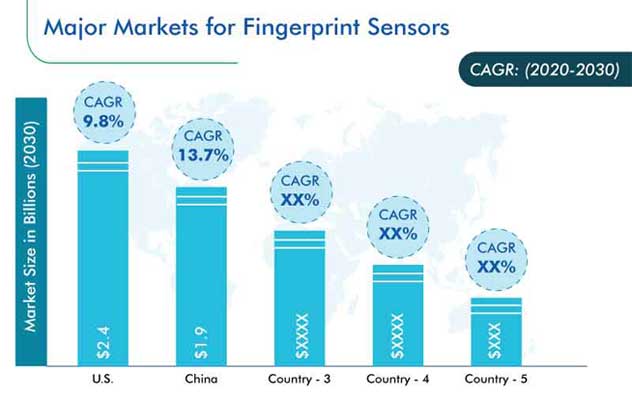 The most prominent trend being seen in the fingerprint sensors market is the adoption of in-display variants. This has been a result of the increasing use of online payments and uptake of smartphones around the globe. Further, with the strong focus of smartphone manufacturers on decreasing the bezels and making the devices sleeker and smoother, they are rapidly integrating in-display fingerprint sensors. For instance, the X series of smartphones with in-display sensors was launched by Vivo Communication Technology Co. Ltd. in 2018. In the same vein, Qualcomm Incorporated introduced an ultrasonic in-display fingerprint sensors, which is more secure and reliable than its previously launched line of optical sensors, in 2019.

Rising Requirement for Fingerprint Sensors by Governments Is Driving Market

Among the most important factors driving the fingerprint sensors market is the rising demand for such instruments from the government of various countries. Military headquarters, government organizations, courts, and other such public bodies are quickly installing advancedsensors, with a focus on making the premises more secure. These instruments are also being adopted to authenticate the identity and prevent duplication, during the provision of various services to the public. For instance, the Unique Identification Authority of India (UIDAI) uses Aadhaar-based biometric identification to disperse the benefits sanctioned under various social welfare schemes to the economically weaker sections. Under the Aadhaar model, the fingerprints of people are captured, so their identity can be authenticated while distributing the benefits.

An attractive opportunity area for the fingerprint sensors market is the emergence of biometric cards in the BFSI domain. The risk of thefts and frauds in the sector is rising, with the growing penetration of the internet and connected devices, which is creating a demand for these sensors to mitigate such threats. Compared to a conventional payment card, one which is equipped with the fingerprint-reading technology is more secure as well as faster. Payment cards integrated with such sensorsnot only authenticate the users’ identity in less than one second, but they also offer more security than a standard four-digit pin. In 2018, Visa Inc., in collaboration with Bank of Cyprus and Mountain America Credit Union, launched its dual-interface biometric payment cards on a pilot basis.

To gain a wider customer base across varied industries, companies in the fingerprint sensors market are quickly launching new products.

For instance, in February 2020, Fingerprint Cards AB added capacitive touch sensors, under the FPC1024 and FPC1020 series, to its portfolio of fingerprint authentication touch sensors, which the company supplies to logical and physical-access device manufacturers. With a smaller size than its previous variants, these sensors are designed for better biometric performance.

In the same vein, the Dannoline of low-power light-emitting sensors (LES)-based fingerprint scannerswere launched by Integrated Biometric LLC in June 2019. With low power requirement, low weight, and compactness, these instruments have been purposely designed for biometric fingerprint identification applications. 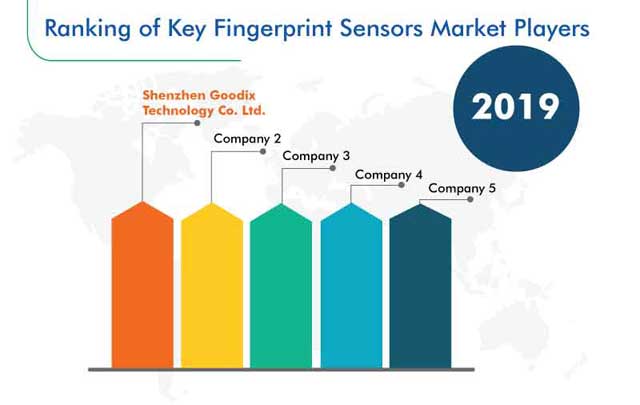 Frequently Asked Questions About This Report
Why is the fingerprint sensors market growing?+

The fingerprint sensors market is growing because of the increasing usage of such instruments in consumer electronics and the government sector.

The ultrasonic category, based on technology, will witness the highest CAGR in the fingerprint sensors industry.

Where does the fingerprint sensors market have the brightest future?+

The fingerprint sensors market has the brightest future in APAC.

On what basis has the fingerprint sensors industry been segmented?+

The fingerprint sensors industry has been segmented on the basis of type, technology, vertical, and region.

What is the key growth strategy of fingerprint sensors market players?+