The global extracorporeal membrane oxygenation machine market size stood at $529.4 million in 2021, and it is projected to reach $834.5 million by 2030, advancing at a CAGR of 5.2% during 2021–2030. This growth can be attributed to the rising prevalence of respiratory failures and cardiopulmonary diseases, and the increasing number of people requiring ECMO therapy due to the surging cases of chronic obstructive pulmonary diseases. Moreover, technological advancements in the field of healthcare, government initiatives regarding the awareness of such diseases and the merits of ECMO devices, and high R&D spending drive the market. 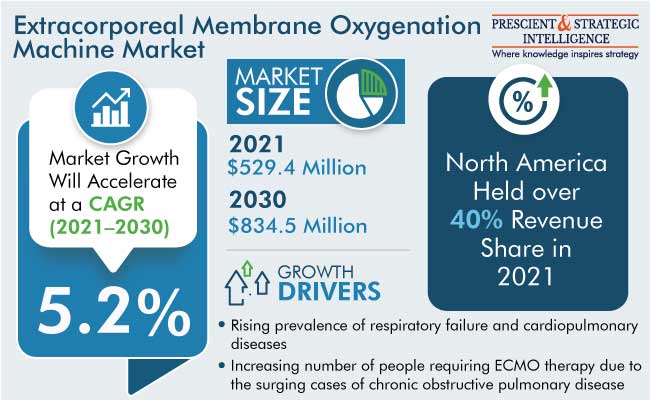 Sales of Oxygenators Contribute Largest Revenue to the Market

The oxygenators category held the largest revenue share, of over 35%, in 2021 in the market, and it is further projected to continue witnessing the same trend during the forecast period as well. This is due to the rising incidences of severe lung diseases among children and the growing awareness regarding the applications of ECMO devices. Moreover, these oxygenators are majorly used by perfusionists in cardiac surgical procedures in conjunction with heart-lung machines and are also extensively used in neonatal intensive care units associated with ECMO machines.

Moreover, the heat-cooler units category is expected to witness significant growth during the forecast period. This can be ascribed to the wide use of these units in cardiothoracic or transplantation surgeries and the increase in incidences of cardiopulmonary diseases such as chronic obstructive pulmonary diseases and cystic fibrosis. 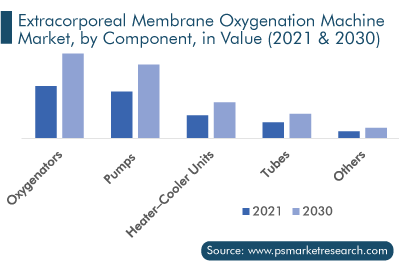 Portable Machines Are Trending in the Market

ECMO machines used for respiratory applications accounted for the largest revenue share, of around 45%, in 2021, and the category is expected to grow at a significant pace during 2021–2030. The rise in prevalence of target diseases, increased smoking and tobacco use, and excessive alcohol consumption, which can lead to chronic diseases or respiratory failure, and the high need for early diagnosis and diagnostic imaging are the key factors responsible for the increasing market share of this category.

Furthermore, neonatal is one of the major patient types generating the high demand for respiratory ECMO machines. This is due to the vast usage of ECMO machines to treat numerous disorders such as pneumonia, respiratory distress syndrome, and congenital diaphragmatic hernia (CDH).

Veno-arterial is the fastest-growing category, advancing at a CAGR of over 5% during the forecast period, among all modalities. This can be attributed to its effectiveness and reliability in the exchange of gases, widespread use in cardiac arrest patients, and assistance with algorithmic life support techniques to reestablish blood flow. Additionally, it is widely used to treat patients with thromboembolism and pulmonary hypertension, particularly in cases of abrupt decompensation, which leads to the extracorporeal membrane oxygenation machine market expansion.

The rate of ECMO therapy adoption will increase, as patient awareness of the benefits of cardiopulmonary support for severe respiratory and cardiac diseases rises. The launch of patient awareness programs for ECMO machines and their applications in emerging regions such as Asia and the Middle East has resulted in the surging demand for these machines. For instance, in May 2022, the Department of Health Abu Dhabi (DoH), organized the first Abu Dhabi Trauma and ECMO conference to raise the standard of care for trauma patients in the city, create a road map for those who require ECMO, highlight the significance of trauma management and ECMO programs in the healthcare sector, and share the most recent applications and experiences.

Similarly, the Latina Preventive Heart Disease (LPHD) program was launched in LATAM, with the goal of raising awareness about improved therapies and tools for CVD disorders. Thus, the surging awareness of ECMO machines will boost the market growth.

Geographically, the North American market reported the largest revenue share, of around 40%, in 2021, and it is also projected to maintain its position in the coming years. This is ascribed to the presence of a substantial patient base suffering from cardiopulmonary disorders and respiratory failure and the surge in the rate of adoption of ECMO machines in regional hospitals.

In addition, the U.S. contributes the majority of revenue to the regional market. This is due to the presence of a large number of market players, advanced healthcare infrastructure, high healthcare spending, and high prevalence of CVDs and respiratory disorders in the country.

On the other hand, the APAC extracorporeal membrane oxygenation machine market will register the fastest growth, advancing at a CAGR of over 5%, during 2021–2030. This can be attributed to the growing public awareness of ECMO machines and their merits, the rising aging population, and the surging efforts by various governments and business organizations to attract foreign direct investment (FDI) in the medical equipment and healthcare sectors.

Moreover, China is the major revenue generator in the regional market. This is due to its evolving healthcare infrastructure, high success rate of ECMO machines during cardiothoracic surgeries, and high investment by market giants to set up their facilities in the country.

In addition, Europe held a significant revenue share in the market in 2021, and it is expected to maintain the same trend in the coming years. This is ascribed to the increased adoption of cutting-edge ECMO devices by medical institutions in European nations, coupled with the rising number of patients with respiratory and cardiac disorders in the region.

Furthermore, Germany is the major revenue contributor to the regional market, as it has advanced technologies associated with ECMO machines and high R&D spending in the field of the healthcare sector. 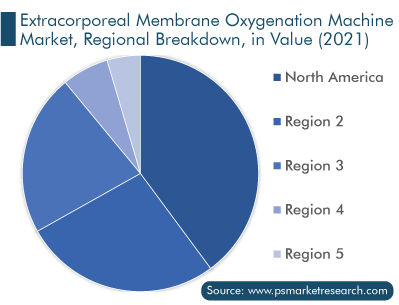 Strategic Development by Market Players to Gain a Competitive Edge

Key Players in the Extracorporeal Membrane Oxygenation Machine Market Are:

Frequently Asked Questions About This Report
What was the size of the extracorporeal membrane oxygenation machine market in 2021?+

What will be the growth rate of the extracorporeal membrane oxygenation machine market during the forecast period?+

During 2021–2030, the growth rate of the extracorporeal membrane oxygenation machine market will be 5.2%.

Which is the largest application area in the extracorporeal membrane oxygenation machine market?+

Respiratory is the largest application area in the extracorporeal membrane oxygenation machine market.

What are the major drivers for the extracorporeal membrane oxygenation machine market?+

The major drivers of the extracorporeal membrane oxygenation machine market include the rise in the prevalence of cardiopulmonary diseases and respiratory failure, technological advancements in healthcare solutions, and high investment in the healthcare sector.