Valued at $18.6 billion in 2019, the global extended reality (XR) market size is projected to witness a CAGR of 48.3% during the forecast period (2020–2030). The major factors behind the growing XR industry are the rising adoption of augmented reality (AR)/virtual reality (VR), 5G, smartphones, and connected devices, increasing collaborations and partnerships, and rising focus on gesture-based computing across the globe. 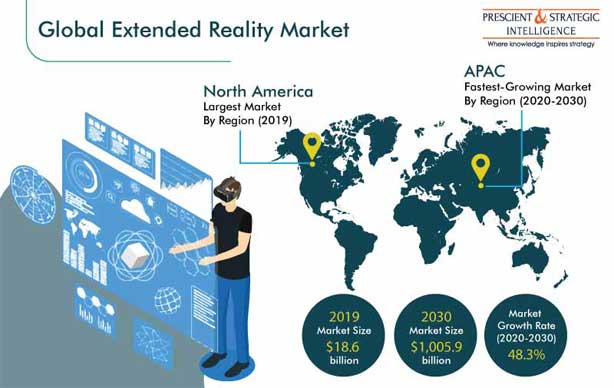 The ongoing COVID-19 pandemic has raised the demand for XR, due to the unexpected situation of the lockdown that has led the employees of several organizations to work from home, thereby increasing the need for virtual meetings and training. However, the pandemic has affected the manufacturing industry severely. According to a survey conducted during February 28–March 9, 2020, by the National Association of Manufacturers (NAM), on the manufacturing industry in the U.S., more than 35% respondents said that COVID-19 has impacted their supply chain operations, and over 53% expected a change in the operations in the coming months. The severe impact on the manufacturing industry has halted the supply of XR devices across the world and reduced the consumer expenditure on non-essential items, owing to which the extended reality market growth in the years 2020 and 2021 will be affected.

Hardware Is Largest Component in Market

On the basis of component, the global extended reality market is categorized into hardware, software, and services. In 2019, the hardware category accounted for the largest size in the extended reality market. This is ascribed to the reducing cost of hardware components, such as sensors, displays, cameras, and position trackers, and growing penetration of smart devices. Moreover, the introduction of untethered VR/AR devices, such as Oculus Go, HTC Vive Focus, and Lenovo Mirage Solo, has further supported the market growth in this category.

On the basis of device type, the global extended reality market is categorized into mobile, personal computer (PC), and headset. In 2019, the mobile category held the largest share, and it is also expected to be the fastest-growing category in the years to come. This can be mainly ascribed to the growing penetration of smartphones and increasing use of these devices for VR/AR applications. According to an article published by Informa plc in January 2020, smartphone shipments across the world reached 1.38 billion units in 2019.

On the basis of user, in 2019, the single-user category had the larger size in the extended reality market. The multi-user category is projected to witness the faster growth, owing to the rising adoption of multi-user AR and VR devices in the retail, manufacturing, aerospace & defense, media & entertainment, and education industries, for training and education purposes.

In 2019, the business engagement category had the larger share in the global extended reality market, on the basis of delivery model. This can be attributed to the increasing adoption of immersive technologies for employee training and development purposes. Moreover, the increasing use of XR technologies to solve business issues and create innovative solutions, to meet client needs, is further expected to drive the category growth in the market in the coming years.

Based on application, the extended reality market is categorized into AR, VR, and mixed reality (MR). In 2019, the AR category accounted for the largest market size, because of the high demand for AR devices and applications in the healthcare, retail, and e-commerce industries. In addition, the rising investments in AR, along with the growing demand for this technology among individuals, are further driving the category growth. According to a report, titled Digital Reality, published in 2019 by Deloitte Touche Tohmatsu Limited, nearly 40% of the consumers agreed to pay more if they were allowed to test the product they are purchasing with AR. As per the same report, 55% of the technology users admitted that AR makes shopping more fun and exciting.

The gaming category is expected to witness the fastest growth during the forecast period in the extended reality market, based on industry. This is ascribed to the increasing adoption of immersive technologies in the gaming industry, along with the rising investment by key players. For instance, in February 2020, Facebook Inc.’s subsidiary, Facebook Technologies LLC, acquired Sanzaru Games Inc. to expand its VR gaming offerings. Moreover, the growing demand for games in the Latin America (LATAM) and Middle East and Africa (MEA) regions would drive the category growth in the years to come. As per an article published by Lionbridge Technologies Inc. in April 2019, LATAM was one of the fastest-growing gaming markets in the world, with nearly 234 million gamers in 2018. In addition, the gaming market in the region is projected to reach $3.6 billion by 2023, from $2.2 billion in 2018.

In 2019, North America accounted for the largest size in the extended reality market. The presence of key market players, along with the rapid adoption of XR solutions, is the major factor behind the region’s dominance. Moreover, the increasing focus on AR and VR in the education and aerospace & defense industries is expected to propel the growth of the XR market in North America. For instance, in 2018, the U.S. Department of Education’s Office of Special Education Programs (OSEP) announced plans to invest $2.5 million in a program that would leverage VR to nurture social skills in students with disabilities.

The Asia-Pacific (APAC) region is expected to witness the fastest growth during the forecast period in the extended reality market. This is ascribed to the rising proliferation of AR/VR mobile applications, coupled with the growing use of immersive technologies for gaming, media & entertainment, and other purposes in the region. Moreover, the surging spending on immersive technologies for training and development purposes is a key factor contributing to the growth of the regional market. According to a report published in 2019 by the Infocomm Media Development Authority (IMDA) of Singapore, AR/VR spending in APAC (excluding Japan) increased by over 100%, to reach $11.1 billion in 2018, from $4.6 billion in 2017. 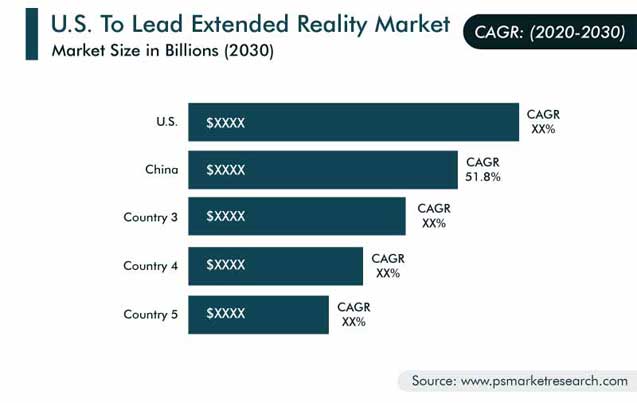 The growing adoption of 5G across the globe is one of the key extended reality market trends. XR solutions have enhanced network requirements, such as high reliability, low latency, and high bandwidth, which 5G can provide at a low cost. Thus, the rising 5G mobile shipments and rapid adoption of 5G connections are the major factors benefitting the market. According to a report published in 2019 by Accenture plc, 5G connections are projected to witness strong growth in the near future, and the estimated number of connections by 2025 will be 187.9 million in the U.S., 464.3 million in China, 102.8 million in Japan, 87.5 million in India, and 45.8 million in Russia. 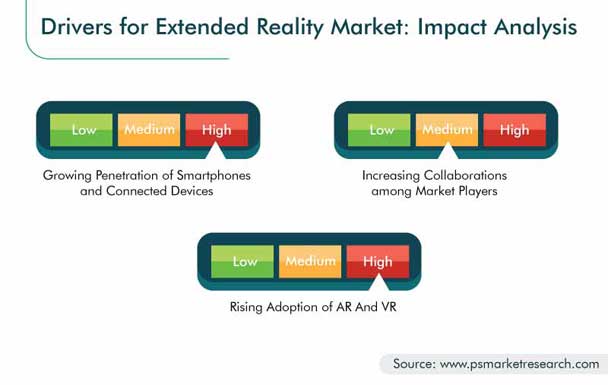 The major factor behind the growth of the extended reality market is the increasing penetration of smartphones and connected devices across the globe. The number of smartphone users is increasing rapidly, coupled with the usage of AR applications on these devices, and this is expected to further drive the market growth. According to a report published by the GSM Association in March 2020, there were 5.2 billion unique mobile subscribers, as of December 2019, accounting for nearly 67% of the global population, and this number is projected to reach 5.8 billion by 2025, accounting for around 70% of the total population then.

The growing collaborations and partnerships among major market players, to make the XR technology available to an extensive user base in numerous industries, including retail, education, and hospitality, can be viewed as another key driver for the growth of the extended reality market. In January 2020, Accenture plc and Qualcomm Incorporated collaborated with InterContinental Hotels Group, to pilot run a solution that uses AR and VR to improve the event planning experience. The XR Event Planner solution by Accenture plc places event planners, buyers, and hotel sales staff on a common virtual renovation platform (event space), allowing them to remotely configure and envision the layout in real time.

The rising adoption of AR and VR by businesses and general public is another key driver expected to support the growth of the extended reality market during the forecast period. The increasing penetration of head-mounted displays (HMD) among consumers, for knowledge and entertainment purposes, as well as among businesses, to provide a more interactive and engaging customer experience, are the major factors behind the rapid adoption of AR/VR solutions worldwide. As per a report published in December 2017 by Accenture plc, in collaboration with the German Digital Media Association, HMD device shipments are expected to reach 81 million by 2021, from 22 million in 2018.

The extended reality market is fragmented in nature, owing to the presence of a large number of market players, such as Qualcomm Incorporated, Accenture plc, Adobe Inc., Unity Technologies, and Microsoft Corporation. In recent years, various companies in the extended reality market have adopted mergers & acquisitions as a key strategy, in a bid to increase their market share. For instance: 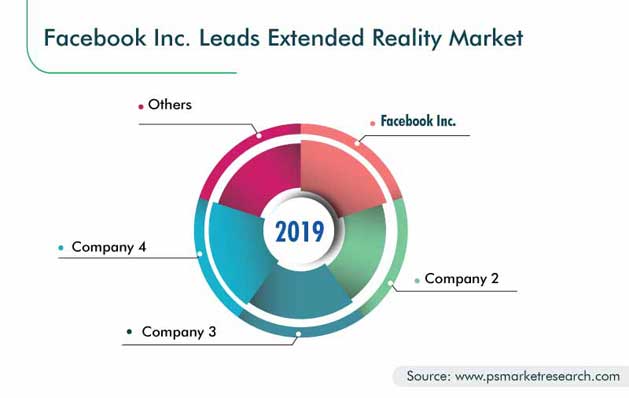 Some of the key players in the global extended reality market report include:

Based on Delivery Model

What is the growth forecast for the extended reality market?+

How is COVID-19 pandemic impacting the extended reality industry?+

The COVID-19 pandemic is impacting the extended reality industry favorably, because the lockdown has forced people to work from home, thereby creating a requirement for virtual training and meetings.

Why is the industrial & manufacturing sector key for the extended reality market growth?+

The industrial & manufacturing sector is important for the extended reality market growth because XR is widely used in the oil & gas, chemicals, and mining industries for training purposes.

What role will 5G play in the growth of extended reality industry?+

Which player held the largest extended reality market share in 2019?+