The global epoxy adhesive market stood at $8,217.9 million in 2021, and it is expected to reach $13,483.9 million by 2030, demonstrating a CAGR of 5.7% during 2021–2030. This is ascribed to the surging demand for these adhesives from the cement, construction, automotive, manufacturing, woodwork, plastic, and marine industries. 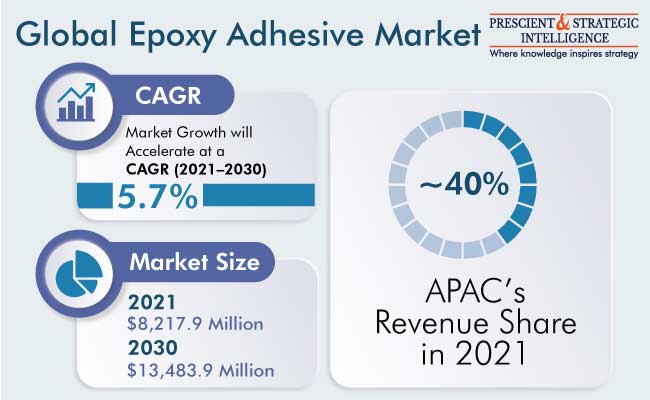 Hence, this factor is expected to create ample opportunities for players operating in the epoxy adhesive market in the coming years.

In order to cater to the rising demand for adhesives, market players are establishing their manufacturing plants in different parts of the world. They are also increasing their production capacities to fulfill the requirements. For example:

The building & construction sector is the largest end user of epoxy adhesives in the market. Thus, the category generated the highest revenue, of around $2.3 billion, in 2021. This is attributed to the versatility of the adhesives in building and construction applications. These adhesives can be used for filling gaps, surface repairing, and laminating, and are also usable on various surfaces including bricks, cellular PVC, ceramics & porcelain, fiberglass, gypsum & drywall, medium-density fiberboard, metal, plywood, stainless steel, and wood and water-resistant tile. Further, the rise in maintenance and construction activities around the globe has intensified the use of these structural adhesives. 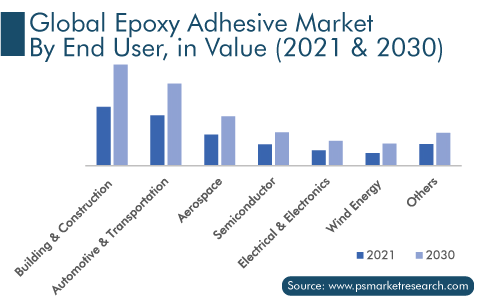 The surging demand for these adhesives in the automotive & transportation industry for structural bonding applications is responsible for the significant market growth in this category, advancing at a CAGR of around 6%, during 2021–2030. Auto manufacturers are inclined toward these adhesives due to their heat- and weather-resistant properties and rigid bonding feature, which aids in enhancing the structural integrity of vehicles. Hence, with the increasing demand for vehicles, the need for epoxy-based adhesives is also expected to rise in the coming years.

One-Component Type Is the Major Revenue Contributor to the Market

The one-component category dominated the epoxy adhesive market, due to its superior properties such as quick-curing time and solvent-free composition. Moreover, one-component adhesives are ideal for use on assembly lines because, unlike two-component adhesives, no mixing is required, making the manufacturing process easier and more streamlined. However, two component-based epoxy adhesives are expected to witness high demand from building and construction applications in the coming years.

The offline distribution channel offers great flexibility in choosing different products and quality assessments. Furthermore, the construction and automotive industries source their required volume directly from dealers and suppliers and prefer wholesale shopping. Based on the industry analysis, the category is projected to hold more than 75% revenue share in the market in 2030.

Due to its massive construction, automotive, electrical & electronics, and semiconductor industries, APAC holds the largest market share. Moreover, epoxy adhesives are widely used in manufacturing and construction activities, which lead the regional market to maintain its dominant position in the coming years as well.

Europe held the second position in the revenue generation in the epoxy adhesive market in 2021, as the demand for adhesives from the automotive and aerospace sectors is high in the region. 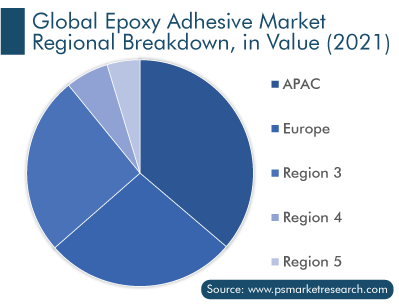 Key Players Are Involved in Partnerships to Expand their Presence

Key players in the epoxy adhesive industry are involved in partnerships to strengthen their presence. For instance, in July 2020, Huntsman Corporation announced its partnership with its distribution partners Azelis Americas CASE LLC in the U.S. and Azelis Canada Inc. in Canada.

Key Players in the Market Are:

The research offers the market size of the global epoxy adhesive market for the period 2017–2030.