The global endoscopic retrograde cholangiopancreatography market size stood at $1,270.9 million in 2021, which is expected to reach $2,557.7 million by 2030, advancing at a CAGR of 8.1% during 2021–2030. This is mainly ascribed to the rise in the prevalence of pancreatic cancer and a paradigm shift toward minimally invasive procedures. 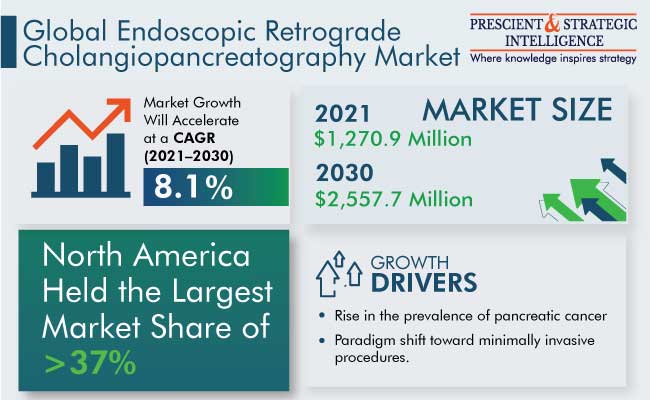 Endotherapy devices and endoscopes collectively held around 70% share in 2021, with the former accounting for about 40%. This is attributed to the increase in demand for ERCP devices coupled with the high incidence of pancreatitis, pancreatic cancer, gallbladder stones, and choledocholithiasis. As per the American Health Organization, more than 60,000 people are estimated to have suffered from pancreatic cancer in 2022, and around 50,000 people will die from it, in the U.S.

The endoscopes category accounted for the second-largest share, of around 30%, in 2021, due to the spur in cases of chronic biliary and GI diseases. For instance, more than 20 million Americans were suffering from chronic digestive disorders in 2021. In addition, companies are strenuously participating in the launch of various endoscopes, which is causing remunerative opportunities for the market. For instance, in January 2022, Cook Group Incorporated announced the launch of an endoscopic clipping device, Instinct Plus, in the U.S. This device provides firm clip retention and smooth handling with a duodenoscope for prophylactic clipping in the GI tract. 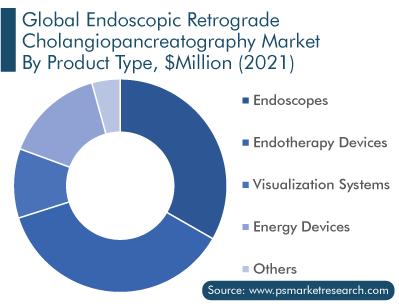 Among all applications, the biliary sphincterotomy category accounted for the highest revenue share, of around 45%, in the endoscopic retrograde cholangiopancreatography market in 2021. This is on account of the high use of ERCP devices in the treatment of bile obstruction, common bile duct stones, tissue sampling, and stent placement. For instance, the incidence of intrahepatic bile duct cancer is around 10 per 100,000 men and women annually, in the U.S. 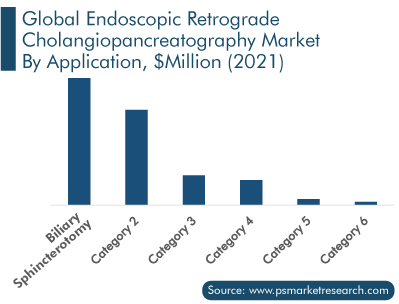 Hospitals & clinics are the largest end users of ERCP, and the category is expected to record the highest CAGR, of around 8.3%, in the forecast period. This can be ascribed to the rising number of trained and accredited endoscopists, such as gastroenterologists or surgeons, a spur in the number of hospitals, and the majority of endoscopic diagnosis interventions performed in these healthcare facilities. Also, the same-day surgical care comprising both preventive and diagnostic procedures offered by various clinics drives the market growth in this category.

In 2021, the North American endoscopic retrograde cholangiopancreatography market accounted for the highest revenue, of around $471.4 million, in 2021. Around 3% of deaths in the U.S. region occur due to pancreatic cancer every year. Moreover, the rising consumption of alcohol is leading to several diseases such as pancreatic neuroendocrine tumor (PanNET) and pancreatic adenocarcinoma. These factors are resulting in the high usage of ERCP procedures in the region. In addition, more than 20% of the Canadian population suffers from bile duct disease, which is further driving the market growth.

Additionally, the approval of various ERCP devices by the FDA in the region also intensifies the market growth. For instance, in July 2020, Ambu Inc. received the FDA approval for Ambu aScope Duodeno, which is a sterile, single-use duodenoscope.

Whereas, the APAC market is expected to register the fastest growth, propelling at a CAGR of 8.5%, during the forecast period. This can be attributed to the increasing patient awareness regarding ERCP devices coupled with the rising prevalence of GERD and pancreatic cancer, in the region. Moreover, the surging government initiatives and awareness programs toward bile duct cancer, pancreatic conditions, and related complications are expected to propel the demand for ERCP devices in APAC.

Furthermore, Japan and China collectively accounted for around 60% share of the regional market in 2021. This is due to the high incidence of GI-related cancers in both countries. For instance, as per a government organization, there were around 3,00,000 GI-related cancer deaths in China in 2021, which accounts for more than 13% of all cancer-related deaths in the nation.

In recent years, players operating in the endoscopic retrograde cholangiopancreatography market have been involved in acquisitions, product launches, and partnerships, in order to attain a significant position. For instance:

Key Players in the Market for ERCP Devices Are:

Frequently Asked Questions About This Report
What was the size of the endoscopic retrograde cholangiopancreatography market in 2021?+

The endoscopic retrograde cholangiopancreatography market size stood at $1,270.9 million in 2021.

What will be the growth rate of the endoscopic retrograde cholangiopancreatography market?+

During 2021–2030, the growth rate of the endoscopic retrograde cholangiopancreatography market will be around 8%.

Which is the largest end user of ERCP devices?+

Hospitals & clinics are the largest end users of ERCP devices.

What are the major drivers for the endoscopic retrograde cholangiopancreatography market?+

The major drivers of the endoscopic retrograde cholangiopancreatography market include the surge in incidences of pancreatic cancer, GI, and chronic biliary disorders and a paradigm shift toward minimally invasive procedures.