Geographically, Asia-Pacific (APAC) contributed the highest revenue to the electric bus charging station market in 2018 due to the large-scale usage of electric buses in China. The market is predicted to exhibit the fastest growth in North America in the future on account of the implementation of favorable government initiatives regarding the adoption of electric mobility, which is resulting in the surging deployment of electric buses in the region. 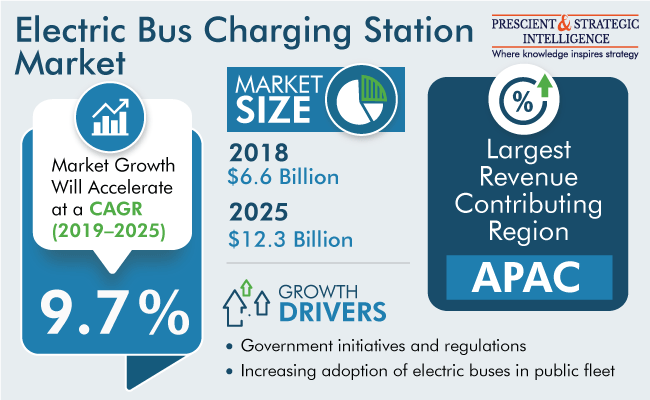 The soaring usage of electric buses in public transport fleets is one of the major factors driving the expansion of the market for electric bus charging stations. With the enactment of the Kyoto Protocol in 192 countries in 2005, the world is witnessing a rapid transition toward a low-carbon economy.

Governments of many countries are launching incentive programs, such as subsidies, tax rebates, and grants, for developing the electric bus charging infrastructure. For example, the European Commission announced a budget of $82.7 (EUR 70 million) in February 2018 for the deployment of plug-in hybrid and electric buses in public fleets and development of the related charging infrastructure. Additionally, the Chinese government launched an initiative for installing 500,000 public charging stations from 2015 to 2020, in order to encourage the deployment of electric buses in the country.

A uniform technical standard is necessary so that original equipment manufacturers (OEMs) and charging infrastructure developers can cater to a certain voltage rating/plug design specification. The lack of such standards is not due to uncertainties in the technology but because of the slow adaptation of the regulatory framework of international standard-setting organizations to include these technologies.

The mushrooming demand for electric bus charging stations in private spaces is creating immense growth opportunities for the players operating in the market. For instance, the growing competition in the hospitality sector is positively impacting the market growth, as many hospitality service providers are offering electric bus charging facilities on their premises. Additionally, many large multinational corporations are providing charging facilities as part of their employee welfare programs, thereby generating lucrative growth opportunities for charging station manufacturers and installers.