Asia-Pacific (APAC) is expected to be the fastest growing diesel exhaust fluid market during the forecast period. The potential growth is attributed to the high demand for transportation, to facilitate the movement of goods. This has promoted the sales of heavy- and medium-duty vehicles, which has also resulted in high levels of air pollution. Owing to the increasing level of vehicular pollution, several countries, including China and India, have either implemented or are in the process of implementing stringent emission norms, which will impel fleet operators to install emission control systems, which, in turn will boost the demand for diesel exhaust fluid in the APAC region. 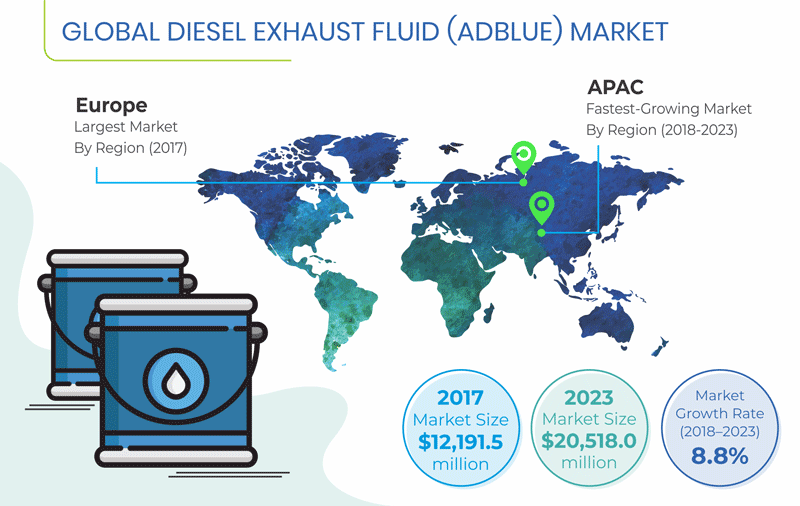 Historically, the demand for diesel exhaust fluid was driven by medium- and heavy-duty commercial vehicles, such as trucks, and construction and mining vehicles. However, the rising stringency for vehicular emission and fuel efficiency in North American, European, and Asian nations is resulting in a rising demand for AdBlue in passenger cars as well. Several regulations have been imposed by the government of various countries to reduce the emission from passenger cars, which has paved the way for the diesel exhaust fluid market advance in the passenger cars segment.

Due to the rapid industrialization and improving logistics infrastructure, to deliver goods in far-flung areas efficiently, the demand for heavy-duty vehicles, such as trucks and trailers, is rising at a significant pace. The rising demand for heavy-duty vehicles will positively impact the sales of trucks, which are set to reach around four million units by 2023, thereby helping in the growth of the diesel exhaust fluid market. 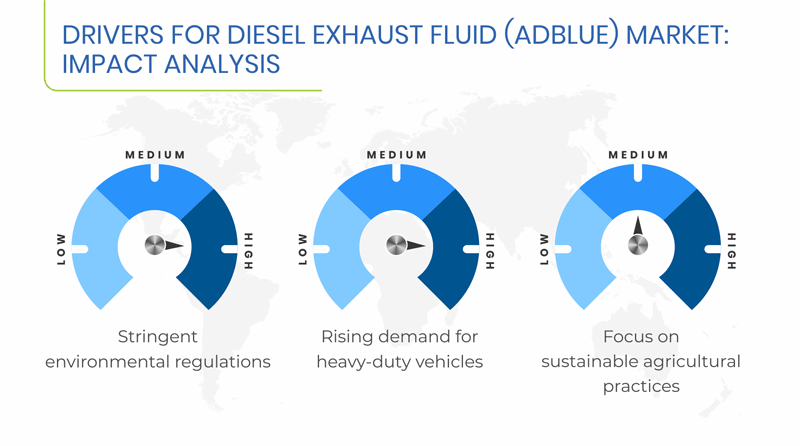 Emerging economies, such as China, India, Brazil, and Russia, have witnessed a rapid surge in activities such as construction and infrastructure development and manufacturing, which are offering a significant boost to the transportation and logistics industries in these countries. Moreover, the adoption of stringent emission norms will encourage the consumption of AdBlue for reducing emissions, which would offer diesel exhaust fluid market players a high potential for growth.

The bulk storage category, by storage solution, contributed the highest revenue, of $5,799.6 million, to the diesel exhaust fluid market in 2017. This is attributed to the rising logistics and transportation requirements, due to which the fleet of heavy-duty vehicles is increasing, which, in turn, is boosting the demand for bulk storage solutions for diesel exhaust fluid.

The non-vehicular category, under the application segment, would register faster growth during the forecast period (2018–2023), on account of AdBlue’s surging usage in diesel irrigation pumps and generators.

Globally, Europe was the largest diesel exhaust fluid market during the historical period (2013–2017), in terms of both value and volume, and it is expected to maintain its dominance during the forecast period. This is due to the regional countries, such as Germany and France, which are focusing on sustainable development. Moreover, implementation of stringent regulatory norms in European countries also boosts the demand for diesel exhaust fluid. Considering the future market scenario, Germany is expected to lead the European market, generating revenue of $1,686.9 million in 2023.

During the forecast period, the diesel exhaust fluid market is expected to witness the fastest growth in the APAC region, on account of the increasing environmental awareness, which is why APAC countries are strengthening their emission norms. In the region, China was the largest market for diesel exhaust fluid, accounting for a 34.1% share, in terms of volume, in 2017. The need for the efficient and timely movement of manufactured goods to the marketplace and ports has helped in boosting the demand for commercial vehicles, such as trucks and trailers. With the onset of stringent emission norms in China, the demand for diesel exhaust fluid for commercial vehicles is expected to rise during the forecast period. 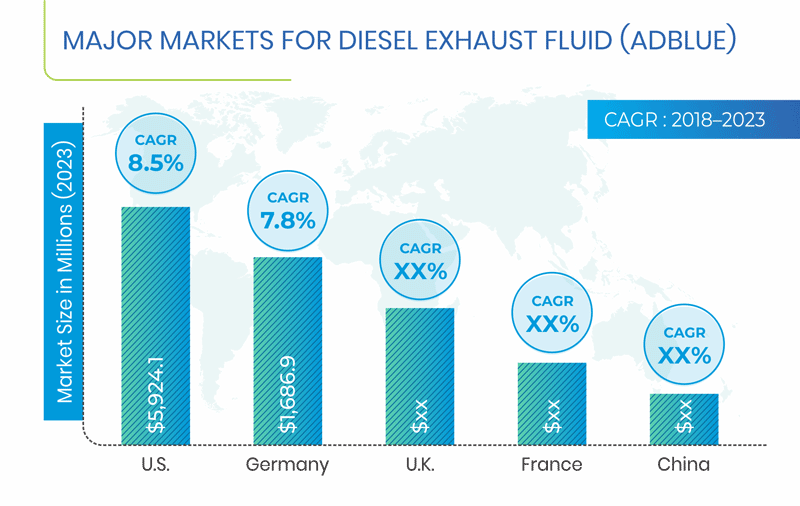 In recent years, major players in the diesel exhaust fluid market have taken several strategic measures, such as mergers and acquisitions and facility expansions, to gain a competitive edge in the industry. For instance, in April 2018, Yara International ASA and BASF SE opened a new ammonia plant in Freeport, Texas, U.S. The project cost was $600 million and 68% of the plant is owned by Yara and 32% by BASF SE. The plant capacity is 750,000 metric tons of ammonia per year.

Furthermore, in February 2018, Yara International ASA opened the world’s largest AdBlue plant in Brunsbuttel, Germany, which has a production capacity of 1.1 million tons per year. This new production site includes a new deep-sea ship loading facility, an automated truck loading station, and a 17,500 m3 AdBlue tank. The project was successfully completed within the defined budget of around $32.0 million.

Based on Storage Solutions