The COVID-19 pandemic forced governments all over the world to impose multiple lockdowns, which resulted in partial or fully closed manufacturing factories. Moreover, construction activities were halted in order to contain the spread of coronavirus, and, thus, many projects across the globe experienced a sudden break. Depending on the location of infrastructure projects, the nature of the impact varies. However, now, the situation in many countries is improving, and construction is restarting. 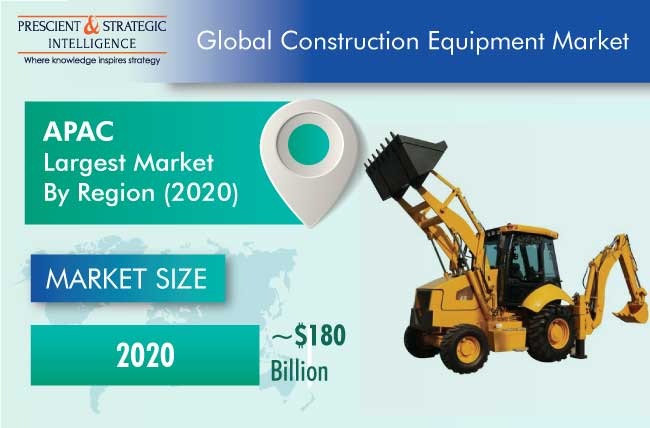 The earth moving machinery category is projected to hold the largest market share in the forecast period, based on product. This will mainly be because these machines offer a good grip on snow and in the mud. Moreover, these machines are rather important at construction sites because of their ability to perform a wide range of work, including laying foundations, grading soil, removing dirt and rocks, digging trenches, and carrying out demolition.

The 101–200 horsepower (HP) category accounted for the majority share in 2020, based on power output. This was mainly due to the higher penetration of 101–200-HP construction equipment as its power-to-weight ratio is favorable and it offers better fuel economy and reduces the operating costs for construction equipment operators and contractors. Furthermore, a power range of 101–200 HP is suitable for the majority of projects, such as road, airport, and commercial construction projects. Thus, this category is expected to continue to dominate the market during the forecast period.

APAC to have Largest Market Size during Forecast Period

Asia-Pacific (APAC) is set to generate the highest revenue in the forecast period. Construction projects are the backbone for the development of any economy in the world. The rapidly increasing investments by governments are supporting construction activities in the region. Essentially, the rapid urbanization in major countries, such as China, Japan, India, and South Korea, is leading to the increasing demand for housing, thereby helping the construction equipment market advance. 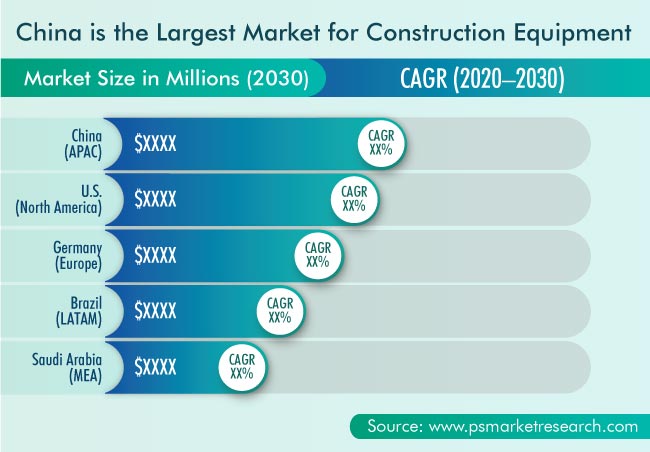 The trend of fully autonomous equipment in the industry isn’t a reality yet, but it is where the industry is eventually going. Autonomous equipment in the construction industry can offer benefits such as higher worker safety on site, increased productivity, and addressal of the problem of skilled labor shortage. For example, the D51i-24 and the D61i-24 dozers of Komatsu Ltd. have the ability to record terrain data as they move around a site. This data is further used by the system to make calculated decisions on whether it should cut and carry material, whether it should spread or fill that material, or whether it should finish grading.

The growing urbanization level in major countries across the globe is contributing toward the increase in employment opportunities, thus leading to a shift of people from non-urban to urban areas, especially in developing economies, such as China, India, and Brazil. The increasing population in such areas is raising the demand for housing, thus leading to the construction of new housing infrastructure, such as individual units and high-rise buildings. As per the World Bank Group, the urban population (out of the total population) in India was 27.7% in 2000, and it increased to 34.5% in 2019. Moreover, in developing countries, the continuous government support and heavy investments to modernize the public infrastructure are expected to drive the construction equipment market during the forecast period.

Some Key Players in Construction Equipment Market Are:

Frequently Asked Questions About This Report
What was the value of the global construction equipment market in 2020?+

The global construction equipment market value stood at ~$180 billion in 2020.

Which will be the largest region in the construction equipment market during 2021–2030?+

Asia-Pacific will be the largest region in the construction equipment industry during 2021–2030.

Why is the construction equipment industry expanding?+

The construction equipment industry is expanding because of the increasing residential construction activities, on account of the burgeoning demand for housing.

What is currently trending in the construction equipment industry?+

The usage of electric and autonomous equipment is the major trend currently being witnessed in the market for construction equipment.

Which product category will dominate the market for construction equipment during 2021–2030?+

The earth moving machinery category will dominate the market for construction equipment during 2021–2030, under the product segment.