From 17.6 million units in 2019, the total sales in the global commercial air conditioner (AC) market are expected to rise to 25.4 million units by 2030, at a CAGR of 3.5% during the forecast period (2020–2030). The key drivers for the growth of the market are the increasing number of construction projects around the world and surging disposable income of people. 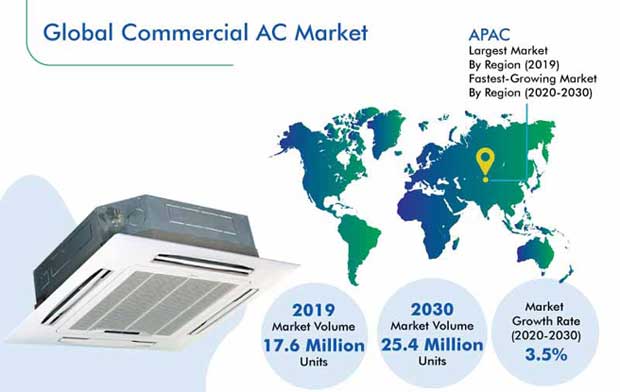 The variable refrigerant flow (VRF) category is predicted to witness the fastest growth in the commercial AC market during the forecast period, under segmentation by type. This is because such appliances are cost-effective and energy efficient and offer flexibility during installation, which is why they are swiftly replacing chillers in commercial settings.

In 2019, new installations accounted for higher sales volume, based on installation type, as the number of construction projects is rising due to the development of smart cities and FIFA World Cup 2026. With new infrastructure projects being initiated and completed, the demand for the installation of new AC systems is surging.

The hospitality division would hold the largest share in the commercial AC market in 2030, on the basis of vertical, due to the consistent rise in tourist activities. As per the United Nations World Tourism Organization (UNWTO), the international tourism industry grew by 7% in 2016–17. Tourism activities are expected to rise further, with the upcoming FIFA World Cup 2022 in Qatar, Expo 2020 in the U.A.E., and FIFA World Cup 2026 in the U.S., Canada, and Mexico, thereby leading to the construction of hotels, which would, in turn, lead to an increasing demand for commercial cooling systems.

During the historical period (2014–2019), Asia-Pacific (APAC) held the largest share in the market, on account of its huge construction sector, which already generates around 60% of the worldwide construction revenue. This is itself a result of the growing disposable income and migration of people from rural areas into urban pockets. For instance, the World Bank says that in 2011, 27.8% of the population lived in urban area, and this percentage had risen to 34% in 2018. 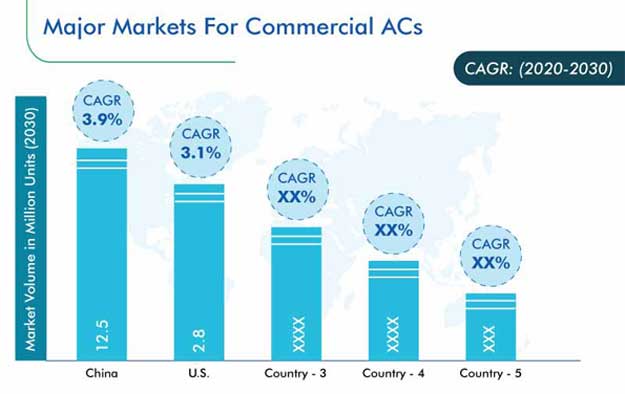 The key trend in the commercial AC market is the use of refrigerants with a low global warming potential (GWP). Currently, R507, R22, and R404A, which are based on hydrochlorofluorocarbons (HCFC) and chlorofluorocarbons (CFC), are the most widely used refrigerants, owing to their easy availability. But, due to the increasing awareness about their harmful effects on the environment, they are being replaced by R32 and other low-GWP variants. In October 2016, 197 countries signed the Montreal Protocol, under which high-GWP refrigerants are to be phased out by 2020 in developed countries and by 2030 in developing nations.

Among the numerous factors behind the advance of the commercial AC market, the most important one is the growing construction industry. From $10.5 trillion in 2017, the global construction sector is set to reach $12.8 trillion by 2022. The infrastructure pipeline includes metro rail systems, office complexes, and airports, which will require cooling equipment when complete. For instance, India plans to construct 100 airports in the next 15 years, while China is pursuing 216 airports’ completion by 2035. Similarly, an increasing number of skyscrapers are being erected, for instance 42 in Chicago, Illinois, U.S.; and 115 in London, U.K.

Product Launch is Most Important Strategic Measure in Market

Players in the commercial AC market are launching new cooling equipment to attract customers and dominate the competition. For instance, in September 2019, a VRF system with the R32 refrigerant was introduced in the U.K. by Mitsubishi Electric Corporation, to cater to the increasing demand for eco-friendly electrical appliances.

In the same vein, in 2019, a new range of single commercial air conditioners was launched by LG Electronics Inc. in the Philippines. These energy-efficient systems have been developed to answer the problem of the high electricity costs in the country. They are suitable for small and medium-sized offices and stores and restaurants. 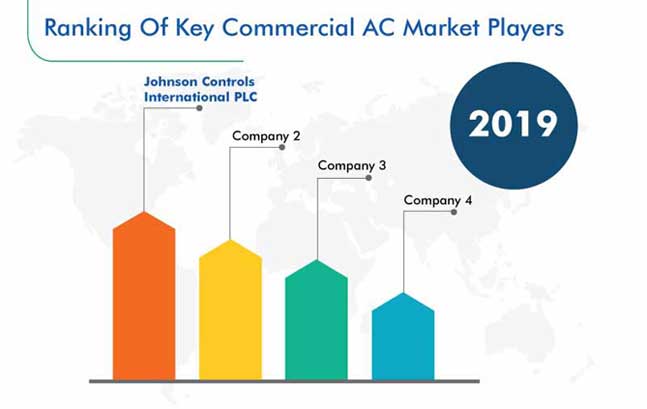 Frequently Asked Questions About This Report
How much sales growth will the commercial AC market witness?+

Which type of installations have proven more fruitful for the commercial AC industry?+

What kind of refrigerants gases are trending in the commercial AC market?+

Refrigerants with a low GWP are trending in the commercial AC market.

Which regions are covered in the commercial AC industry report?+

Which growth strategy is shaping the commercial AC market competition?+

Product launches are shaping the competition in the commercial AC market.