The global compressed natural gas (CNG) and liquefied petroleum gas (LPG) vehicle market registered sales of 56.2 million units in 2019, which is expected to grow at a CAGR of 5.9% during the forecast period (2020–2030). The major factors responsible for the growth of the market include increasing adoption of clean-energy vehicles and ability of CNG and LPG vehicles to replace conventional vehicles. These vehicles are also economically productive in long run and are also value for money for customers.

The COVID-19 pandemic has negatively impacted almost every industry, worldwide. The impact of COVID-19 is severe on the automotive industry as a whole, including the production and sales of CNG and LPG vehicles, due to the lockdowns and closure of production facilities, and also affected by government priorities to divert focus toward more pressing social and economic issues. 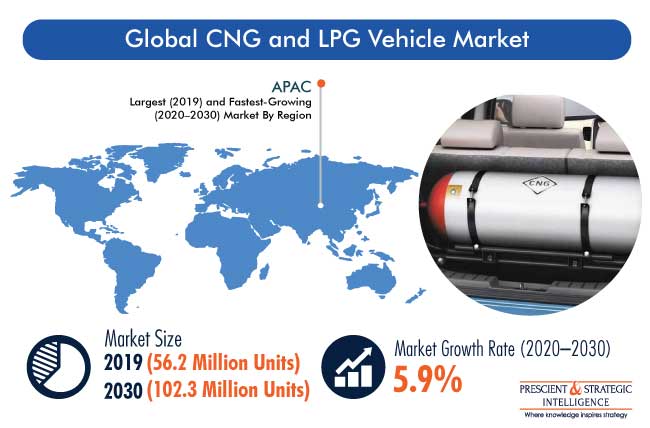 CNG Category to Witness Faster Growth During the Forecast Period

Based on fuel type, the CNG category is expected to hold larger market share by 2030 and is projected to progress with higher CAGR throughout the forecast period. The adoption of CNG vehicles for mobility especially in developing countries of APAC is the prime factor that drives the growth of the CNG and LPG vehicle market in this category.

Based on vehicle type, the passenger cars category is projected to hold the largest market share by 2030. The growth can be primarily attributed to the increasing adoption of CNG- and LPG-based passenger cars, and government initiatives for reducing air pollution.

Globally, APAC held the largest share, in terms of volume, in the CNG and LPG vehicle market, in 2019. This is attributed to the high growth in the automotive industry in countries such as China, Japan, South Korea, and India. China has been the largest market for CNG and LPG vehicles in the world, with continued dynamic growth.

Vehicles that run on CNG and LPG have lower fuel costs, in comparison to conventional fuel vehicles, such as gasoline and diesel vehicles. In Europe, CNG cost ranges from approximately $1.50 to $2.80 per gallon on a gasoline-gallon equivalent basis, which results in decrease of 40–75% of fuel cost, in comparison to the cost of diesel or gasoline. Businesses using CNG-fueled trucks often see payback on the conversion cost in as little as 24–36 months of use. In the U.S., LPG costs approximately $2.00 per gallon, which results up to 50% cost savings per gallon, as compared to gasoline and diesel. Other benefits of LPG include LPG refueling systems typically cost less to install and LPG fuel tanks are smaller than CNG, which results in less loss of cargo or passenger capacity. Thus, low running costs of CNG and LPG vehicles as compared to gasoline vehicles would eventually fuel the demand for these vehicles, worldwide.

In 2019, the e-commerce industry accounted for around 14% of all retail sales, as compared to 10% in 2017. The industry is growing at a tremendous rate, across the globe, therefore, representing a rising share in the overall retail market. Furthermore, it is projected that e-commerce sales will reach around 25% of retail sales, worldwide, by 2025. Thus, with the growing e-commerce industry, the demand for more greener vehicles is expected to increase. Therefore, several companies are relying on cheaper and greener transportation options, in order to be more responsible toward environment. However, burgeoning of electric vehicle (EV) industry might pose a challenge to the market, but higher down payments and costs of EVs are still the major issues for many fleet owners and passenger car owners. Thus, with the expansion of e-commerce industry drives the demand for CNG and LPG vehicles.

In recent years, the players in the global CNG and LPG vehicle market have been actively involved in mergers and acquisitions to stay ahead in the competition.

Some Key Players of CNG and LPG Vehicle Industry Include:

The CNG and LPG vehicle market report offers comprehensive market segmentation analysis along with market estimation for the period 2014-2030.

Frequently Asked Questions About This Report
What is the predicted sales volume in the CNG and LPG vehicle market?+

Which is the more-popular fuel in the CNG and LPG vehicle industry?+

LAMEA offers the most-lucrative opportunities in the CNG and LPG vehicle market.

Why is the CNG and LPG vehicle industry growing?+

The CNG and LPG vehicle industry is driven by the low running cost of such automobiles and prospering e-commerce sector.

How many segments are there in the CNG and LPG vehicle market report?+