The global carbon capture, utilization, and storage market size was valued at $2,037.0 million in 2021, and it is expected to advance at a CAGR of 27.3% during 2021–2030, to reach $17,835.6 million by 2030. The major factors accredited for the growth of the market include the growing focus on reducing carbon emissions along with government initiatives toward achieving carbon neutrality by 2050, and the rising demand for CO2-EOR techniques.

However, the market experienced a negative impact of the COVID-19 pandemic, as manufacturing facilities were closed during the period. But companies have announced investments in carbon capture, utilization, and storage (CCUS) projects, depicting the future growth of the market. For instance, more than 35 projects were announced in 2020, up from 18 projects in 2019.

The capture category, based on service, accounted for the largest market share in 2021, since it is the first stage of the CCUS process and is the largest cost component in the process. 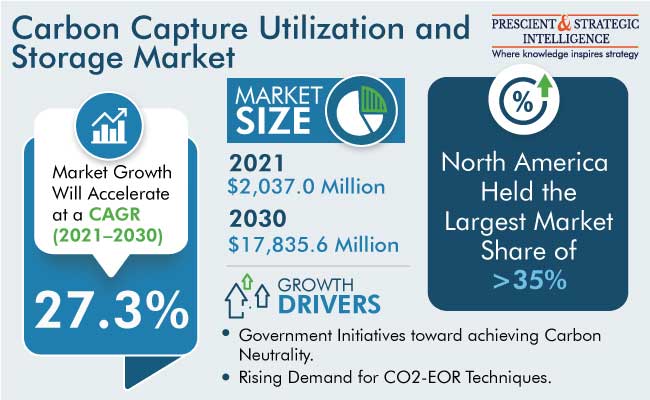 Pre-combustion technology dominates the market; however, the demand for post-combustion technology is projected to rise at a significant CAGR, of 27.6%, during the forecast period. This growth can be attributable to the rising number of power plants in developing nations, such as India and China. This technology is the most viable method for separating carbon dioxide from exhaust gases produced by burning fossil fuels for power generation. 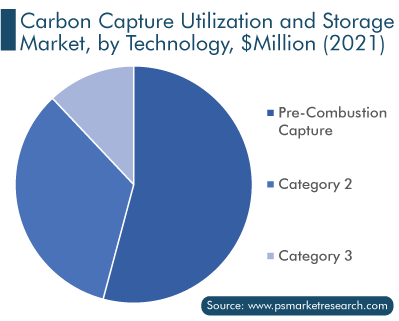 Power generation is the largest end-user category, accounting for around 40% of the market share in 2021. This is because more than 40 CCUS power generation projects are currently being developed across the globe, with most projects related to gas-fired and coal-fired power. However, the oil & gas category is expected to witness the fastest growth during the forecast period, as carbon capture, utilization, and storage have opened various opportunities such as enhanced oil & gas recovery from dwindling gas formations, ethanol production, oil & gas refining, low-carbon hydrogen generation, and direct-air capture. 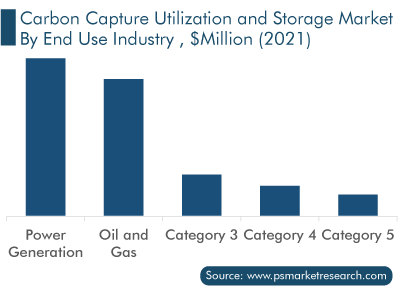 The North American carbon capture, utilization, and storage market accounted for more than 35% revenue share in 2021 and it is expected to maintain its position during the forecast period as well. This is ascribed to the increasing demand for products and fuels with a lower CO2 footprint and the surging integration of CCUS projects with planned liquified natural gas projects in the region. Also, public and private organizations are investing in the development and commercialization of technologies that capture carbon from flue gas streams, which, in turn, is supporting the growth of the market.

In the region, the U.S. accounts for a larger market share. This is because of the national government incentives along with regulations for CCUS projects. The government offers incentives through the 45Q tax credit, which provides $36 per ton of carbon dioxide retained in geological reservoirs or $24 per ton of carbon dioxide used in EOR for other purposes, as of 2021. Moreover, the country has 12 commercial facilities, which capture around 20 Mt of CO2 per year.

However, the Canadian market is likely to progress at a significant CAGR during the forecast period. The increasing capital investments in CCUS projects, which totaled $257 million in 2020, have been the major driving force for the market in the country. Moreover, the Canadian Budget 2021 proposed a tax credit for capital invested in these projects, with the goal of lowering CO2 emissions by at least 15 Mt per year.

In addition, Europe is the second-largest market, globally. It has around 35% of the total projects in development worldwide. In fact, the U.K. has planned to establish four CCUS industrial clusters by 2030, capturing 10 Mt of CO2 per year, and announced an infrastructure fund of $1.23 billion. Moreover, Norway is committed to $1.8 billion to the Longship project, which includes the Northern Lights offshore storage hub; while the Netherlands dedicated $2.11 billion to the Porthos CCUS hub at the Port of Rotterdam.

On the other hand, the APAC market is expected to witness the fastest growth during the forecast period. This is because the majority of new projects are emerging in developing countries, where emissions are high. Moreover, the region has suitable geology for carbon sequestration, adding advantages for companies to set up their projects in APAC.

China is targeting to achieve carbon neutrality before 2060, and the government is framing policies for the same, resulting in the setup of CCUS plants in the country. For instance, in 2021, China constituted around 6% of the new project developments. Also, the Ministry of Ecology and Environment (MEE) announced its support for CCUS pilot and demonstration projects in free trade zones in May 2021. Moreover, the country issued low-cost loans worth $13.41 billion to financial institutions for reducing carbon emissions in 2021.

Investors and venture capital companies are investing in carbon capture startups, which are involved in the development of new and innovative carbon capture technologies. For example, VC-backed startups received an investment of more than $325 million in 2020, which increased by approximately $75 million as compared to 2019, despite the COVID-19 pandemic.
A few recent investments include:

Also, commercial approaches for the deployment of CCUS solutions have turned away from huge, stand-alone installations, toward the creation of industrial hubs with shared CO2 transport and storage infrastructure. With new business models focusing on transportation and storage services, the setups have high economies of scale and low commercial risks.

In recent years, major players in the market have been largely investing in carbon capture projects and expanding their capacities in view to attain a net-zero energy system. For instance:

Key Players in Carbon Capture, Utilization, and Storage Market Are:

Based on End-User Industry

Frequently Asked Questions About This Report
What was the size of the carbon capture, utilization, and storage market in 2021?+

What will be the growth rate of the carbon capture, utilization, and storage market during the forecast period?+

Which is the largest end user in the carbon capture, utilization, and storage market?+

Power generation is the largest end user in the carbon capture, utilization, and storage market.

What are the major drivers for the carbon capture, utilization, and storage market?+

The major drivers of the carbon capture, utilization, and storage market include the surging focus on reducing carbon emissions and the increasing demand for CO2-EOR techniques.