The global carsharing market is estimated to value $5,571.2 million in 2018 and is expected to advance at a CAGR of 11.0% during the forecast period. The market growth can be mainly attributed to advancements in technology facilitating simplified access to shared mobility services. Additionally, the increasing demand for cost-effective and convenient mobility services, along with favorable government policies encouraging the adoption of carsharing programs, is contributing to the growth of the market.

On the basis of car type, the carsharing market is categorized into economy, executive, and luxury cars. In terms of volume, economy cars are estimated to hold the largest share in the market in 2018, owning to the high fuel economy of these cars, which encourages their adoption for carsharing services. Furthermore, increasing gasoline prices and rising environmental concerns have driven the demand for these cars globally.

Based on fuel type, the carsharing market is classified into electric and fuel-based cars. Of the two categories, fuel-based cars are expected to continue dominating the market in terms of volume. However, with the increasing initiatives toward environmental protection coupled with the electrification of vehicles, carsharing is expected to result in reduced fuel consumption in the near future. Besides, due to low maintenance costs, electric cars are expected to witness increased adoption in the market in the coming years.

Geographically, the APAC region held the largest share in the carsharing market during the historical period, with an estimated revenue of over 40% in 2018. China continues to remain the largest market for carsharing services in the world. In 2017, several cities across China increased the usage of electric vehicles across carsharing platforms to promote greener environment. With continuous support from the government in the form of policies and incentives, the market in China is expected to demonstrate robust growth in the near future as well.

Rising concerns over environmental protection and greenhouse emissions are resulting in the increased adoption of novel mobility solutions, thus supporting the growth of the carsharing market globally. Environmental agencies’ concerns over air quality degradation caused by the increasing amount of exhaust fumes from vehicles are paving the way for various government initiatives globally. Greenhouse gas emissions from urban vehicles have led to the formulation of stringent environmental policies by the governments across the globe. Countries are taking initiatives to curb emissions by reducing the ownership of private vehicles. Carsharing service has been viewed as an effective antidote in this regard to curb the impact of pollution on the environment. Increased use of carsharing services would help reduce the number of private cars on the road, thereby minimizing the amount of carbon dioxide emitted into the environment.

Limited internet penetration across the world is one of the major factors restraining the growth of the carsharing market. The mechanism of carsharing services is completely dependent on the internet, where all activities, from registering through booking to making payment, are done over a mobile app. However, more than 50% of the world’s population is still deprived of the internet, with Africa and Asia having the lowest access rate globally.

According to a United Nations report, over 3.58 billion people out of the total population of 7.6 billion still do not have any access to the internet, globally. Africa has the lowest percentage of internet penetration, with only 21.8% population having access to the internet. Thus, there exists a huge gap in connectivity owning to inadequate infrastructure, unaffordability, and lack of skills, which adversely affects the growth of the carsharing market.

Over the past few decades, urban population in many developing countries, including India and China, has risen significantly. The greater concentration of urban population in large cities has resulted in the increased adoption of fuel-based vehicles, further leading to the generation of higher air pollution levels and longer commuting time. The scenario, however, is quite favorable for the implementation of carsharing services in these countries.

Moreover, many developing nations are actively investing in clean energy transportation systems, thus signaling carsharing companies to extend their services in these countries. For instance, in China, the government is making heavy investments in electric charging infrastructure, with the aim to establish over 10,000 charging stations by 2020. Besides, governments in other APAC countries are enforcing stringent regulations to curb the ownership of personal vehicles and working toward the development of more efficient road networks with the addition of electric cars, thus offering ample growth opportunities to the players operating within the carsharing market. 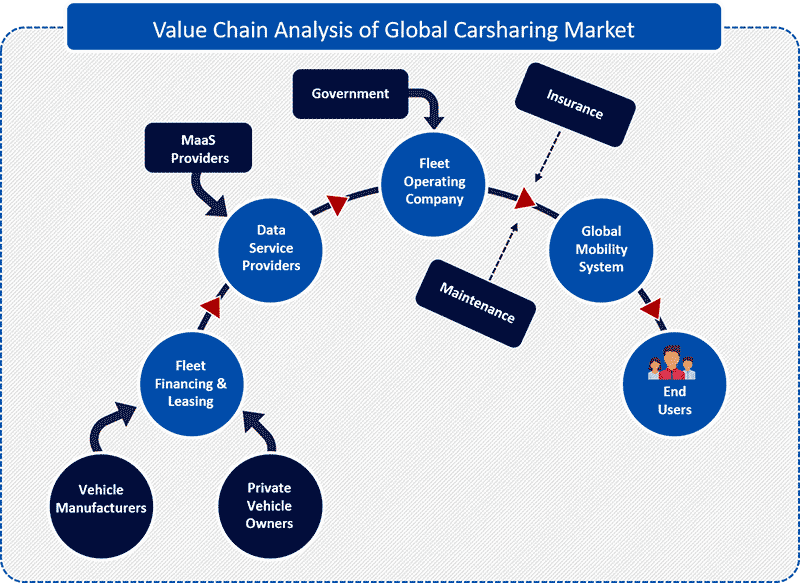