The global camouflage coating market size stood at USD 207.3 million in 2022, which is expected to reach USD 549.4 million by 2030, advancing at a CAGR of 13.10% between 2023 and 2030. This is primarily attributed to the increased demand for cutting-edge camouflage layering requirements in the defense sector. 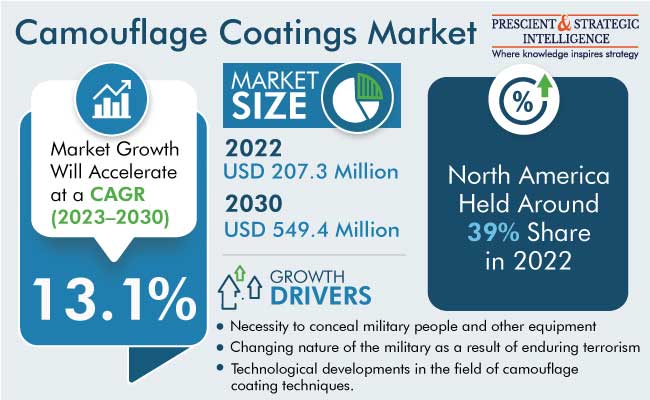 The industry is also influenced by the need to conceal military personnel and other pieces of equipment as well as the evolving nature of the military as a result of persistent terrorism and high-intensity geopolitical conflicts. Additionally, the market is positively impacted by the quick rise in R&D investment, expansion of defense modernization initiatives, rise in the demand for ground defense systems, and active participation of various nations in counterterrorism operations.

The main purposes of adding such paint layers to equipment are to protect, preserve, and enhance such products. Additionally, this coating helps improve durability and develop extra specialized qualities like fouling resistance, wear and tear resistance, and corrosion resistance. As a result, it has gradually moved away from its traditional uses as finishes and aesthetic elements to techniques of surface treatment, which give value to camouflage coating-based products.

The market has recently been revolutionized by smart coatings, and there is now a significant need for military coatings. Modern aircraft and military systems place a strong emphasis on developing new techniques and cutting-edge equipment that will enable them to avoid optical detection as well as radar and infrared sensors. Governments and defense organizations have recently invested in camouflage technology in an effort to address this problem.

Worldwide military spending continued to grow in 2021, reaching an all-time high of USD 2.1 trillion. This was the seventh consecutive year the spending increased. Countries are augmenting their spending for modernizing their defense forces by procuring advanced products. For instance, in 2021, Russia’s military spending rose by 2.9% and reached USD 65.9 billion, at a time when it was amassing its forces along its border with Ukraine. This was the third consecutive year Russia’s military expenditure rose. In 2021, the spending was 4.1% of its GDP.

Similarly, China, which is the second largest spender on defense in the world, allocated around USD 293 billion to its military in 2021, which was 4.7% more than in 2020. China’s military spending has grown for 27 consecutive years. Similarly, India’s military spending, which stood at USD 76.6 billion, was the third-highest in the world. This was a 0.9% increase from 2020 and 33% more compared to 2012. In order to strengthen its indigenous arms industry, the government earmarked 64% of the capital outlays in the 2021 military to produce arms manufactured within the country.

The increase in the military spending by the major economies can be attributed to the rise in the count of geopolitical conflicts and increase in the demand for defense equipment, as a result. Hence, the increase in the defense budgets of various countries, such as the U.S., India, Russia, China, Saudi Arabia, South Korea, and South Africa; outbreak of new conflicts, and the need for advanced military vehicles for handling critical situations will aid in the expansion of the camouflage coating market in the coming years.

Based on product, the market is classified into primer, topcoat, and others. The others category primarily includes sealants, adhesives, and other pre-treatment products. In terms of revenue, the topcoat category held the largest market share, of 45.6%, in 2022. Additionally, it will be the fastest-growing category, with a CAGR of 13.62%, from 2022 to 2030. This is attributed to the functional application of topcoats, which not only provide protective coating but also reduce heat signatures from aircraft and other pieces of equipment, thus providing thermal camouflage. 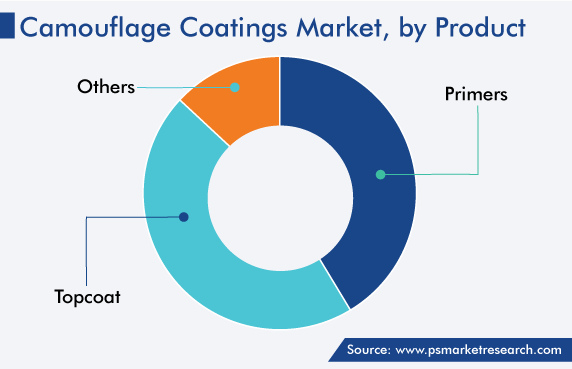 Liquid Form To Remain on Top in the Industry

Based on delivery method the market is categorized into liquid and powder. The liquid category is expected to hold a larger revenue share and will remain largest revenue share holder in the coming years. This can be because liquid coating contributes to the development of a robust finish that is uniform and thin. Also, there are stringent requirements for any product's paint job when it comes to military equipment. In addition, liquid coatings typically offer a crisp finish and consistency across layers.

However, liquid layering requires some time to cure, and the process is greatly influenced by a variety of variables, such as the weather. The demand for liquid variants is mostly a result of the consistency in an application, which is a crucial necessity in the military sector. Large areas may be easily coated while preserving thickness consistency by liquid variants, which also offer stability over an extended period of time.

Solvent-based alternatives, which outperform water-based ones in terms of demand, fall under the category of liquid coatings. The aircraft sector primarily uses solvent-based type because it is resistant to extreme weather. However, during the projection period, it is predicted that VOC limitations on solvent-based coatings as well as the advancements in formulation technology will drive the demand for water-based coatings.

Based on application, the market is divided into defense and others. Of these, the defense category held a larger revenue share in 2022, and it will also witness faster growth, advancing at a CAGR of 13.24%, during the forecast period. This will be due to the rising concerns over security issues. The popularity of these materials in both military and aircraft applications is growing as a result of recent advancements in the defense industry and the inclination of different military units to deploy them on the battlefield.

The defense category is further classified into military, aircraft, and textile. Among these, aircraft is the fastest-growing category, with a CAGR of 13.92% from 2023 to 2030, and it will continue to be the largest revenue contributor till the projected time. The fresh and inventive technological developments occurring in the realm of camouflage coating techniques are responsible for this expansion.

Worldwide, military aircraft systems have been used for a range of missions, including border security, counterterrorism and counterinsurgency, drug enforcement, piracy and smuggling prevention, environmental protection, and firefighting. A drone is deadly in modern combat thanks to technological developments like optical image sensors, precise operations with enhanced GPS, and stealth operating tactics. Additionally, defense firms are continually implementing fresh technology to strengthen their defensive capabilities. Military planes also continue to be painted in camouflage patterns. Another element propelling the market growth is the rising need for camouflage-coated aircraft.

The need for such paints varies according to different geographical regions. The market holds a bulging share in several nations of North America, Asia-Pacific, the Middle East and Africa, South America, and Europe. North America's revenue contribution to the worldwide market in 2022 was the largest among the regional markets. Numerous factors, including the aim of defense agencies to update their equipment and massive spending in the defense industry, have contributed to the market expansion in the region.

The U.S. is currently a larger revenue-generating country in the North American camouflage coating market. This is attributed to technological advancements, extensive investments for dedicated R&D facilities, and the presence of major defense equipment companies in the country. Additionally, due to the wide-scale production of paints & coatings as well as technological advancements, the U.S. market is expected to grow at a steady rate.

During the projected period, the APAC market is expected to witness a high CAGR in the coming years. This can be because the majority of countries in the region have increased defense expenditures significantly in recent years. Additionally, as terrorist activity in the area has increased, military organizations have been forced to use effective camouflage-coated equipment for improved stealth. 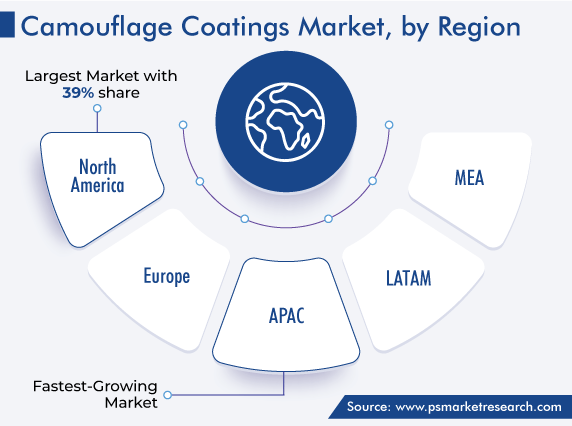 Top Players in the Camouflage Coating Market Are:

This fully customizable report gives a detailed analysis of the camouflage coating market from 2017 to 2030, based on all the relevant segments and geographies.

Based on Delivery Method

Frequently Asked Questions About This Report
What was the size of the camouflage coating market in 2022?+

The camouflage coating market size stood at USD 207.3 million in 2022.

What will be the growth rate of the camouflage coating market during the forecast period?+

Which is the largest application area in the camouflage coating market?+

Defense is the largest application area in the camouflage coating market.

What are the major drivers for the camouflage coating market?+

The major drivers of the camouflage coating market include the necessity to conceal military people and other equipment, as well as the changing nature of the military as a result of enduring terrorism and fierce geopolitical battles, and technological developments in the field of camouflage coating techniques.